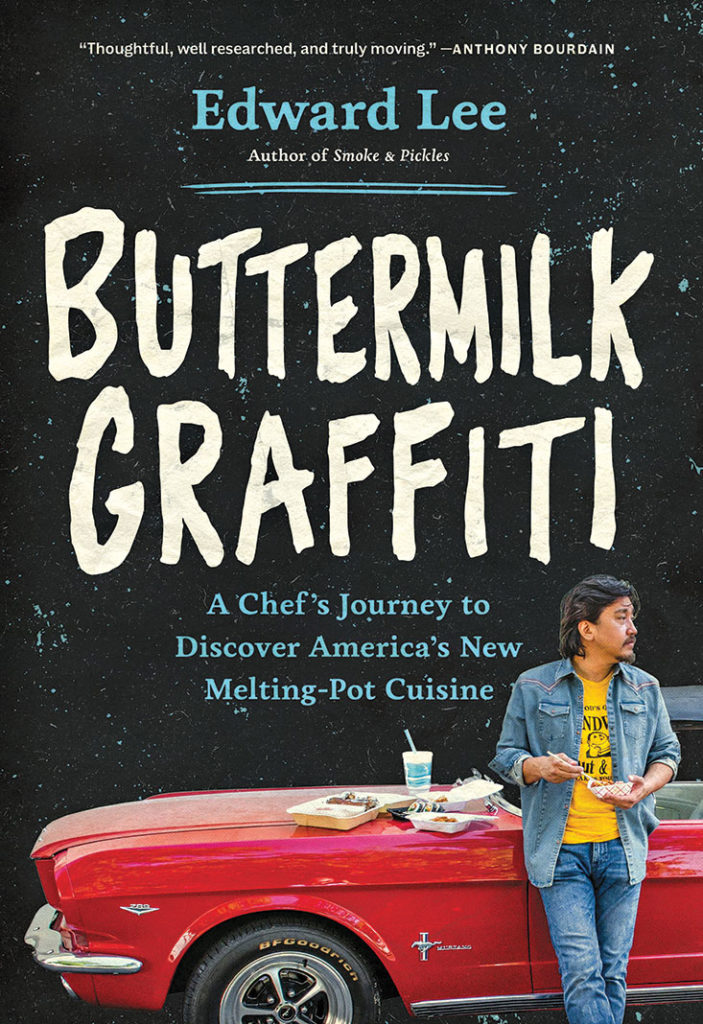 Chef Edward Lee has been in Louisville for a decade and a half. Over that time, he’s founded, owned, and/or directed multiple restaurants in town, as well as in his other place of regular residence, Washington, D.C. But there’s also merit in saying that Lee belongs everywhere, as he’s quite the celebrant of America as mixing bowl. Wonderful evidence for this is his new book, “Buttermilk Graffiti,” which is cause for his coming to Carmichael’s Bookstore for a reading/signing this week.

This is Lee’s second book, and the chef recounts the variety of people, places and meals in his travels across the country in recent years. He is particularly concerned with how communities have influenced each other’s diets. Recent immigrants might bring in new ingredients or processes that gradually are found to complement local food traditions. Or there could be an imaginative junior chef at an influential eatery, returning after some time away and looking to add (figurative) zest to an established menu.

In one of the winning prose essays here, Lee shows what happens when he asks stars of Montgomery, Alabama’s soul-food scene to see what they can do with some Korean menu staples. Another standout chapter has Lee and his wife touring Wisconsin’s German restaurants, pondering whether, and how, cuisines might be perceived as stale. And there’s a wrap-up appreciation for some unheralded Louisville chefs. The book also includes a modest number of recipes. Lee recently let LEO ask him some wide-ranging questions over the phone.

LEO: What is the food discovery since you’ve been in Kentucky that you continue to eat most often?

How are you on burgoo?

I haven’t really had a version that I’ve truly liked. I think what I’m missing is the wild game in there. If I’m correct, the original burgoo is the stew of wild game — squirrel or rabbit, or whatever critter you’d found out of your backyard. When we start to use commercialized, farmed animals, it’s not going to have the same flavor.

You went to New York University for English? Do you recommend that on a career ladder instead of a culinary institute?

No! As the first son of an immigrant family, it was very important that I graduated college. I did that — and then I had no money for culinary school. I graduated with Latin honors and got a job peeling potatoes and washing dishes for $6.50 an hour — but many years later it worked out.

This book definitely shows the value of going out to eat in varying cuisines — and trying to strike up a conversation with the staff or regulars there.

There’s two kinds of restaurants for me, right? There are chef-driven established restaurants where you go for the décor and the music and the lighting and the food. And then a lot of the restaurants that I visited are what I call ‘community restaurants.’ They’re really built specifically for a community — usually an ethnic one. [For example,] the Cambodians — it’s a nice restaurant, but they’re building it for other Cambodians. There’s an immigrant population in that town that wants it and needs it.

Usually these places have a wall with business cards that people will put up for accountants and music and babysitting services. It becomes a community center. Those restaurants function differently than the ones I run. These places are special, and they really give you a window into a culture. They may seem awkward and intimidating at first — but I truly believe that if you walk in there with respect and with humility, they’re very warm and inviting.

You refer to an ‘intricate lineage’ in an evolving American culture. Do you get pushback from people who brace against ‘cultural appropriation?’

When I go into the soul food restaurant and I bring some Korean food to try — not that they’re going to change the menu, but it becomes an act of participation on both sides. Once you become a participant in that way, guess what? People trade recipes back and forth. The idea of cultural appropriation in food, to me, is so silly — that’s all we’ve been doing since time’s beginning. All cultures have been rubbing up against each other, and sharing, and creating these fusions, if you will, of food. The important thing, I think obviously, is to give credit where it’s due, and to give respect and do it out of a sense of honor and community.

Food writing and media entertainment around chefs have increased amazingly over recent decades. Is it permanent?

I think there’s an entertainment portion of it, which can always go up or down. But I think the difference is we’re changing food laws and policy. We’re changing how we eat. Healthy eating is crossing all demographics. Every town, every city, every culture is going at its own pace — but I see it everywhere.