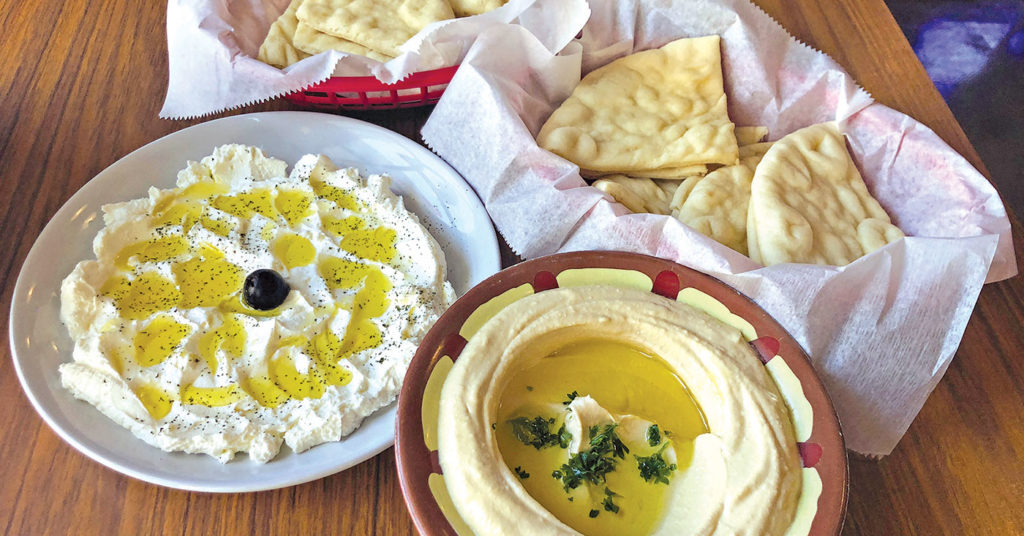 I love labneh, the thick, tangy, strained-yogurt cheese of the Eastern Mediterranean. It was a treat to get a dab of labneh, dotted with pumpkin seeds, atop a risotto at Marketplace on Theatre Square last week, but a bite only made me want more. So we headed over to the highly regarded Aladdin’s Cafe in New Albany, where you can get the stuff in a sandwich or on a plate.

We came for the labneh, and we ate all the food, or a good share of it anyway.

Aladdin’s — which our server told us is not connected with the recently arrived Aladdin’s Cafe Louisville on Bardstown Road — fills one side of the charming Underground Station complex, located at the foot of Bank Street.

Although the family that owns Aladdin’s is Jordanian, the menu comprises pretty much the usual suspects found at the metro area’s many restaurants serving the cuisines of the Mediterranean countries from Greece to the Levant and Egypt: gyros, falafels, shawarma, kibbeh, kebabs and you get the idea.

But the way they put the dishes together is amazing. Aladdin’s is not just another gyros joint but a simple restaurant turning out appetizing, thoughtfully prepared dishes that reveal a serious chef in the kitchen. Dishes are prepared to order, prompting the menu’s warning, “to maintain the quality and freshness of your meal, your patience will be greatly appreciated.” That said, however, we were in and out in just under an hour.

The multi-page menu starts with about 18 appetizers that range from $5 (for a feta plate, rice, fries, onion rings or even a plate of fried pickles) to $23 (for a lavish mazza sampler plate with your choice of five from a dozen apps). A dozen sandwiches are $7 (for that labneh sandwich) to $12 (for double gyros, with twice the usual amount of meat and toppings on an oversized pita). Eight meals, main-course portions, plus choice of rice, fries or onion rings are $11 (for falafels or chicken shawarma) to $16 (for the double gyros, again, with sides).

There’s a short beer list (including a few local craft brews) and a shorter wine list, but I was intrigued by the more exotic song of Turkish coffee ($4), served the traditional way with a long-handled metal pourer. Thick and strong, full of grounds that have to be given time to settle, it was dark, rich and intriguingly scented with cardamom.

I was still jonesing for labneh, so went for the full plate, an $8 appetizer. The thick, creamy white cheese reminded me of quality whole-milk ricotta in texture, but its yogurt base added a tangy high note to the sweet dairy flavor. It was spooned onto a shallow dish and generously topped with fruity greenish olive oil, with a single black olive for garnish,

I usually say ho-hum hummus, but Aladdin’s version ($7) may rank as the best I have ever had. Remarkably creamy and smooth, it boasts a rich tahini-to-chickpea ratio, and I’m fine with that. Both apps came with plenty of excellent, thick and fluffy pitas.

Sandwiches are also built on excellent pita. A fine gyros ($7.50) was loaded with a tasty rendition of the traditional blend shaved from a sizzling block of mixed beef and lamb, cut off in thick strips about the size of slices of bacon. The meat was crisp from the fire on the edges, and tender within. A generous portion, with plenty of sliced onion, shredded iceberg lettuce and a few tomato chunks, was rolled into a pita dressed with rich, thick tzatziki sauce and rolled with wax paper.

A falafel sandwich ($7.50) was served similarly, with the gyros meat replaced with amazing crunchy-fried falafels made from an unusual blend of chickpeas and fava beans, plus onions and aromatic spices. It was dressed with a pink tahini-tomato blend and enhanced with sliced onions and crisp chunks of pickle.

Chocolate lazy cake ($5) sounds like something straight from the pages of Southern Living, but it’s actually a Jordanian treat, also known as chocolate salami (I am not kidding about this), or sukseh. It’s a simple refrigerator cookie made of chocolate morsels, Marie cookies or tea biscuits and milk.

With a couple of apps, two big pita sandwiches and dessert, we pushed the tab up to $41.73 plus a 25 percent tip calculated by the point-of-sale system. •

Noise level: Conversation is easy, even with many tables occupied at lunch. (Average sound level 65-72 dB.)
Accessibility: Built entirely on the level, it appears to offer no obstacles to wheelchair users.