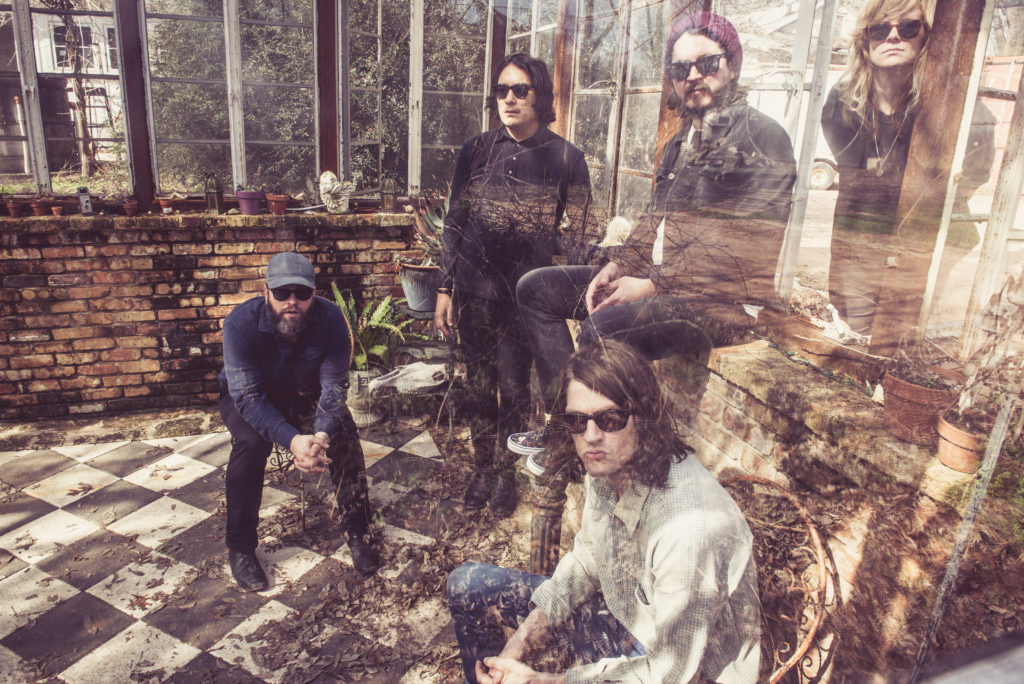 Black Angels frontman Alex Maas sings everything with his eyes closed, although you wouldn’t ever know it behind the ever-present amalgamation of colors and visuals during their concerts. Their live performances, highlighted by the psychedelic Mustachio Light Show, are heightened sensory experiences paying homage to the mixed medias employed by Syd Barrett-era Pink Floyd and early Velvet Underground. Maas closes his eyes at these times, recounting what the lyrics bring to the surface, usually in a red-orange hue. “When I’m in the room with the band and hearing them play, a lot of things are tinted in that brownish, orange-tinged kind of reddish-brown color. And I don’t know what that is. What does that mean?”

The answer is relevant to one consistent subject in their music: concerns of the unknown. Navigating on those universal uncertainties is The Black Angels fifth studio album, Death Song. Released in April 2017, the album is familiar sounding, with its heavy flow of reverb and assertions against greed (“Currency”), guns (“Don’t Play With Guns”) and big pharma (“Medicine”). It’s the open-ended closer “Life Song” that invites a deeper dive, Maas’s voice cascading like a distant echo: “I’m traveling upside-down into a world of the unknown…”

LEO caught up with frontman and guitarist Maas before they begin a North American tour with the Black Lips, which includes a stop at Mercury Ballroom on Thursday, March 29.

How did you end up teaming with Black Lips for this tour?
I’ve been a fan of the band since they got started. I’ve seen ‘em a bunch of times. We booked them at Levitation a couple of times. We’ve been touring around each other… Last time we went on tour with Ron Gallo, Black Lips were a day behind us, or playing the same night in a lot of other cities. I was like damn, why we just don’t tour with them and make it like a traveling circus thing?

You all were writing material for Death Song leading up to the 2016 election, obviously a chaotic time that impact the topics addressed on the album. What other influences did you experience when making this album?
Typically, we’re drawn to the darkness and the unknown of the future, and the unknown of the world, and that is really stark in terms of inspiration for the creativity: the unknown, the uncertainty of the future, the uncertainty of what’s told to us by people who are supposed to be leading this nation, leading us. I feel like a lot of the concepts we talk about aren’t things that are fresh. These things have been problems for a long time, and we’re just addressing them. We have a song on our last record called “Don’t Play With Guns,” and everybody says it’s so current. Well, it was current when the first gun was created. Writing songs can mean different things from different angles. We never want to sound preachy, like our way is the right way. It’s about encouraging people to find out the truth themselves, and encouraging people to seek out truth, and question authority.

You said in our previous interview in 2011 ‘… it’s the music first, then we’re just telling the story of what the music is telling us.’ Does that still hold true?
That’s how we still write. It’s easy for us to have these pictures in our head about what the song is about, just by the way it sounds. The tricky part is you’re still trying to make sense of the puzzle, right? What do these images mean in your head? It’s one thing to have them, but it’s another thing to intelligibly have people perceive them. The tricky part about song crafting is relating to a lot of different people and having people understand what your vision is. Vision-to-vision, for us a lot of times comes through the music itself.

You’ve also mentioned seeing visions of color?
I definitely think that colors are involved in sonic expression, and we’ve always seen music that way. In one way, certain songs have certain colors — that’s a purple song, or that’s a green song — in terms of when I’m in the room with the band and hearing them play, a lot of things are tinted in that brownish, orange-tinged kind of reddish-brown color. And I don’t know what that is. What does that mean? I have no idea.

There are a lot of times where I’m going through these different scenarios in my head when I’m singing, like recounting a story. And regardless of the color, the interesting take for me from that whole thing is how draining it can be to go from one song to the next — having to go through one song and it’s about heartache and 18 different relationships gone wrong, and you go through every single one of those relationships in three minutes in your brain. Then you go to the next song about something else. But that kind of up-and-down between, it’s probably something a lot of musicians find difficult to navigate. Knowing that something that happens is half the battle, navigating that kind of chaos.