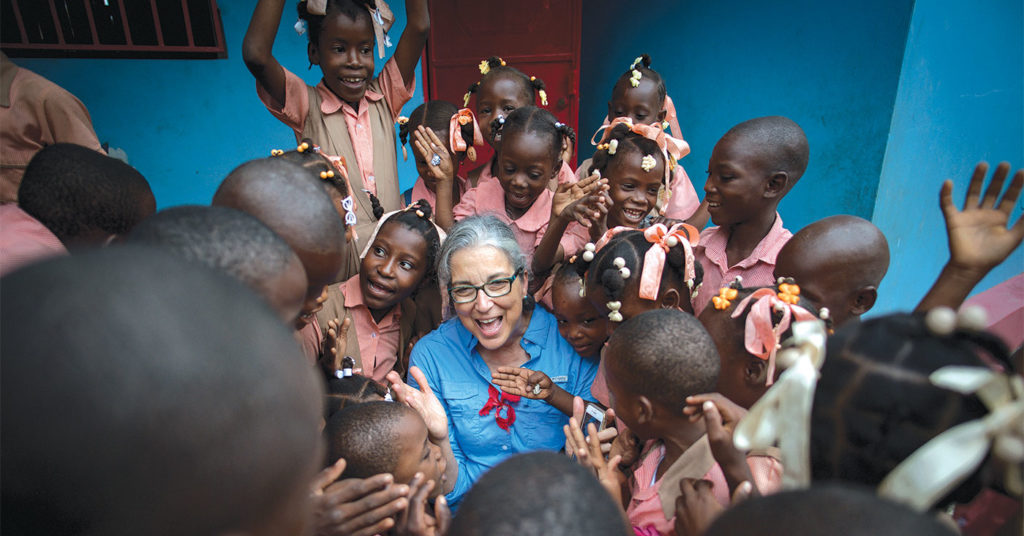 VERRETTES, Haiti — In dusty schoolhouses and under tropical timber, Haitian mothers told stories of desperation and sacrificial love that I suspect most Americans could hardly fathom.

Neighbors who carried a woman’s husband on a makeshift tree-limb stretcher two hours down the side of a mountain — all while cholera-tainted fluids from his body dripped on the good Samaritans. They disregarded their own risk of infection to save him.

The young wife who saw her husband waste to nothing and die overnight from cholera. She watched as the light left his eyes.

The mother who bought Clorox bleach at an open-air market to sanitize her family’s water instead of food to feed her children.

They walked miles in flimsy sandals, juggling jerrycans and tired toddlers, themselves worried and weary. Their stories of cholera were not the sum of them, though those are the ones I asked them to tell. They had families, aspirations, and convictions. They also had names: Marielitha Philostene, Elda Servius and Christiana Neyil.

Sister Larraine Lauter, an Ursuline nun from Middletown, Kentucky, stood in the crowd, her gray hair and glasses peaking over the heads of even the men. For the past 10 years, she’s led an organization called Water With Blessings that has brought clean water to villages like these around the world.

Now, Water With Blessings is embarking on an audacious plan to eradicate cholera in Haiti — an effort even the United Nations hasn’t accomplished.

“You have to put it out there and see if other people believe in it,” Sister Larraine said. “And that, too, is a sign of God. It’s a sign of the spirit. If I’d said something that crazy and ended up being the lone wolf saying it, logistically it’s not going to happen.”

Mothers as powerful agents of change

More than once someone has called her the Mother Teresa of Kentucky, a label Sister Larraine calls ridiculous, maybe bordering on sacrilege. The Roman Catholic Church takes sainthood seriously, after all.

“My religious community would roll their eyes at that,” she said. “We’re all called to imitate Mother Teresa, to imitate Jesus.”

And yet, to pull off the brazen plan she’s proposed, she’ll have to show the single-hearted drive of Mother Teresa and the unyielding faith of a mustard seed.

Nerve is one thing Sister Larraine has never lacked. For the past 10 years, she’s steered this small nonprofit from a storefront in Middletown. In that time, the group has raised more than $2 million and brought clean water to 45 countries around the globe.

In this nun’s mind, you’re either a disruptor or a loyal handmaid. You’re rattling the cage or bound by it, which may, to some, seem anathema to the calling of a nun. As she sees it: She’s obedient to God but dares the strictures of man. His will be done even if people say it’s laughable or crazy or downright impossible.

That’s why the Water With Blessings program recruits the least-powerful but most-dedicated resources in the world — mothers. The group equips them — now more than 60,000 across the world — with Sawyer PointONE filters. They’re about the size of the inside of a toilet paper roll and need no electricity. Yet they clear 99.99999 percent of bacterial contaminants. Cholera, diphtheria, typhoid. Instantly gone.

Those mothers — chosen by lottery — sign a covenant that says they’ll filter water for three other families. So a $60 donation for a filter that needs no battery and can clean up to 1 million gallons of water, helps four families, not just one. Those mothers then become powerful agents of change in their communities.

Water With Blessings has spiritual roots but welcomes people of every faith and no faith. As Sister Larraine likes to say: “I don’t care if you worship a palm tree. Anyone who’s willing to make a sacred promise is welcome to serve.”

During the first week of November, I flew with Sister Larraine and photojournalist Bryan Woolston to Haiti, the poorest country in the Western Hemisphere. We landed in Port-au-Prince to a haze over the mountains and the smell of burning garbage, familiar to anyone who’s traveled to the Third World. A three-hour drive brought us to Verrettes.

I listened as Sister Larraine assembled a team of Haitians who would implement the Village by Village plan. These Water Women, she told the group, would be heroes for Haiti. They’d be part of a new Haitian revolution. It was a kind of liberation theology at its most pragmatic and a collective narrative all Haitians identify with to their core: Theirs is the only country to liberate itself from slavery by insurrection. They had the power to change their country again, she told them.

Over the next eight days, we drove to Allaire and Dofine and Decouverte. One village was so remote, and the path so primitive, it took four hours to drive four miles. The team in Haiti often makes the trips on motorbike. And if the rains are too steady, they have to spend the night in a church or school rather than risk being stuck in the mud on the mountain.

Their relentlessness, devotion and uncompromising commitment to the cause will transform their country.

Hatching a Plan for Haiti

For a decade, Water With Blessings relied on a birdshot strategy: If someone needed filters, the group figured out how to raise money and send them — to remote islands and hard-to-reach mountains, to earthquake victims and to hurricane survivors.

But last summer, Sister Larraine started getting reports from partners in Haiti who ran clinics in tiny villages that had received filters. From January through May 2017, cases of waterborne illness went from 75 to 0. There was no more cholera.

So that got her thinking though she dared not say it aloud:

How much good could we really do with the right strategy and big money?

The push to find those answers came in short order. It was as if God himself were talking through people who crossed her path.

The first nudge came from a Lyft driver in Tampa — a fundraiser himself — who gave her a mini seminar from the front seat of his Datsun. He asked: “What would you do if you could really get your hands on some significant funding?”

“I’d throw everything I could at Haiti,” she told him.

And then she offered a silent prayer: OK, God. I’m paying attention.

The same day she met with Kurt Avery, president of Sawyer Products, the company that makes the filters.

He offered to fund Geographic Information System technology to pair with the program. That way, Water With Blessings would know for sure where cholera had been and when it was gone.

Sister Larraine laughed to herself and told God: Alright, alright. You don’t have to hit me over the head.

Three weeks later she was on her way back from Honduras when she saw a distinguished man in an expensive suit in the airport. He was surrounded by armed guards and television cameras. He seemed important so she took an empty seat next to him on the plane. The nervy nun chatted the whole way back to Atlanta with a man who turned out to be the former prime minister of Peru.

He was the first person to whom she confessed her idea: She wanted to eradicate cholera in Haiti.

He thought it could work. “If you were ready, you could go to the World Bank,” she remembers him saying.

The puzzle pieces began to form an idea in Sister Larraine’s mind: a tactical plan, GIS data and ideas for big money. So at a prayer meeting back home, she told the Water With Blessings team about her conviction. They responded with raised eyebrows and a blue Post-it note in the prayer bowl.

She couldn’t do it alone, she told them. She’d need a whole crew of crazy to pull it off. Were they in?

Stephanie Kornexl, in charge of partnerships at Water With Blessings, remembers Sister Larraine wagging her finger and saying: “I’m challenging you, God!”

“I remember feeling like it was a big moment,” Stephanie said. “Like we really were on the verge of something that was not of our own making.”

“It’s like I’m in a sailboat, and the winds change direction, and you try to stay on board,” he said. “… Is the idea a little bit crazy? It is. But Water With Blessings’ program — with the proper support — can that eradicate cholera? Yes.”

Thus, the Village by Village project was born, and within a matter of weeks, Sister Larraine assembled a team to travel to Haiti for the launch. They’d aim to raise $250,000 to equip mothers in 14 villages around the city of Verrettes with filters. If they could eradicate cholera in a confined area, maybe they could convince big donors — Melinda Gates, Warren Buffett, Oprah — to fund the project for the whole country.

It would cost maybe $30 million, a sum Sister Larraine deems modest given that more than $500 million has already been spent on vaccinations, awareness campaigns and sanitation improvements to wipe out cholera. The United Nations, the World Health Organization and many non-governmental organizations have made valiant attempts to contain and treat cholera. But because their main attack hasn’t been at the source — water — their efforts have been short-lived, she said.

Sister Larraine intends to work a miracle — and make history — by ensuring that every Haitian family has access to clean water through household water filters.

“Nobody has figured out how to just get everybody on clean water,” she said. “But we can. The strategy right now is to limit death. But there’s no will to just drive it out. We have that will.”

So far, nobody has told her it can’t be done. Mostly, they’re wide-eyed and say: You’re gonna do what?

Miracle in the Making

In four months, Water With Blessings has raised more than $138,000 toward that first quarter-million dollar goal, now up to $149,836. And Sister Larraine Lauter still hasn’t lost her nerve. It may take 10 years to do it, but she’s undaunted, she said.

She likens the plan to a story in author Mary Stewart’s trilogy on Merlin.

“It’s not about a special choosing or something. It’s just saying, ‘Have the intention to put yourself out there.’ I’ve always thought that there’s a spiritual truth to that. That if you dare, God will use you. And it may seem sometimes that you’re just being dragged in the dust behind a chariot.”

This Ursuline nun — the disruptor, the cage rattler, the possibility provocateur — wants to enlist more radical changemakers to eradicate cholera in Haiti. For Marielitha Philostene. For Elda Servius. For Christiana Neyil. And she’ll continue until the miracle is done.

Even if it feels like she’s being dragged in the dust. •

Kristina Goetz is a freelance writer in Louisville. She also handles media for Water With Blessings.

Want to learn more and help?

Go to waterwithblessings.org for more information about Water With Blessings and the Village by Village project.

To donate, go to: waterwithblessings.org/village-by-village