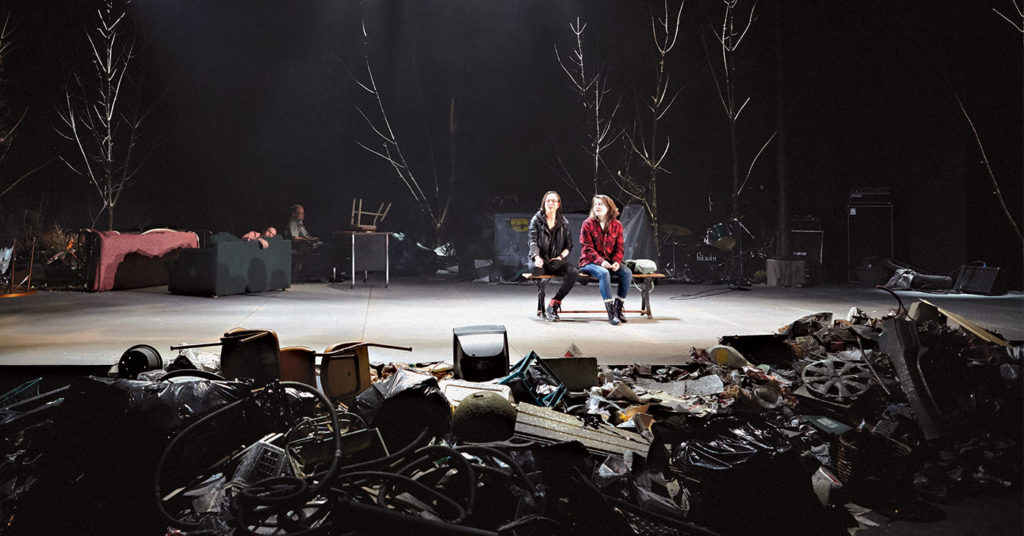 “Evocation to Visible Appearance,” the title of Mark Schultz’s new play, alludes to magic. Not the sweet eco-friendly, Wiccan magic found in, say, Dar Williams’s song “The Christians and the Pagans,” but a powerful strain of ancient magic that summons powerful spirits or demons to appear before and act directly on behalf of the witch. It’s a kind of magic that has been — and is — practiced, or at least feared, in cultures all over the world.

European Christians didn’t suppress such witchcraft because they thought it a silly superstition. They suppressed it because they thought it was genuine, powerful Satanic force in the universe. For Christians, requests for divine intercession are usually more abstract. They’re not based on evocation, but on invocation. Instead of casting a spell to summon the powerful, supplicants offer a prayerful request for intercession.

Abstractions can be thin stuff, though, especially in a mostly-illiterate culture. In the Middle Ages a form of liturgical theater sprang up that told the Christian story, from creation to the last judgment, in what we call Mystery Plays. For modern audiences, the Mystery Plays are arguably the least familiar form of Western drama, a weird relic of a period often wrongly called the “Dark Ages.” The Mystery Plays were didactic in that they traced the arc of the world from Genesis to Apocalypse — and vividly illustrated the consequences of sin along the way. Illustrations of sin are always more effective and cautionary if they’re vivid, ridiculous and offensive than if they’re serious, respectful or delicate. So you can rest assured that some of these plays were rude and cruel.

In one online biography, Mark Schultz is described as “a playwright and Episcopal seminarian.” And though my take is speculative, I think “Evocation” is an absurdist “Mystery Play” for our time. I concede that it doesn’t strictly follow a canonic liturgical framework… The title also riffs on a phrase from James Joyce’s stream of consciousness epic, “Ulysses,” “the ineluctable modality of the visible,” which signals the shape-shifting nature of the world. Rather the play focuses specifically on an apocalyptic question: “You wanna know what the future looks like?”

But this production, directed by Les Waters, has a fearsome grandeur that floods it’s decrepit, devastated set with gut-busting humor and chilling, heartbreaking despair.

The central figure is Samantha , played by Suzy Weller, a member of Actors Theatre of Louisville’s Professional Training Company. It is an extraordinary, career-defining performance that highlights not only her remarkable abilities but the impact the Roy Cockrum Foundation grant to the PTC is already exerting on the national theater scene.

Samantha’s journey begins with the revelation of an impossible pregnancy. That revelation immediately concludes her relationship with fast-food coworker and sex companion Trevor (Lincoln Clauss), a counterman with aspirations for college and dreams of becoming a celebrity idol.

The authority figures in Samantha’s life are her father Russell (Bruce McKenzie in a beautifully-wrought, hauntingly vulnerable performance) and restaurant manager Martin (Daniel Arthur Johnson), whose bureaucratically remote approach to caring about Samantha is a powerful, concise parable.

Samantha also has a sibling, the institutionalized, chain-smoking Natalie (Ronete Levenson) who is an extraordinary sibling foil. If you construe this play as a series of stations on Samantha’s journey, her final station with Natalie evokes Cain, Abel, Jacob and Esau in as unsettling a scene as you may ever see on stage.

Diana Grisanti’s superb “The Patron Saint of Losing Sleep,” directed by Shannon Wooley Allison in a riveting Looking For Lilith production, is also a contemporary morality play. Ada (Trina Fischer) is a compassionate, confused soul who was forced out of divinity school after she intervened on behalf of a fellow female seminarian (Laura Ellis) who was being harassed by a male faculty member (Sean Childress).

Now, Ada works in customer service at a property management firm where compassion is not policy. And her life is guided by the conflicting advice. Her self-help guru (Karole Spangler) wants her to quit her job (and have sex with her subordinate, played by Ke’leb Beauchamp). Her boss (Ebony Jordan) wants her to recognize that compassion is not company policy. (Except for Fischer, all the performers play multiple roles.)

This is a terrific play, entertaining, thought-provoking and ingeniously conceived by Grisanti and inventively staged by Allison and a crack tech crew, who give what amounts to a clinic in how to exploit the technical abilities of the MeX Theater at The Kentucky Center.

What you need to know about “Victor/Victoria,” the Pandora Productions revival of the Broadway musical based on the Blake Edwards movie, is that it’s a charming, fun, extravagant production. Also, it is grander in scope and sweep than anything Pandora has presented before — and that’s saying something, given this company’s remarkable track record.

Julie Evins is magnificent in the title role (with one of those rare, thrilling voices needed for the part). Amanda Kyle Lahti is great fun as the blonde vamp who accompanies the smitten King Marchan (Brett Gettelfinger). And Michael J. Drury cuts a fine figure in the iconic role of Toddy.

Director Jimmy Bohr and a cast of two dozen — plus a live sextet and an army of technical experts — have created an opulent, glittering delight. Warning: Tickets are scarce…

Speaking of live bands, over the last few years Wayward Actors Company has built a fine tradition of annual musical “revues.” Conceived and directed by Valerie Canon and performed with a live band, these thematic shows are always clever, interesting and well-executed. This year’s theme, “Unhindered and Ungendered: Minor Characters — Major Songs,” gives some great songs to cross the gender line.

The selections run the stylistic gamut from “Bloody Bloody Andrew Jackson” to “1776,” from “Kiss Me Kate” to “Spamalot,” from “Hedwig and the Angry Inch” to Falsettos.”

Frothy stuff — in a setting where frothy beverages are readily available… •