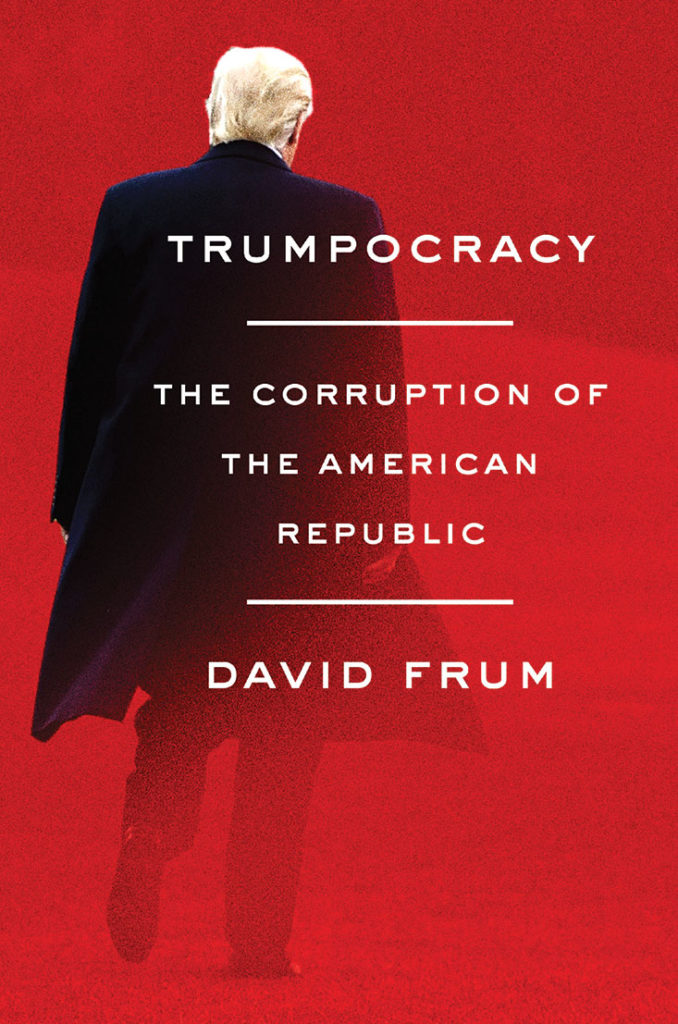 A major book concerning the Trump presidency is just coming out (and its very respected author is coming to town for the Kentucky Authors Forum). But in the scant weeks since the last significant book revolving around recent executive branch matters (“Fire and Fury”), there have been yet more noisy mini-crises — potentially making any book on the subject seem obsolete before the printer’s ink is dry.

Don’t bet against the potential impact, though, when the author of “Trumpocracy: The Corruption of the American Republic” is David Frum. Across nine books and many articles in The Atlantic, he’s bolstered a reputation that made its first big leaps on the shoulders of the neocon movement. (He was a speechwriter for George W. Bush.) In Frum’s new book — as might be expected in his conversation Wednesday — he hones in on a seeming dissolution of many American political institutions, rather than on one individual’s rise to precedent-shattering prominence. LEO recently had the chance to ask Frum about how he connects Trump administration controversies to history, as well as reasons he sees some optimism for even those who hold the record of this administration’s first year in great disdain.

LEO: President Trump is accused of using the word ‘shithole’ in a racist manner.

David Frum: The White House says the reason that they called [U.S. Sen.] Dick Durbin all those names is that he said ‘shithole,’ and they meant ‘shithouse,’ and that made Dick Durbin a liar. Here’s the part of the story that is important: For I-don’t-know-how-many-days, Donald Trump’s behavior — first, speaking crudely and then second, lying about it — put Republican senators in an impossible position, where they had to lie for the president of their party. The key point to my book is I want to move the spotlight from Donald Trump personally. What Donald Trump is, I think everyone can see and everybody knows. The whole American system of government — not just the Constitution, but the party system, the primaries — is built to keep people like this away from political power.

What in your book do you expect to be the biggest surprise to readers? Is it that you see ‘gifts’ unintentionally provided by Trump’s administration for both Democrats and Republicans?

I spent a lot of time thinking of these reasons for optimism. I try to avoid making big predictions — because predictions ask you to think like a spectator. I’m hoping people will think like participants; they’ll take responsibility. There are some possibilities for some really good things to come from the Trump era. One thing that’s very heartening to us in the media is people discovering again the power and importance of truth.

You talk about how ‘norms and rules’ were casually let slip for a period of years. Can we expect that soon there’ll be pent-up desire to return to such norms from a sufficient number of Americans?

What I am trying my best to do is to help Americans see why those rules are so important. This is not just a story about Donald Trump. The book opens by detailing an accelerating crisis in the American political system. I really date the start of it to the end of the Cold War. As long as there was the Cold War, there was always this touchstone for leaders: that they had to put the country’s security first, against an incredibly dangerous, nuclear-armed superpower. When the Cold War ended, I believe a lot of politicians began looking for that enemy at home — and they began playing the political game a lot more ruthlessly. With each presidency, the game got more ruthless.

You’re looking forward to a pendulum swing? You say how democracy has gotten out of favor in the past — I think that may be news to a lot of people.

A lot of us keep in our minds a story of the United States: When the country was founded, it wasn’t a democracy, but then democratic rights expanded and expanded, to all white men, under Jackson. Lincoln freed the slaves. Slaves got civil rights and voting rights. Women were included and there’s just steady improvement. But in fact, it’s a story of crises. I tell the story of what happened in South Carolina: In 1872, the state’s got 700,000 people, 100,000 of them vote. Fifty years later, the state’s got 1.7 million people — and 50,000 of them vote. It’s not just in this country. There are periods where democracy either breaks down altogether, or goes into reverse. •