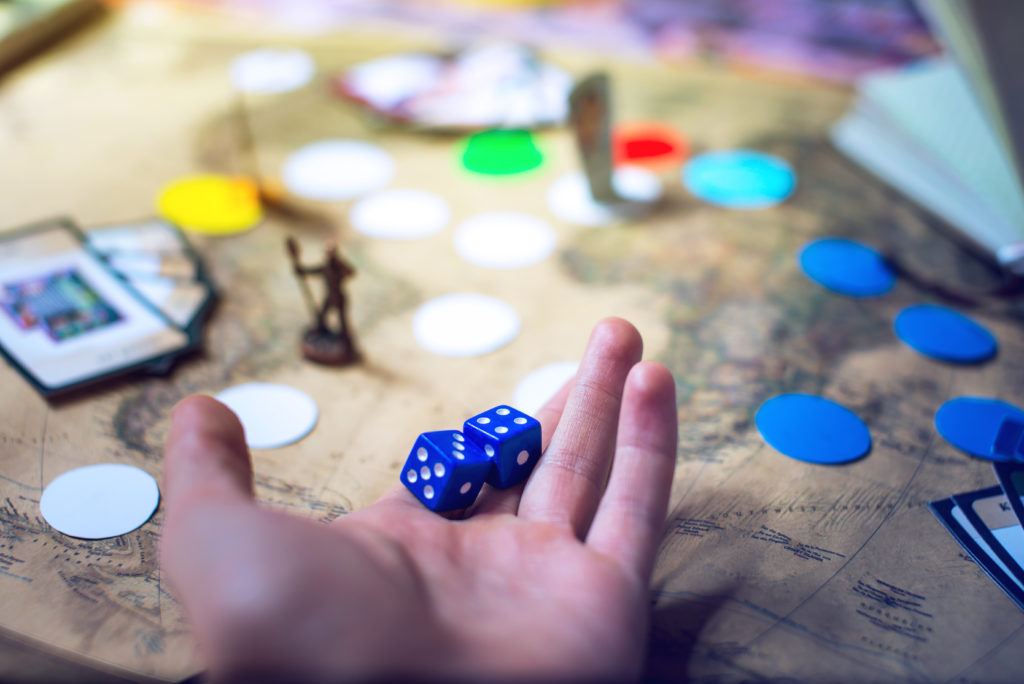 You may have noticed recently quite a few bars in town have board games lying around (Kaiju, Hilltop Tavern, etc.). This resurgence in tabletop gaming hasn’t gone unnoticed, as a number of local groups have stepped in to promote and elevate this unique experience.

“People crave those magical in-person experiences that have intangible qualities — it’s why Skype-ing a loved one doesn’t feel as good as hugging them in person,” said Devon Breithart, cofounder of Games on Tap. She said tabletop gaming gives people a socially acceptable way to be silly and playful. “I think everyone has the drive and potential inside of them to be goofy and joyous — and tabletop gaming has a way of bringing that spirit out in people.”

But there is also more to tabletop gaming than just an excuse to act a fool (which is quite fun) — these games are also more in-depth and experiential. They require people to be creative, competitive and social at the same time, something that usually doesn’t translate in digital gaming, said Colin Moore, co-owner of The Louisville Game Shop.

“We also see a lot of parents and young people looking for some alternative to hours and hours spent playing video games,” Moore said.

With all that in mind, LEO has compiled this list of gaming nights around town. They range from casual gaming nights at your favorite local bar, to tournaments where you can actually win cash prizes. So step away from the computer (after you read this article) and step into the world of tabletop gaming.

Games On Tap
Location: Roaming
Ages: Varies depending on event
On Wednesdays, this roaming board game night invades local bars and breweries so you can “get a beer after work and be involved in a engaging game within 10 minutes — not spend your weeknight poring over a rulebook,” said cofounder Devon Breithart. She said the focus of these Wednesday night sessions are on more “pointy-shouty” games, but that there is always a variety, with over 50 games to choose, from classics (Pit, Telestrations, Set) to modern (The Resistance, Codenames, Klask). If those games sound foreign to you, relax, there are “friendly and patient hosts” who can help you select a game, set it up and explain the rules. But if you are looking for more of a relaxed atmosphere, Games On Tap also has Saturday sessions at rotating coffee shops, where they bring out the “‘heavier’ games that require a little more attention and time,” said Breithart.

Nerd Louisville
Location: Kaiju, Heroes Comic
Ages: Varies depending on event
One of the ways Nerd Louisville tries to make this city the “most awesome nerd city in the universe,” is by sponsoring a variety of recurring game nights at local bars and game shops, events such as Slur Your Role, GameKnights and Friday Night RPGs.

Slur Your Role is a mix of booze and role-playing games, both traditional (Dungeons & Dragons 5E Multiverse) and indie (Monster of the Week, Call of Cthulhu and Dark Places & Demogorgons). Each table is run by a friendly and helpful dungeon master from Nerd Louisville, and tables for the more popular games (read: Dungeons and Dragons) are separated by your role-playing character’s level. This is Nerd Louisville’s flagship RPG night and takes place every other Sunday at Kaiju from 4-8 p.m. To ensure your spot at a table, show up early or register online. There is also a $3 donation at the door, which goes towards Nerd Louisville’s Next-Gen Nerd initiative which “seeks to educate, inspire and empower local youth.”

GameKnights is for Nerd Louisville’s board gaming community. This informal night of board and card gaming is intended to provide a “fun and friendly atmosphere to meet new people and play games.” Expect plenty of variety in games to choose from, since Squire, of Book & Music Exchange (Highlands), provides a choice selection of board games. But feel free to bring your own favorite board game (mine is Candyland… don’t judge). This meetup takes place every Monday at Kaiju from 7-11 p.m.

Friday Night RPGs is similar to Slur Your Role, but takes place at Heroes Comics and Gaming so that all ages can participate, instead of just the drunken grown-ups. Typically, the night consists of four tables running games of Dungeons & Dragons, Call of Cthulhu and a few other popular role-playing games. Friday Night RPGs happens every other Friday night at Heroes Comics from 8-12 p.m.

The Louisville Game Shop
Location: 925 Baxter Ave.
Ages: All ages
Whether you’re looking for that perfect house-party board game, interested in deep diving into the world of miniature war games or just want somewhere to do a little role-play gaming, Louisville Game Shop has you covered. In addition to its exhaustive list of games and accessories for sale, Louisville Game Shop also has a number of game nights.

Board Game Night is open to any and all board game enthusiasts and focuses on board games and non-collectible card games. Players are welcome to use the stores extensive library of demo copies of board games that includes everything from party games to in-depth strategy games to “popular and challenging European games such as Settlers of Catan or Carcassonne.” And as with any good board game night, you can always bring your own. Board Game Nights happens every Tuesday and Thursday at 5 p.m.

Casual Magic Night is night of casual pickup games for fans of Magic: The Gathering. There is no specified format for these events — players can play with commander, modern or standard decks every Tuesday at 4 p.m.

Legend of the Five Rings LCG Meetup is a chance for players of this card game to match up for games, discuss deck building and introduce new players to the game. All experience levels are welcome to this meetup that takes places every Monday at 4 p.m.

If board games or card games aren’t your thing, Louisville Game Shop specializes in miniature gaming with a playing area of “high quality, beautifully detailed miniature terrain for customer’s use in casual pickup games, as well as tournaments.” The shop carries miniature games Warhammer 40,000, Warmachine, Hordes as well as many newer and less well-known miniature games to keep its selection diverse. For those curious about miniature gaming and how to play, join the shop’s Warmachine and Hordes day where players can bring their own sets to play every Sunday at 1 p.m.

BluegrassMagic Gameshop
Location: 5629 Outer Loop
Ages: All ages
When a friend needed a place to store his board games, BluegrassMagic Gameshop owner Brennan Moody offered to let him use his shop. Soon, Moody had over 500 games stored at the shop and decided to make them available for anyone to play. Luckily, the shop had over 5,000 square feet of carpeted play space and seating for 144 to 200 players, perfect for these massive gaming events. “The smiles on faces, the laughter and the camaraderie lets me know people are enjoying themselves, forming new friendships, keeping younger players engaged and honing people skills,” said Moody.

The Chip Bowles Memorial Board Game library, named after the friend who originally started storing his games at the shop, is accessible every second and fourth Saturday during the Louisville Card Board Gamers meet-ups. Gamers can compete for gift card prizes or just for the fun of playing games with fellow gamers. The shop also hosts a number of card game tournaments with cash prizes — with games such as Commander, Pokemon, Yu-Gi-Oh and Magic, The Gathering. To get specific dates and times, visit the shop’s website here.

Through The Decades Gaming
Location: 1951 S. Hurstbourne Parkway
Ages: All ages
Alex Spears, owner of Through The Decades Sports Cards & Gaming (aka TTD Cards), said he likes to think of his shop like a fraternity, a place where like-minded individuals can “get away from the soft warm glow of your computer screen and put you in front of others that want to use the tangibles online gaming can’t provide.”

TTD Cards offers a number of games and products but where the store shines is in its extensive amount of card gaming nights, featuring games such as Pokemon, Yu-Gi-OH, Commander and Magic: The Gathering. Most of the events have a cover charge of $5-$10, all of which goes towards the in store credit prize pool, which is awarded to the top players at the end of each tournament.

All ages are welcome to participate, but Spears sees a special incentive for parents to get their kids involved in these gaming nights. He said, as a kid, gaming taught him the basics of math, reading skills, logic and commerce, but as he grew up, he stuck with it because “the people, the experiences and the friendships that I have made through the years.”