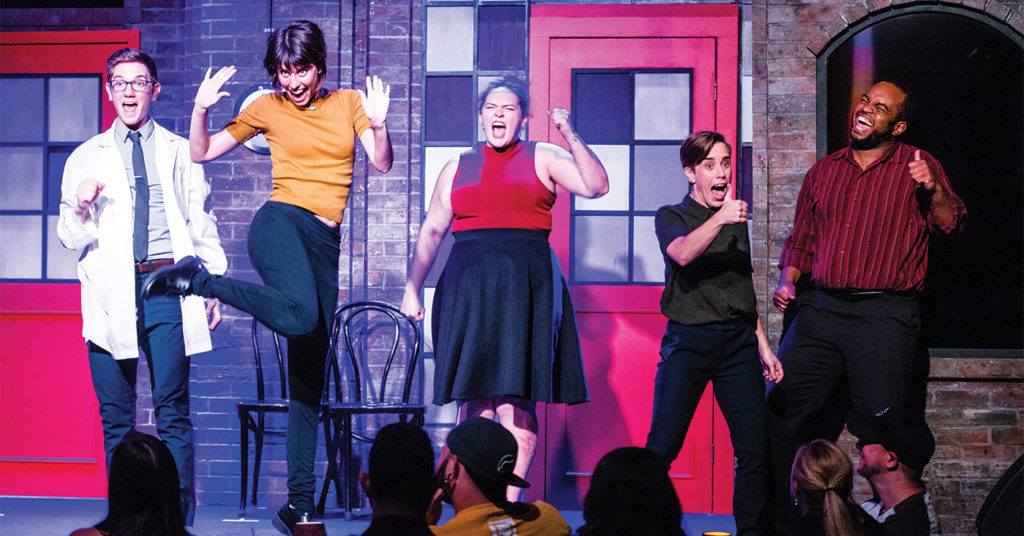 The Second City has been perhaps the most well-respected improv company in the world for nearly six decades. It has launched the careers of seminal performers such as Bill Murray, Dan Aykroyd, Tina Fey, Steve Carrell, Stephen Colbert and dozens more equally-iconic actors and comedians. On Friday night, The Second City’s latest traveling improv show “Cure for the Common Comedy” will be on stage in the Bomhard Theater at The Kentucky Center. Cast member (and Kentucky native) Katie Kershaw took a few minutes to chat with us about improv, The Second City, and “Cure for the Common Comedy.”

LEO: Let’s talk a little about your background here in Kentucky.
Katie Kershaw: I was born and raised in Hazard, which is way down there in the mountains. Then, I went to high school in Lexington. And I went to college at Northern Kentucky University. So I’ve kind of been all over the state, except Louisville. I feel like I really haven’t had a chance to spend enough time in Louisville. I’m really excited to have the opportunity to come back and perform there.

Now that you’re living in Chicago, what’s the most Kentucky thing about you that people notice?
I do say y’all a lot. I pretty much only drink bourbon. I am a UK fan. There is one UK bar here called The Pony. It just feels so much like home. I go there anytime I really need to feel like I’m home, especially during basketball season. But being that I’m from Eastern Kentucky, even most Kentuckians don’t always get me. We’re a whole different breed down there.

Have you always been into improv?
Oh, no. I did not want to do comedy. I was painfully serious. I only wanted to do experimental and performance stuff. And then I did a little bit of improv toward the end of college and realized it was a lot of fun. Theater didn’t have to be all of this torturous dramatic work.

What’s more difficult as a performer: improv comedy or drama?
I don’t know. I think comedy is difficult in a fun way. It’s like its own little math equation we have to figure out every night. I just love that. Being on the road and seeing what an audience in Orlando laughs at compared to an audience in New Haven, Connecticut. We’re living in such crazy political times I think people can be apprehensive to laugh. But I think it’s important for us all to find a laugh anywhere we can.

How do you deal with an off night?
On the rare occasion when we can’t get an audience to react the way we want, that’s when we just have to do the show for one another. We have to make one another laugh and then drink a lot of bourbon afterward. But we’re all such different performers everyone in the audience will connect with at least one of us.

Is it intimidating to perform at The Second City knowing all of the giants who stood there before you?
I feel like the worst comedy student. I was lucky enough to get hired to work here knowing nothing. When I looked around at all the pictures, I was like: ‘All these people worked here? Very cool.’ I did dramatic for so long I had no idea. It’s like ignorance is bliss. If I had known going in about Second City’s legacy it would have been suffocating. And there are still moments walking down the hallway, or I hear Steve Martin is catching a show in the building that night, and it’s like: ‘What? This is my job?’

What sets ‘Cure for the Common Comedy’ apart from other touring shows?
We’re not rehashing bits you have seen in other traveling Second City revue shows. We’re creating some of our own new bits. But we’re also digging deep into The Second City archives and pulling out some really funky and weird stuff to do, as well. It’s a nice mix of new material and some really classic stuff people haven’t seen performed in decades.

What’s the funniest suggestion you’ve ever gotten from an audience member?
There was a show recently where a cast member had to improvise a rap based on a suggestion from the audience. So we asked a young woman if she could hang out with any celebrity, who would it be? Normally, it’s stuff like Beyoncé, Taylor Swift and Ryan Gosling — people in that realm. This girl said, ‘Dame Judi Dench.’ The next thing we know he’s on stage in a full theater rapping about Dame Judi Dench.

Who in the cast gets on your nerves the most when you’re on the road?
[Laughs] Myself! Myself without a doubt. I am with me so much, I drive myself crazy. •