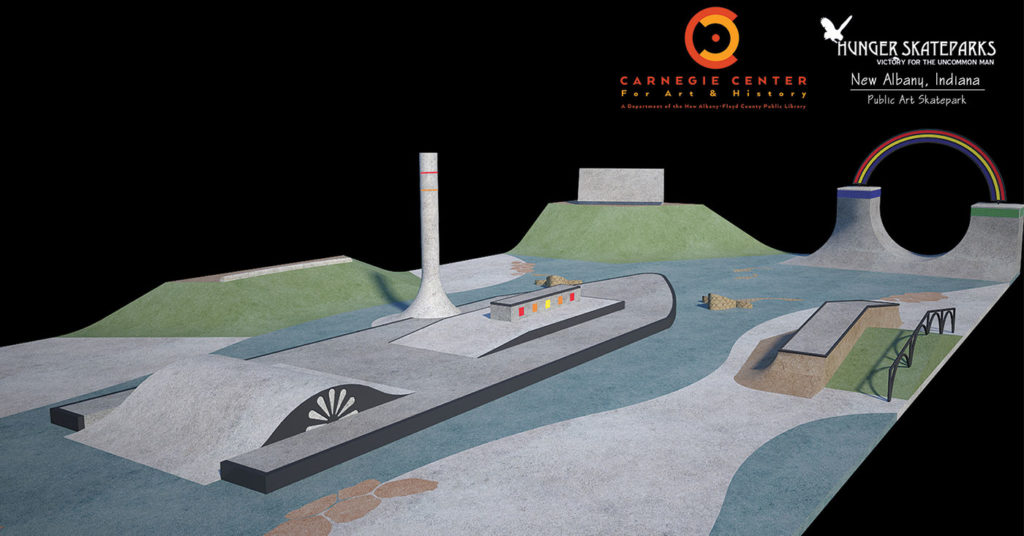 Art, history, community engagement, and cultural legacy are pillars of the Carnegie Center for Art & History, and they are also the key aspects driving the Carnegie Center’s most ambitious public art project to date, the New Albany Flow Park.

This multi-year project aims to rehabilitate one of the area’s oldest public skateparks and turn it into the region’s first ever skate-able work of public art. Think of it as one, big, concrete plaza that invites people to run, climb, play and roll through its spaces.

Tucked in between the Amphitheater and the Sherman Minton Bridge on New Albany’s Riverfront, this park will provide plenty of features that will get skaters of any experience level excited, with plenty of banks, rails, hubbas and multi-bump forms. This park predates Louisville’s David Armstrong Extreme Park and holds a lot of history with locals, so we’ve also been conscious to leave some of what makes the park so special to begin with, like the iconic pyramid on the eastern edge of the park.

In March of 2015, I became curator at the Carnegie Center, and our director, Sally Newkirk, challenged me to reimagine our Public Art Project and how it could provide new art experiences. The Public Art Project was established in 2010 and has helped facilitate the creation of over two-dozen works of public art since its inception. We began looking for new opportunities that would encourage physical engagement and participation in the creation of the art.

Shortly thereafter, I found myself walking around the New Albany Riverfront and came across the well-worn and tired skatepark — and a light bulb went off. Here was a blank canvas that was dying for some love, for some attention and care. Knowing from firsthand experience how much creativity, persistence and drive goes into both skateboarding and art, I was struck with the obvious connection between the two and how we could use one to help the other.

Skateboarding’s history and culture has always been deeply intertwined with art and ingenuity. The act of skateboarding itself is a living embodiment of art and sport, of creativity and physical activity.  Skateboarding, BMX riding, inline or quad skating, scooters, parkour… these are all ways the New Albany Flow Park will inspire minds to explore real world geometry, to stimulate brain activity, and to help build a deeper understanding of the physical world around us. Using the skatepark as the foundation, we are applying artistic practices to promote physical, mental and emotional health in our community.

Since we first announced our goal to renovate the park, we have been inundated with calls and emails offering support and encouragement. Stories came gushing in from people telling us how much the park has meant to them, how they grew up skating it and how excited they were to hear about its new life. The beauty of this project is how involved members of our community have been in the process of forging a cultural feature in downtown New Albany. This involvement helps create emotional investment and a sense of ownership to the park and to the community as a whole. Ten years from now, a 30-something will be able to walk along the Riverfront with their kids and say, “I was there when we made that,” “I helped to come up with the idea for that feature,” or, “I helped build that form!”

We’ve contracted with Hunger Skateparks from Bloomington, Indiana to help make this dream come true and met with local stakeholders of all ages seeking input into what they would like to see in the park. We received numerous submissions from visitors and emails to the museum, and from our “Skate and Create” public brainstorming session at the skatepark, where participants drew out their ideas on paper and with chalk directly on the concrete and built miniature clay models.

The Carnegie Center and Hunger Skatepark staffs pored through the submissions, looking for unique features and reoccurring themes, and from there Hunger designed one, cohesive, flowing park based off the ideas from the public. Given the park’s location along the banks of the Ohio, many of the submissions had the river as a main source of inspiration, so it plays a prominent role in the design flowing through the middle of its footprint. Hunger was also able to incorporate many features derived from the public submissions that reference river creatures, bridges and even New Albany’s steamboat history. Being able to add layers of meaning like that creates something beyond just a concrete playground, but adds to the depth and complexity of the park.

With the renderings now complete, we are currently in the process of getting all the necessary permissions and permits for construction. The Carnegie Center expects to cover the expenses of this project through a combination of our own funds, donations, grants and in-kind support. There is still a long way to go, but with a little luck and a lot of work, our goal is to break ground next year so we can begin making a significant contribution to the health and culture of Louisville and Southern Indiana, and help put this region on the map like never before.

With the support of our community, we can lift art and action to new heights with the New Albany Flow Park. •

Daniel Pfalzgraf is curator of the Carnegie Center for Art & History