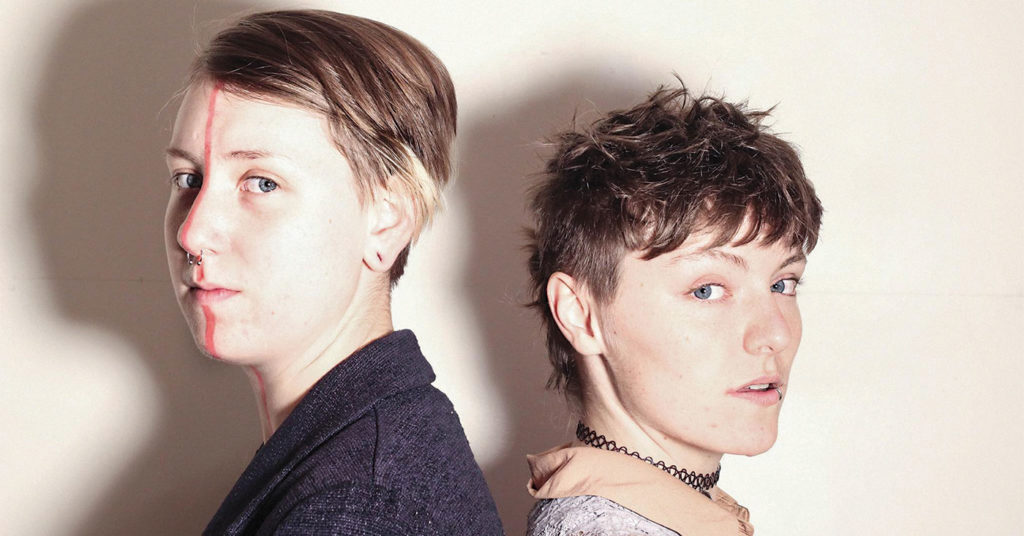 Self-identifying as a “gay-ass duo,” GRLwood, a guitar-and-drums garage-rock band, is as unflinching as you’d imagine. At a recent show in Cincinnati, the pair were confronted with a battery of ugliness, starting with a male crowd member repeatedly trying to grope a female attendee, and ending with an angry neo Nazi shouting bigoted epithets. GRLwood is fronted by Rej Forester, who took matters into her own hands when she realized that the woman in the crowd continued to receive the unwanted attention. Forester invited the crowd to stand behind her if they felt uncomfortable, looking for a way to give everyone in attendance the opportunity for a good time.

“If you ever come to see GRLwood play, and they make you feel uncomfortable, I will deal with it,” said Forester, who started GRLwood as a solo project, before the band recently became a two-piece, releasing an EP, 2 Fags Demo, together. “That shit is unacceptable. I remember the guy when it was happening: The guy kept saying, ‘I haven’t done anything wrong.’ For real, this dude has probably done shit like this his entire life. He probably really genuinely thought he did nothing wrong. Maybe 10 years ago, that kind of thing would happen, but you would just write it off.”

It only escalated from there, with that man leaving and a self-identified neo Nazi showing up and making homophobic comments thereafter, when the band was loading up their equipment. It went as well as you can imagine, with a flicked cigarette inciting the neo Nazi to throw punches, landing one on a bartender, before being removed.

For Forester, it’s part and parcel with the new sociopolitical climate. While Forester is prepared to stand up for the people around her, she isn’t inherently violent, looking at music as a positive, community-building experience that she can help share in. But she doesn’t shy away from the language of struggle either.

“There was a girl saying, ‘This is so terrible. This is what he wanted,’” Forester said. “And what’s wrong with him giving him what he wants? I get the whole pacifist, peaceful ideology. There’s a big difference between ideology and reality. People like that, I don’t want to say that not all violence is bad, but it is a way of communicating.”

Picking up her first guitar at the age of 10, Forester has used music as a vehicle to explore the world around her. She spent time on the road as a hitchhiker and busking, landing in Guatemala for a brief time. It was there that Forester met Iza Noren, a Swedish immigrant who initially lived next door, before the two became partners. They spent time together traveling, forming the folk band Ink Elk along the way.

“I pretty much lived as a homeless hobo on the street in 22 different countries, just hitchhiking, living out of a tent,” Forester said about busking around the globe from 2011 to 2015. “Had my dog. Had my guitar. It really carved the person I am. How can I separate from me right now? There is not too much left over from before that.”

After moving back to Louisville, her hometown, and eventually separating from Noren, Forester explored parts of her musical interests that were previously untapped.

“I came back to Louisville in 2015,” Forester said. “We split up in October 2016. It was probably January 2017, that following winter, where I was able to explore musical parts of myself that I had been holding myself back from developing. In screaming, or high-pitched operatic. My partner was quiet, and she saw that as me standing over her, and guitar as well. When she left, I just exploded. It was folky, kinda pretty, Tom Waits-ish material. I finally started getting comfortable writing music that she wasn’t into. I wrote a lot of things in power chords. My life is power chords.”

At first, Forester was content playing solo, with just a guitar and a suitcase drum, a one-person band full of bristling punk fury. After furtive practices with Twenty First Century Fox drummer Greg Ward, Forester met Karen Ledford, who took over as drummer.

“I was playing something a little heavier than the traditional folk pop, and I was feeling a little empty,” she said. “I played and she was like, ‘you’re awesome.’ I was walking around with her, and she was like, ‘by the way, I play drums.’ And I was like, ‘what? It’s on!’ Let’s go rehearse somewhere. Sometimes people just don’t vibe together. But we jammed together and we went really well together.”

“It was really great,” Forester added. “I was extremely excited. Dude, I feel like I manifested her. No knock on Greg, but I really wanted to play with another femme musician. I was afraid at first, but when I told him about Karen, he was like, ‘I’m really happy for you.’”

The pair recorded and released the 2 Fags Demo — angry and punk-inflected rock with a mighty pop hook.

“I love Karen a lot, since she’s the integration of a friend and musician, and a total light in my life,” Forester said. “I love that she has dedicated so much time to GRLwood. I’m not super open and trusting. I wasn’t expecting anything. I was open to it, but we’ll see. This is real and really exciting.” •

GRLwood also will play at Kaiju on Wednesday, Nov. 15 and Friday, Nov. 17.