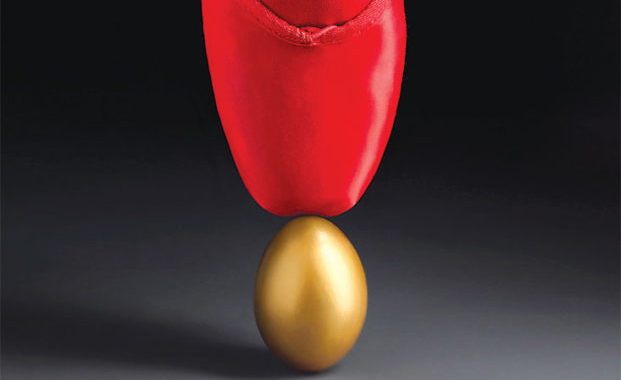 A ballet pointe shoe resting atop an egg. How simple — and how odd. The two do not normally go together. And yet that vision by the late designer Julius Friedman became an iconic poster of international renown.

“Toe on Egg,” as it became known, was created in 1980. Because of it and “Fresh Paint,” another poster with eggs that has become well-known, Friedman started describing himself as “the egg man.”

In the book “Julius Friedman: Images & Ideas,” designer Leslie Friesen wrote that Friedman used “the combination of incongruous elements to create an unexpected, attention-grabbing image … The results are memorable, etching themselves in your mind.”

But even icons can be revisited, much like revivals on Broadway.

The advertising agency Mightily was hired by the Louisville Ballet in May to promote its 2017-18 season, which opens in November with “Stravinsky!” The program consists of “Rubies,” a Stravinsky/Balanchine collaboration, and the world-premiere of a contemporary version of “Firebird.”

An idea was bounced around to create a new “Toe on Egg” poster to commemorate the Ballet’s debut of “Stravinsky!” 50 years ago. That concept, proposed by Mightily President Pip Pullen, expanded to include a golden egg (there’s a gold egg in “Firebird,” plus items made of gold are traditional 50th anniversary gifts) and a change from the original pink pointe shoe to a red one for “Rubies.”

The goal was to “elevate [the Louisville Ballet’s] value, to strike a chord with people,” said Pullen, hoping a new take on Friedman’s poster would do just that.

Pullen contacted Friedman, stressing to him that “I need your blessing” before any changes would be made. Friedman told him he was “all aboard for anything that benefits the Ballet.” They had “eight or nine exchanges about the poster” before Friedman died of leukemia on July 16. Friedman did not get to see the finished poster.

The poster, produced by a team that includes Athens Paper, Clark & Riggs Printing and Dean Lavenson Photography, was released recently. Pullen said it has become a homage to Friedman and is not for sale. According to Perez, the Louisville Ballet will give away 250 posters at its November gala, with an online lottery to distribute the remainder.

The Louisville Ballet is also honoring Friedman by dedicating “Stravinsky!” to him. “In some way or another Julius’ work has touched all of us,” said Louisville Ballet’s Artistic and Executive Director Robert Curran, “and here at Louisville Ballet he has had a profound and lasting impact. Whether it has been through his iconic imagery, through his constant advocacy, or his innovative projects with our dancers, he has been a welcome and highly valued presence. We keenly feel the hole his passing has left in our company.”