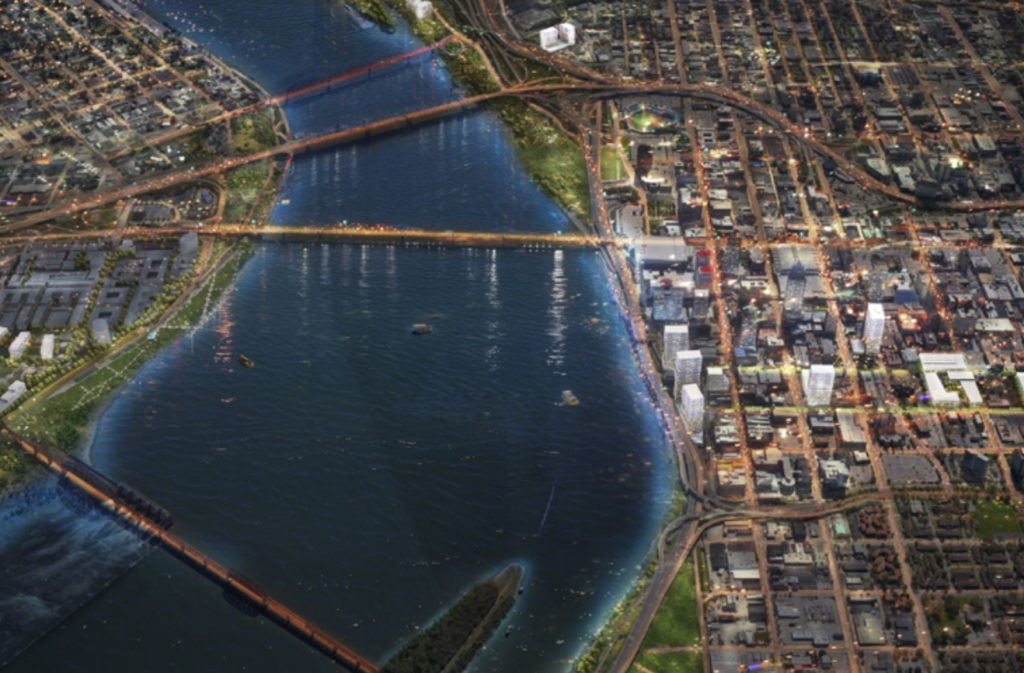 From the Amazon proposal: possible locations for the new headquarters on both sides of the river.

We knew it would not be long before the local application for Amazon’s second headquarters was leaked, and it so happens that LEO got a peek at it — first.

The bid detailed on a six-part website, a collaboration of government and business leaders in Louisville, Kentucky and Southern Indiana, touts the region’s obvious, best selling point — location, location, location. It also employs expected hyperbole — “unprecedented collaboration with university and public administration partnerships, as well as strong incentives and easy transit.” Ha! “Easy transit …” And then there is the boast of “a quality of life second to none for every Amazonian.”

In what seemed like defeatist, meta, self-reflection, the introduction says picking Louisville involves “swinging for the fences” because we “may not be the obvious choice for Amazon, but we are the bold choice.” The phrasing and, as it turns out, much of the intro video, parrots Amazon CEO Jeff Bezos’ annual shareholder letter. Using his words is smart, perhaps, but once he gets the joke, will Bezos be willing to risk a $5 billion mistake… er, investment by coming here?

Among the inducements in the proposal:

— “Kentucky and its local partners propose an incentive package totaling $2.5 billion over the next 20 years.” Give it all away, why don’t you?

— “ … we are excited to present Camp Alexa at Butler State Park for your employee retreat …” It seems we would give Amazon this 800-acre park in Carrollton, Kentucky. “Camp Alexa can be home for programmers needing seclusion to focus on developing new products, new employees being oriented to the company, support staff who don’t want an urban commute, or a simple breath of fresh air for any of your 50,000 HQ2 staff.”

— and “prime downtown real estate.” Of the proposal’s five plans, the first mentioned is an “urban” campus, with reuse of existing buildings downtown and new construction. “This site will span the Ohio River shoreline on both the Louisville, Kentucky and Clarksville, Indiana sides ..” Then there are four “suburban” plans: at River Ridge Commerce Center in Indiana; and on “greenfield” land in Shepherdsville, Oldham Reserve in LaGrange and Oxmoor Farm in Louisville.

The bid also includes a short reverie about “a day in the life” of “Samantha,” “a 26-year-old software development manager at Amazon HQ2 in Louisville. She lives close to the urban campus in a new net zero energy community, which helps offset the cost of her rent. Samantha participates in an electric car share to get around the city when she’s not riding her bike.” Oh, and on “weekends, Samantha likes to meet up with friends in NuLu to poke around the local shops and enjoy the diverse culinary scene.”

How comfortably clichéd, not bold.

Certainly, in the coming days and weeks, arguments will be had about the proposal’s content. We thought it would be instructive to take a critical look at how the proposal was presented — Did Louisville use its millisecond elevator pitch effectively, or has the door shut on us before we had a chance? So we asked someone from a local advertising agency for their thoughts (he asked to remain anonymous):

LEO: What grade do you give the proposal and why? Base this on composition and content.
Look, most people in the business world think RFP responses are about the caliber of the content — ‘Content is king’ and all that kind of thing… and at some point that becomes true — but plenty of RFPs are won just as much on the quality of their appearance and how well they’re put together as they are on the actual material inside them.

To be honest, I only read about 10 percent of the response — like most people, I spent most my time watching the videos, looking at the charts, and generally assessing everything from 50,000 feet — but I have to tell you, when it came to appearance and tone, this document was an assault to the senses.

The video at the beginning — with the obviously-fake mural of the logo on the stadium wall at the end — was tough to sit through, and it set the mood for the rest of the response. That a city that claims to be bold would put something this cheesy and lacking in personality together should tell Amazon everything it needs to know about how ‘courageous’ and ‘bold’ we are.

And the content? Albeit just from a technical perspective, the content looked as if it was just dumped in — it was littered with double spaces and spelling errors (‘Worlds Best Food City’ … seriously?); it contained low-res art; there was no favicon; it had images where it should have had HTML; and overall, from the formatting to the coding, it was characterized by inconsistency, carelessness and what felt like a contempt for the reader’s eyes — I just didn’t want to look at it or have an experience with it.

So based on a scale of one to 10? I’d rate it somewhere between Tragic and Cringe-Worthy.

What are the three most persuasive items?
I thought the actual written content was intelligent: Some people had definitely spent a lot of time thinking about and putting it together. I liked how it was real-estate heavy, and I think that part of the pitch was genuinely compelling. If we’re talking content alone (and not whether anyone would ever want to read it), I think it was very solid.

The ‘Quality of Life’ video was perhaps the best of all of the videos. I also liked the Real Estate and Transportation video — it wasn’t an imaginative or creative piece and the voice-over sounded like they’d found some sorry GLI apparatchik to read the script, but it got after one of the foremost needs Amazon’s going to have: building and land availability.

Last, I liked that U.S. Sen. Mitch McConnell addressed his letter to Gov. Matt Bevin rather than Jeff Bezos. Sticking our finger in Bezos’s eye is definitely a bold move. Not smart, but bold.

What’s the most confusing or detrimental item?
Look, it’s clear that nobody put enough thought into the design or the development of this web page. When you’re Amazon you’d have to expect a partner that has at least some basic appreciation of digital communication… let alone standards of execution. This page is so badly handled from a presentation viewpoint, root to branch, it’s difficult not to condemn the whole effort. Honestly, it’s just a really bad way to present us as a cool place to be.

Seriously, do you think it gives us a chance of attracting Amazon?
No. As I just said, if you’re pitching Amazon you’d better know how to communicate in a digital environment. I don’t know if this was produced internally, if there was too little time, or if they used a firm that wasn’t strong in terms of storytelling or development, but this effort hamstrung the otherwise-thoughtful approach. •