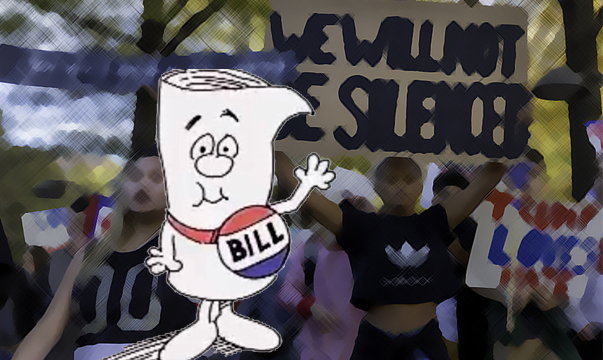 Kentucky is the new legislative laboratory for a bigoted, extremism agenda.

Take the latest proposed law. Is it to protect our First Amendment right to protest? No, it would protect drivers who run over protesters with their cars.

This is not hyperbole — this is Kentucky.

On Tuesday — the same day two Republican U.S. senators were pleading for conservatives to push back against the nationalist, unconservative, temperamentally handicapped, Trump-Bevin faction in their party — a Kentucky state lawmaker introduced a bill targeting rights of protestors, and protecting drivers who hit protestors with their cars.

State Rep. — and stain on Kentucky’s pants — Wesley Morgan, prefiled BR 305, “An act related to public protests.” If passed, the law would prohibit protesters from “wearing a mask, hood, helmet, or other facade that hides, conceals, or covers any portion of his or her face.” Protesters will also not be allowed to wear “protective gear, including shields and armor.”

Also, if you are protesting, or even in the vicinity of a protest, and you are carrying a gun — a “deadly weapon” — that is a Class A misdemeanor under this proposal.

I find it hard to believe that this extreme, xenophobic faction of the Republican Party is actually willing to sacrifice Second Amendment rights… even if it’s for advancing racial and social injustice. But, I guess we’ll just see what they hate more.

The bill also would protect drivers who hit protesters who are protesting “in an area not specifically designated for demonstrating.” Drivers would not be held liable for running over “a person who is obstructing or interfering with the regular flow of traffic.”

In other words, the flow of traffic is more important than a person’s life.

I forgot in which chapter of the Bible, God told Moses: “Fiats have the right-of-way in all Exoduses.”

The truth is, masked protesters have not been an issue in Morgan’s hometown of Madison, Kentucky. As far as I can tell, neither has traffic been unduly disrupted by protests, or drivers being found guilty of inadvertently harming or killing protesters with their cars.

In fact, the only places someone from Madison has been able to witness such occurrences is on Fox News and Breitbart.

What is also a fact is that Wes Morgan is stoking the political flames of his voters with fear, xenophobia and anger — the same anger that is driving U.S. Sens. Jeff Flake of Arizona and Bob Corker of Tennessee, two true conservatives, away from the Republican Party.

So when: An anti-white supremacist protester gets killed by a deranged, American Nazi in Charlottesville, Virginia, that is when a bill is proposed in Kentucky to protect the Nazi behind the steering wheel.

And when: A group of anti fascists — that’s what antifa stands for… anti fascists — counter protest neo-Nazis, and pictures of masked, hooded protestors spread across the internet, that is when a bill is proposed in Kentucky to regulate how people can protest.

A quick refresh of the First Amendment of the U.S. Constitution: “Congress shall make no law… [abridging] the right of the people peaceably to assemble.”

The irony of Morgan’s mindless bill is that the NRA would actually argue it violates people Second Amendment right to bear arms. See, the aforementioned provision banning masks, continues to include, “[possession of] any deadly weapon or dangerous instrument.”

Welcome to the new new Trump-Bevin Republican Party. They’re not here to solve issues, they’re here to fix what makes their voters angry. And too often that anger is nothing more than what’s different.

The previous generation of the Republican Party was misguided, but it had a real agenda. It used emotional, social issues to win elections, but ultimately that was a means to pursue an agenda. The Republican Party used to argue that their ideological beacon was rooted in principles.

Not this the new, Trump-Bevin Republican Party. It has stopped pretending its governing motives are conservative, constitutional, economic, patriotic, moral or even Christian.

Now, the Trump-Bevin Republican Party is not about solving issues. The only problems it is interested in solving are simply those things their base doesn’t like.

Cultural purity, where if you don’t conform to the type protesting we allow, someone can accidentally hit you with their car.

Republicans everywhere need to listen to the message of U.S. Sen. Flake: “Populism is not a governing philosophy.” Republicans need to stand up to their colleagues, like Wesley Morgan.

Trump, Bevin and Morgan need to solve real problems. Cultural purity is not a governing philosophy.