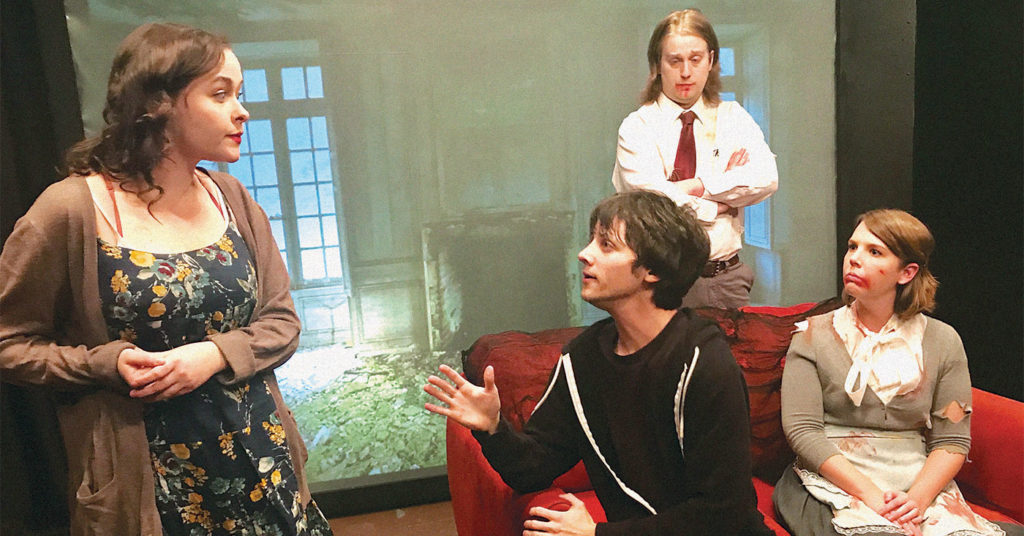 There was a fair amount of consternation and regret when Actors Theatre of Louisville announced earlier this year that it was discontinuing its National Ten-Minute Play Contest. It had been a fixture of the season since 1989, and the company’s history of systematically supporting short plays dates back years before that.

Still, ATL’s rationale made sense. Back then, the company was a pioneering driver of the rise of 10-minute plays. These days, the 10-minute play is ubiquitous, and the company’s announcement promised that it would redirect its energies into new, creative initiatives.

In the meantime, if you’re looking for evidence that the 10-minute play is a vibrant, exciting genre, check out this year’s “Ten-Tucky Festival of Ten-Minute Plays” at The Bard’s Town Theatre.

I can’t count how many of these short-play festivals I’ve seen over the years, but I don’t recall ever seeing a collection of such uniformly high-quality ones. All the plays feature ingenious premises and finely-crafted dialogue. And though each piece is laugh-out-loud funny, each piece is also thoughtful and witty. And across the board, the plays get the fresh, energetic performances they richly deserve.

There are eight plays in this year’s lineup. Here’s a rundown in order of performance.

The first three plays are clever twists on the classic romantic comedy.

In Gary Wadley’s “Different Parts” directed by Sabrina Spalding, Kathy (Tessa McShane) has a history of boyfriend problems because her parents (Ryan Watson and Meghan Logue) are, in a word, unconventional. Dad has some awkward anatomical anomalies (and runs a mortuary that serves more than one purpose). And though both parents dote on their daughter, when a suitor (Jeff Cameron) comes for a visit, things go disastrously awry. Happily, though, the new boyfriend has more up his sleeve than does Kathy’s dad.

“Seventeen,” by Teri Foltz, and directed by Donald Mahoney, is a cunning piece about a young man (Alex Haydon) who revels in his hip, poetic gloom — and plunges into an existential crisis when a coffee shop customer casually remarks that he looks “happy.” His foil, (Amy Davis), seems to have a sunny disposition, but, in the course of unraveling all that angst, she lays out a fine trap of her own.

“Murder in the Night,” by Courtney Groszhans, and directed by Corey Music, is a madcap caper about a burglar (Ryan Watson) who breaks into the apartment of a celebrity-obsessed girl (Megan Logue), who immediately starts calculating how she can leverage the burglary — or even her own murder — into posthumous TV fame.

Jacob Cooper’s “An Invasive Procedure,” directed by Katye Helm, is riotously-funny sendup of so-called “conversion therapy,” featuring Tony Smith as an over-the-top doctor, Cameron Murphy as a hapless gay man looking for a “cure” and Rachel Allen as the nurse whose lascivious clothing is part of the doctor’s recommended prescription.

In “Squirrels in a Knothole,” by Peter Stavros and directed by Nick Hulstine, three squirrels occupy a tree with a view of a corporate office building. These squirrels spend their days watching cubicle workers who are watching them. The squirrels, it turns out, have some keen observations about those barren office workers. They even know about impending layoffs. And, when a predatory hawk darkens their day, it turns out they also know about seniority.

Jake Beamer directs Jennifer Donlon’s sharp-edged “Faux News” (the x is not silent). Here, Tyson McJames is hosting a special holiday broadcast from the “Island of Misfit Toys.” These days, the misfits include a rough, scruffy woman drinking something out a paper bag (Sabrina Spalding), a gun-toting Second Amendment doll (Lee Stein), a glam-flamboyant Ken doll (Will Heuser) and a Feminist Barbie (Tessa McShane), who will not tolerate any mansplaining (or man-anything) whatsoever.

In Ashley Fletcher’s “Gratitude Attitude,” directed by Gracie Taylor, we meet parents (Janice Walter and Ken Townsend), who make a regular ritual out of mourning the death of their daughter (Ashley Anderson). The problem in this play — which is as provocative as it is funny — is that Ashley is not dead.

“The Yam Dynasty,” by Abby Schroering and directed by Ryan Watson, features Sabrina Spalding as Clara, owner of the largest purveyor of sweet potatoes in the country and Corey Music as her trusted executive and advisor. Clara, it seems has no love of sweet potatoes and dreams of buying a vineyard — and though the smart banter yields plenty of laughs, the play has plenty to say at what stands between us and our aspirations.