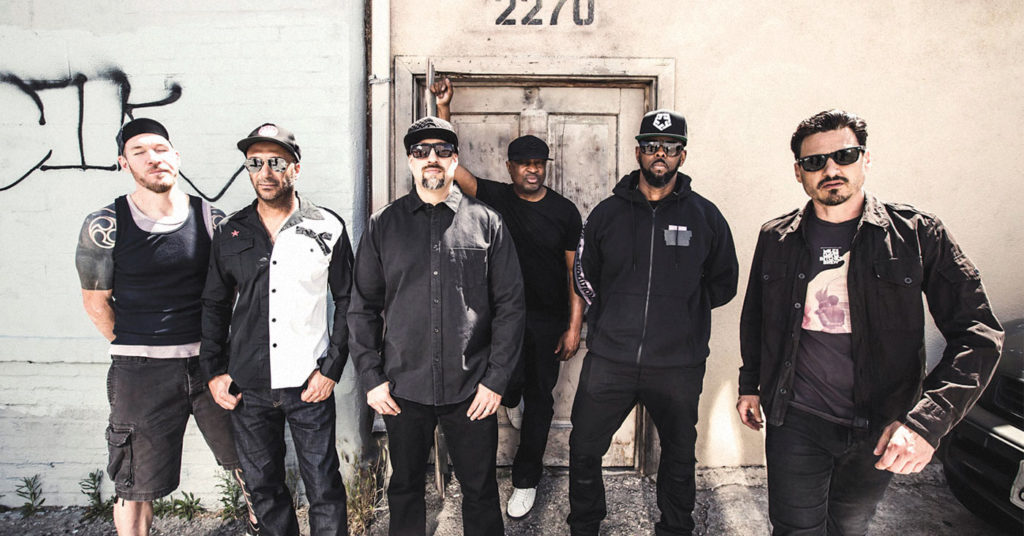 Rage Against the Machine served for many as a gateway to the subversive, from politics to protest and the music that fuels that fire in between. Post Rage, bassist Tim Commerford, guitarist Tom Morello and drummer Brad Wilke backed the gone, but never forgotten, Chris Cornell in the since defunct super group Audioslave. Now, Commerford and company have picked up the pieces to form Prophets of Rage, this time fronted by Public Enemy’s Chuck D, and Cypress Hill emcee B Real. Their first show, a protest at the Republican National Convention against Donald Trump, served as a primer for the band’s unflinching politics.

LEO: Was Rage your first band? Tell us your origin story in brief.
Tim Commerford: Pretty much. I was in other bands through high school, and played a few shows here and there, but spent most of my time with my bass as catharsis through life. I learned to play bass by myself. I never really practiced stage moves, I just practiced bass. I’ve known Zach de la Rocha since elementary school and we hit it off. For me, I went from learning Sex Pistols and Rush songs to rocking on a big stage in front of a lot of people. It was like that.

What do you hope people take away from the music as a message?
At the end of the day, it’s about having a voice and speaking up. I keep telling my sons that when you hear someone say something sexist, or racist, to speak up. I’m always going to use music for a point of view, whether you like it or not.

What advice would you give to anyone out confronting the world’s ugliness right now?
That’s a tough one. I’m an extreme human. I like to put myself in situations that are dangerous, whether in sports or politics or music. For me, that’s what life is all about. That risk is where it’s at. I don’t think that looking for a safe way out is the way out. A lot of amazing things have happened in the world because people got pissed and took it to the streets.

You’re talking to someone right now, it’s sad, but when I see protests, and nothing violent happens, I’m a little bummed. I want people to be violent. I don’t want white supremacists and getting run over, but I do want people protesting white supremacists to come with bats. That’s what I want. That’s the kind of protesting that makes things change.

What do you say to people who tell musicians to keep their mouths shut about politics?
It’s makes it a lot more challenging to have a point of view, especially in a country like America today, where half the country feels one way and half the country feels another. I can’t imagine playing music that doesn’t have something to say. That’s a priority on my list and always has been. If somebody has a problem with that then I don’t know what to say to them — eat it.

What kinds of things do you hear from your hate mail?
I really feel that a lot of the hate we’ve been getting has been directed at us because people think that we’re anti-Trump. There’s a lot of people that are angry at us because they feel like we should be anti-Hillary as well. I see a lot of, just, racist hatred. It’s hatred for the point of view that we have and hatred for the ethnicity that’s in the band. Then, there’s those who just love Rage Against the Machine and they hate anything that’s not Rage Against the Machine.

It’s easy to go check out the message board for any one of our videos.
‘Bring Back Zach,’ ‘What about White Lives Matter,’ ‘You guys are libtards,’ shit like that.  I actually get a kick out of the hatred. The hatred fuels me. So when I hear how these people say these racist, sexist, fucking horrible comments, it just fuels me to want to do it more. As far as I’m concerned, bring it! You know you’re doing something right when people hate you.