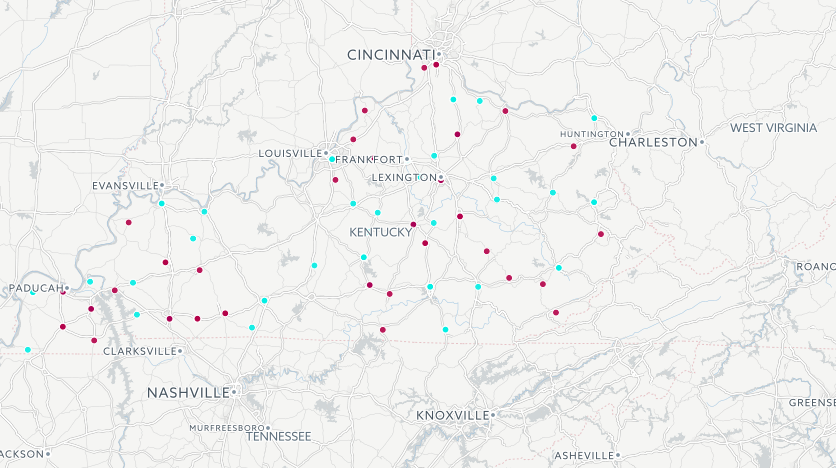 The deadly, white nationalist clash in Charlottesville reignited a national conversation about confederate monuments and who and what gets memorialized, a particularly thorny subject in the South.

But beyond statues and monuments, what about the tributes to historical figures we interact with everyday — in parks we play in, schools we attend, streets we drive on?

That’s a question that led one historian to examine who gets memorialized in street names across the South, comparing Confederate figures with leaders from the civil rights movement.

Kentucky has at least 43 streets named for Confederate figures and at least 80 named for civil rights leaders, according to Caroline Klibanoff, a public historian and graduate student at Northeastern University. That’s an uncommon ratio across the rest of the southeast, where the two groups get about equal billing.

Map created by cklibanoff in CARTO

Full disclosure: Klibanoff is my older sister. Her work on this subject, which dates back to earlier this year, has been picked up by several news outlets in recent weeks.

Klibanoff is assembling a Digital Atlas of Southern Memory, a time-lapse account of who and what gets memorialized in the South. Her street name map, which uses 2014 U.S. Census data, is the first phase of that project.

“The interesting thing about looking at street names is it’s such an everyday object,” said Klibanoff. “We all encounter them, we all use them, and at the same time, they take on these names, so they articulate something that we’re choosing as a society to remember.”

While Klibanoff originally focused on states that were in the Confederacy, we asked her to take a look at Kentucky.

Perhaps it shouldn’t come as a surprise that Kentucky isn’t covered in Confederate street names — the Commonwealth did fight for the Union, after all. But as we’ve seen in recent weeks, there is plenty of Confederate history in Kentucky.

In Louisville, the statue of John C. Castleman in Cherokee Triangle recently prompted protests and acts of civil disobedience. Lexington Mayor Jim Gray has called for the Confederate statues at the Fayette County Courthouse to be removed.

There’s still plenty of support for the losing side (which Kentucky didn’t even formally support). When the University of Louisville decided to get rid of an obelisk that honored Confederate soldiers, the town of Brandenburg volunteered to take it off their hands.

And support goes beyond Brandenburg. Klibanoff found that Kentucky has the fourth most streets named after Dixie — an affectionate name for the Confederate South — in the country.

The only states with more Dixie-named streets are Florida, Georgia and North Carolina. Those three states are much larger and much more, well, Southern.

Klibanoff says the recent attention on Southern memory and history means Kentucky may once again have to face the same question it faced before the Civil War.

“As we grapple with these questions, Kentucky will have to sort this out in conjunction with its statewide identity,” she said. “Is it a Southern state? Is it a Midwestern state? Is it even a Northern state? What do our monuments and public spaces and our streets say about who we are?”

Kentucky’s street names demonstrate a respect for the civil rights movement and the Confederate South, reflecting a tension that the state has long struggled with.•