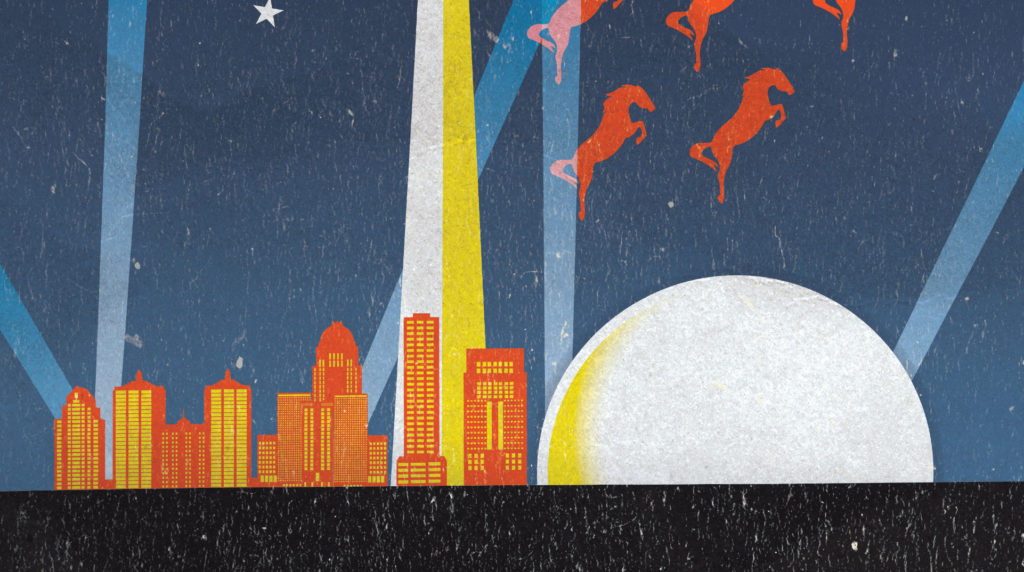 Louisville and its surrounding counties have a goo d number of artists and art lovers. A biennial or fair made up of local art would continue with the “Louisville Loves Local” theme. Or even expand it to artists from around the world.

But is it possible?

That’s the question I asked people involved in the local visual arts. Specifically, do we have the interest, the organizational skills, the buyers and the location? Should it be every year, biannual or even once every five years? Would it include only visual art, or would it include, as do other cities’ biennials, performing art, architecture… and more?

I know people in the art community have discussed this, because I’ve been in on the conversations.

The answers: Yes, no and many varieties of maybe.

I like asking questions — a friend once referred to it as “peeling the onion.” “What do you think about Louisville having an art fair?” is a guaranteed conversation starter at any art gathering. While I know there is a want, I’m not sure there is a need. As a result, I see this discussion as an intellectual exercise. I never asked local graphic art legend Julius Friedman, but his recent passing makes me want to know what he would have thought of the idea.

I received some responses that screamed yes.

Daniel Pfalzgraf, the curator at the Carnegie Center for Art and History in New Albany, has spent many hours thinking about a local art fair.  “One major goal that I have in my professional life is to help expand the Louisville art market beyond the metro area. A big part of the equation to make that expansion happen is to develop a major art fair here in Louisville.” He thinks Louisville’s proximity to many cities is valuable. “That is a large population that could easily make it here for a weekend stay.”

To narrow the focus of the responses, let’s work backward, starting with those who are against it.

“I think it’s already happening, so I don’t see the need for it, honestly,” Mo McKnight Howe, owner of Revelry Boutique Gallery. “Between Made Market, the Fleur de Flea and the Flea Off Market, there are plenty of outlets for local artists to sell their work directly to the public.”

Miranda Lash, the Speed Art Museum’s curator of contemporary art, prefers another type of exposure. “I think the best thing the Louisville art scene could foster is more artist-run spaces where artists are able to regularly exhibit their work and present their latest projects. Zephyr Gallery here in Louisville has a commendable focus on exhibiting artists from the region.”

21c Museum Director Alice Gray Stites said Louisville is becoming recognized internationally as a city known for the arts. “However, even the sum total of the contributions made to Louisville’s vibrant arts ecology does not necessarily add up to creating a commercial market strong enough to sustain an art fair,” she said. “While I am skeptical about the potential success of a commercially driven arts festival … I see many exciting opportunities for the Louisville arts community to keep expanding its reach and significance.”

BEEN THERE, DONE THAT

Perhaps the person with the most experience on the subject of starting a local art festival is Louisville Photo Biennial founder Paul Paletti. He’s not against the idea, but he understands the enormous amount of work and risk it involves.

“We tried doing a Louisville Visual Arts Festival a few years back,” he said. “First we tagged onto the ceramics conference coming to Louisville, then the next year we partnered it with the Photo Biennial. The third year, we tried to tie into painting, but there simply wasn’t enough support, and no one stepped up to the plate to take it on.”

He said he is too busy to take the lead for a third year. “Frankly, I don’t think we need a local-centric art fair. We need far more in the way of national and international artists to help us step up our artistic game. This would also draw more attendance from outside the area.”

Chris Reitz, of UofL’s Hite Art Institute, agrees. “You know we have the Open Studio Weekend and a few fairs, yes? Plus the Photo Biennial.”

He didn’t care for the working title Louisville Arts Festival, either (being sick with the flu made him direct). “Maybe we just need to brand it better,” he said.

Friends told artist Anessa Arehart recently they hated the word “festival.” Seems sad that anyone would hate such a nice word, but I’m not in marketing.”

OK, time to rethink the concept and the name.

To Biennale or not?

Perhaps the ideas that 1619 FLUX cofounder Jesse Levesque and Angie Reed Garner of garner narrative contemporary gallery came up with are ways to go.

Garner said she and her mother, the gallery founder, have been discussing the idea of a fair for years. “What we feel is missing —  speaking as artists, as art dealers and on behalf of the artists I represent — is a contemporary fine art fair that is affordable for underserved galleries and artists across the high South and Midwest. This would help Louisville and Kentuckiana artists to break out of the local art market, which is small. Meanwhile, Louisville could be well positioned to host it.”

Levesque said such a fair or biennial should not be limited to local and visual art. “I think that if you limit something that has the enormous potential to unite diverse people through art and performance and creative programming, such as a city-wide arts biennial, to limit it to local artists only, is short-sighted.”

To address the points mentioned above, let’s consider opening up our imaginary arts festival as much as possible — to make it more in line with the biennales in Venice, Basel and Miami. In addition to the usual paintings, sculpture and prints, add ceramics, new media, architecture, glass, etc., broaden it to include the performing arts. Add speakers, panels and discussions. Make it happen over many days, up to a week. Include local artists as well as state, regional, national and international artists. Organization is a major hurdle, so decide early on if it’s going to be annual, biennial, quinquennial or decennial.

Now here’s what the maybes had to say.

Artist Joyce Ogden, a Spalding University professor, likes the idea of including the performing arts in the festival, “the kind of thing where there would be events and programming … an opportunity for the local community to get out and see local work and productions as well as attracting tourists from around the region. Exhibits as well as performances.”

For Tim Faulkner and Margaret Archambault of Tim Faulkner Gallery, location is a primary concern. “A true citywide arts festival would need to be held downtown,” said Archambault, adding that perhaps it could be held at the Kentucky International Convention Center, now under renovation, or The Kentucky Center, where local musical talent could be easily incorporated.

“The real key for me, as an art dealer, is the venue,” said Cathy Shannon of E&S Gallery. “We don’t do outdoor art shows because of the unpredictable element — the weather. That said, an indoor fine art show would be ideal.”

Deborah Skaggs, former Deputy Director of the Kentucky Art & Craft Foundation & Gallery (now KMAC Museum), could not agree more. “My opinion is that it is almost the only way you are going to be able to market to out of town buyers. Collectors go to expositions in Chicago, New York, Miami and around the world to be able to see and buy at one venue over a short period of days.”

More on marketing. “It’ll have to be marketed regionally, have nationally-renowned artists represented, and a recognized museum or art patron would be key to attract top galleries,” Shannon continued. Pfalzgraf suggested that the festival feature “half local work, half outside work. Invite some bigger galleries from major cities east of the Mississippi with top artist talent to draw people here, then that larger audience from outside of Louisville will be exposed to the work being done by local artists.”

Artist Amy Elswick suggested tying advertising to Kentucky Crafted the Market and the Louisville Independent Business Alliance, or LIBA, as “it does come down to good organization and promotion.” Skaggs also believes Kentucky Crafted the Market, once in Louisville but now held in Lexington, is a good partner. “I think that they expanded it to include all visual artists in Kentucky. It is a juried show and my guess it has grown more successful over the years. That may be a conversation to have to see if they would bring it back to Louisville to the newly-renovated Convention Center, and there you would have an arts market festival ready made without reinventing the wheel.”

REACH OUTSIDE THE CITY

What about buyers and sponsors? Paletti feels community support is lacking, that “not enough people locally buy art. Maybe if we were able to bring in more buyers and traffic from outside Louisville, we would be able to support an arts festival.”

Archambault said, “The Louisville Arts Festival would need to be as big and impressive as it sounds. Perhaps not Derby big to start but at least as big as St. James, if not bigger.” It would need local and national sponsors, she said.

“It certainly would be a huge administrative undertaking,” said Ogden. “Not sure who out there would want to take this on.” Shannon believes the organizational team could be gleaned from our many local art organizations.

There you have it.

I’ve put the ideas in a format that, hopefully, will generate more talk — or kill the idea once and for all.

Artist Elmer Lucille Allen suggested we “poll the community to see if this is something that they would like to see.”

“Louisville loves Louisville in a powerful way,” said Tiffany Ackerman of Flame Run. “It has been proven time and time again by the number of independent business we have, groups like LIBA, and a mayor and local government who seem to revel in our uniqueness. This type of event could be well attended for sure, but who can ever really know how sales will end up. Look at how much our other local events have grown, whether it is Lebowski Fest, Forecastle or even the Butchertown Art Fair.”

“This would require a go-big-or-don’t-bother mindset,” said Shannon. “As for the nay-sayers, I’d remind them that we already have one of the country’s top 10 art festivals, outdoors, in October!”

Because of his expertise, Paletti gets the final word. His “big questions: What is the vision? Who will spearhead it? And what is the funding and budget?” Until those questions are answered, it’s only a lovely conversation.