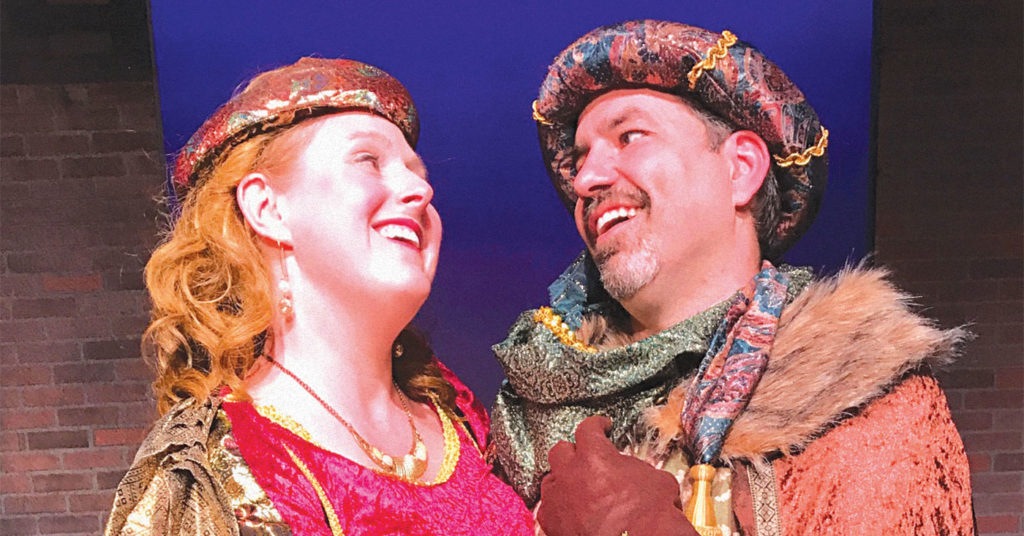 Shannon Speicher and Josh Gilliam in the CenterStage's 'Kiss Me, Kate.'Photo courtesy of the Jewish Community Center of Louisville

First up is “Kiss Me, Kate,” presented by The Jewish Community Center’s CenterStage. It’s a musical about a musical version of “Taming of the Shrew.”

Louisville audiences got to see an excellent “Taming of the Shrew” at Kentucky Shakespeare a couple years back, and now they can consider the story of romance between Kate and Petruccio from a different perspective.

The action is on the set of a musical adaptation of “Shrew,” but the meat of the plot focuses on the relationship between the show’s director, Fred Graham, and his star/ex-wife Lilli Vanessi.

It’s an interesting exploration of the power dynamics between a man and a woman, and, like “Shrew,” it can crackle with chemistry and humor when handled correctly.

The CenterStage production of “Kiss Me, Kate” marks the second time the company has presented work as a community partner of Kentucky Shakespeare. It’s a cool way for the companies to cross-pollinate their audiences.

It’s a great collaboration. CenterStage gets to court audiences downtown, and KY Shakes gets to offer its audience a free, high-quality production, presumably without incurring the full cost of mounting said production. “Kate” (and last year’s “West Side Story”) are remounts, produced first for CenterStage’s own audience at the JCC.

But that’s all inside baseball. Of more concern to the audience is the music by Cole Porter, and the script by married couple Samuel and Bella Spewack, who reportedly had their own marital problems while working on the script.

It’s a nice piece of golden-age musical theater, using the evergreen theatrical device of setting a play within a play, a device that Shakespeare used a couple of times himself.

This week’s performances in the park also includes a new collaboration for Kentucky Shakespeare, as it hosts Cincinnati Shakespeare’s production of “Merry Wives of Windsor.”

During a brief chat with LEO, KY Shakes’ producing Artistic Director Matt Wallace talked about how the inter-city exchange began, and what he hopes for the future.

“I was talking to Brian Phillip, their artistic director, at the Shakespeare Theater Association conference last year at Notre Dame, and we just started talking about the ways we could work together and possibly collaborate,” said Wallace.

In his time at the helm of KY Shakes, which I’m calling the Wallaccian Era, Wallace has tirelessly sought out new partners and performance opportunities for the company. So it’s not surprising that he’d be on the hunt for new ideas while attending a national conference for Shake-centric companies.

Turns out Cincy Shakes has a couple of touring shows, pretty similar to KY Shakespeare’s spring tour. Since the Cincy Shakes is already touring a show, it makes it easy to bring them down for a couple of evenings.

This year Cincy Shakes is touring “Romeo and Juliet” and “Merry Wives of Windsor.” While “R&J” can always put butts in seats, Wallace decided to bring down “Merry Wives,” because it dovetails perfectly with KY Shakes’ four season plan to present a series of Shakespeare’s histories, a plan that started this year with a kick ass production of “Richard II.” That plan is soon to include one of Shakespeare’s more celebrated creations.

“We’re getting ready to introduce our audiences to the character Falstaff next year,” explained Wallace.

Now, some of you are like “Fal who?” but Bardophiles are pretty familiar with the name.

First introduced in 1593’s “Henry IV” part one, Sir John Falstaff, a slovenly, hard-drinking knight, provides a comic relief. He’s in “Henry IV” part two as well, and while he doesn’t actually take the stage in the script of “Henry V,” he’s mentioned, and pretty frequently directors will also incorporate a little chunk of “Henry IV” into their cutting of “Henry V.”

Much of the action of “Henry IV” revolves around King Henry’s attempt to get Prince Hal, his son and heir, to take the crown seriously. Falstaff and his friends are Hal’s drinking buddies. They present a serious obstacle in getting the prince to calm down and get focused on ruling, because whoring and drinking was apparently pretty fun back in the day.

Elizabethan audiences loved Falstaff, and it’s reported that Queen Elizabeth did too. So much that she asked Shakespeare to write a play that showed Falstaff in love.

It’s unclear exactly when Shakespeare wrote “Merry Wives,” and like most details of Shakespeare’s life and work, scholars have a ton of theories. It was first published in 1602 but it’s probable that it was written several years earlier.

And don’t get me started on all the Falstaff/Oldcastle name change theories. I don’t wanna catch beef with Oldcastle’s heirs, as Shakespeare supposedly did back in the day. Special bonus fact: The name “Falstaff” is also an impotence joke, because Shakespeare is filthy AF.

So “Merry Wives” is Shakespeare’s prequel, and like George Lucas’s “Episode One,” critics can be a little harsh. Personally I think Shakespeare at his worst is still better than most playwrights at their best, and I’m looking forward to seeing the show this Sunday night.

Wallace says it’s possible that this collaboration with Cincy Shakes will continue, but it all depends on how the audience reacts. You only have one more chance to catch “Merry Wives,” this Tuesday night. •