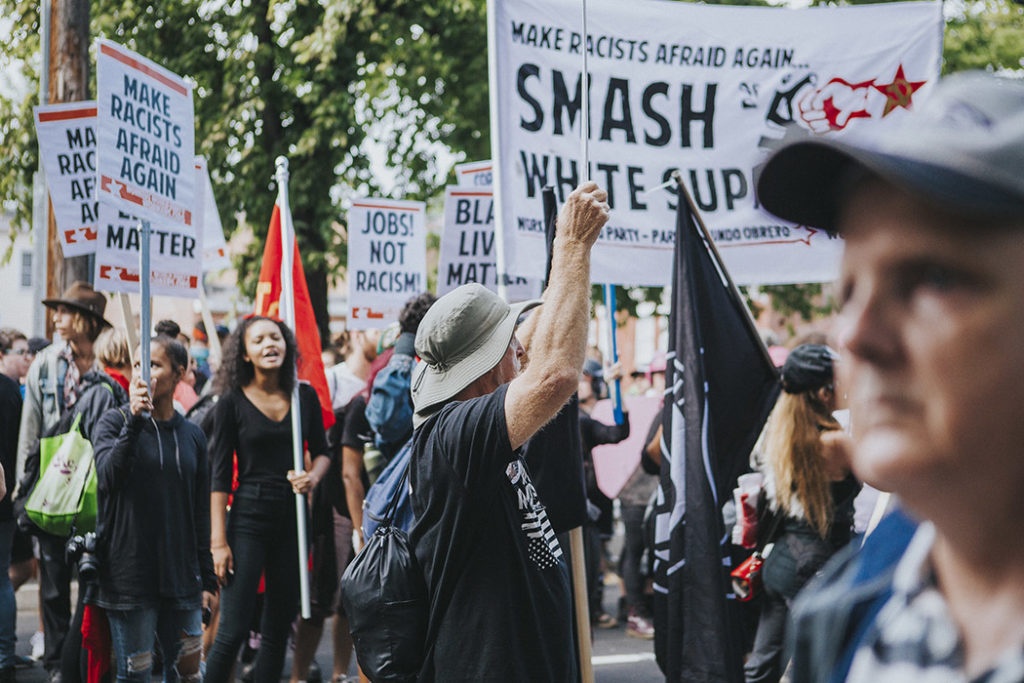 The rally in Charlottesville (photo by Eze Amos)

Two weeks ago, Holly McGlawn-Zoller, Sean Liter and other Louisvillians loaded up and headed to Charlottesville to counter-protest the Unite the Right rally. Both McGlawn-Zoller and Liter identify as antifa, or anti-fascist. And both witnessed a nationwide  tragedy — the killing of Heather Heyer by a neo-Nazi in a car. In the crowd that Saturday, McGlawn-Zoller was collateral damage: Her leg was broken as the car barreled through the crowd. Here’s a first-hand account of what happened:

LEO: How did you get involved with the protests in Charlottesville?
Sean Liter: When we heard about the Unite the Right Rally, we began reaching out to people that we knew from that town, other anti-fascists crews and other activist groups. A lot of that organizing effort came out of people who had been in touch after the rally in Pikeville, [Kentucky] months earlier. There is a network, around the region, really all over the country. When one of these things happen, we organize.

Can you give us an idea of how things progressed day by day? How did the police or even other protestors handle the events?
McGlawn-Zoller: We went to downtown Charlottesville Friday night, trying to get a feel for what we would see the next day. There were maybe 20 UVA students standing around the statue — the destination of the march — linking arms surrounding the statue, mostly women of color. We went with them, even though we were vastly outnumbered. What happened is we ended up being surrounded by 200 to 300 Nazis. They maced us, attempted to burn us with torches, tried to break torches over our bodies, pulled guns on us — it was terrifying. Meanwhile, the police were about 20 feet away. They did not move on the Nazis. They did not move to get us out. We got ourselves out, even though we were blinded.

Liter: The dean of students was there. He stayed. Someone who’s been in our movement for a long time, I asked him if he’d seen that, and he said never. You look at people of color and see the looks on people’s faces, the fear. You don’t forget that.

McGlawn-Zoller: As far as Saturday goes, we got there three hours before their permit had even started. They were already on the streets. They had loaded people out. People were being beaten. People were being maced. It was both sides battling it out. The numbers that I heard is that there were 3,000 people out on the streets, and there were less than 10 arrests. At any BLM rally, people would have been well arrested. The fact that so many white men weren’t arrested — it’s systematic racism. I’ve been to mass protests for years. There are barricades that they put on the streets to keep demonstrators safe. And there was none of that. It was just an all-out fight. The cops were pretty much not even there. I just forgot that police presence was even there. Then we basically had been separated.

Liter: At some point with antifa and BLM and other protestors, we ran the street. I stood there and I watched it accelerate down that road.

McGlawn-Zoller: People like to say that if you go out and protest, that they’re getting what they want. But if you don’t, they get the attention in other ways. They got that attention on Saturday. We had two marches that merged and there were 2,000 antifascists in the street. The car came out of nowhere. It was a beautiful moment that was destroyed.

I understand that you were one of the victims of the terrorist James Fields. What led up to that? Where were you when that happened and what moved the protest in that direction?
McGlawn-Zoller: I was one of the victims of that car accident. I was injured in that terrorist attack. Before that, we had gone on a march to gather up all the antifascists that were separated, and we had gathered, and we were going to march back to the park, and the car came out of nowhere. It’s not like things escalated to a point where cars would crash into the crowd. The sound was something I’ll never forget. I was immediately pulled back to our medics. They stabilized my leg. After a couple hours, I was taken back to the hospital. There weren’t enough beds. Other people took priority, which was fine by me. When we got to the hospital, they would not let anyone back with me.

What was the reaction on the ground? How did other protestors respond? How did the authorities?
McGlawn-Zoller: The reaction on the crowd was complete chaos. We couldn’t see who had been hurt. Everyone was trying to account for their people. For a good 20 to 30 minutes, I didn’t know if it was one of ours who had been hit. The National Guard showed up, but really all they did was block the streets so no Nazis could come at us while we were on the ground.

How can people got involved? I’m especially curious about people that have children or something like that. I have young kids, and have no idea how to stand up for civil liberties in a more direct way. What advice would you give
McGlawn-Zoller: People putting the word of antifascism out there.

Liter: There are all roles. Not everyone in any of these crews are fighters. We have people that work all different roles. You can’t have what you see in the street without people handling childcare. Where we go from here, depends on how many people get together.