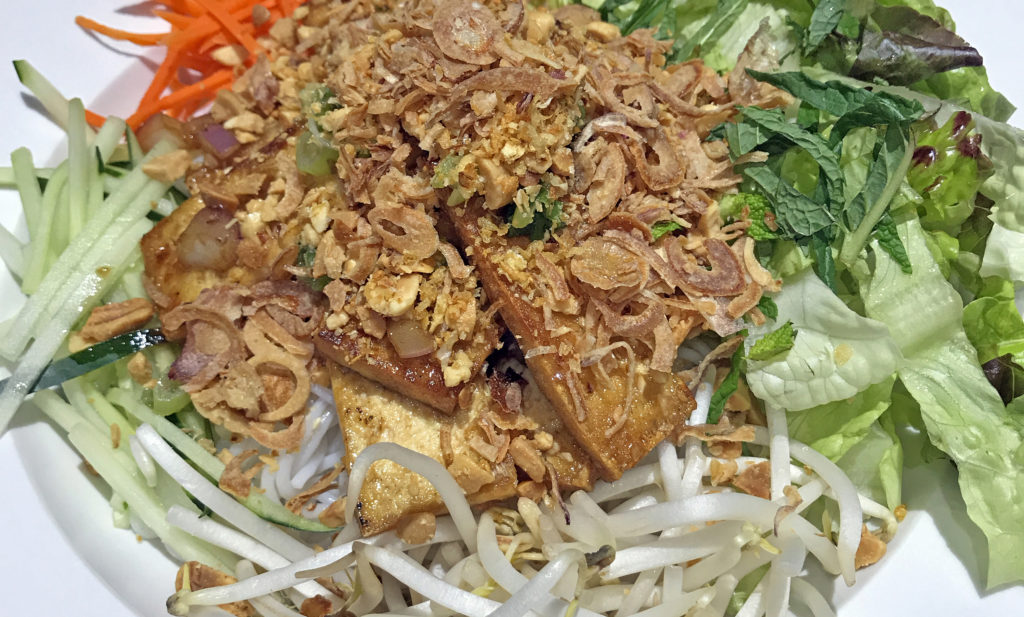 Mmm, it’s in the 90s again. Wouldn’t it be great to go get some steaming hot soup? How about a big bowl of pho from Pho Cafe?!

No matter how much a hot bowl of creamy chowder says “winter” to you, think about the Vietnamese and all the other nationalities that ring Asia’s tropical southeastern edge, where hot soup is a main meal. There, people understand that hot soup cools you off.

The theory goes like this: You don’t want to fill your innards with something cold when your outsides are hot. Too much contrast. Better to seek a Zen-like balance and if that makes you sweat, good: Sweating makes you cool. That’s why fiery food is commonplace in the same tropical places that love soup for dinner. Eat your soup, make it hot and spicy and break out in a sweat. Then, catch a breeze and aaah, that’s cool.

So, with that settled, let’s not wait until the leaves fall to get some pho. If you want to say it the Vietnamese way, by the way, pronounce it “fuh” to rhyme with “duh,” not “foe” to rhyme with “dough.” I’m pretty sure the nice folks at Pho Cafe won’t mind either way, although they do pronounce it correctly when they answer the phone.

Pho Cafe opened at the end of May, replacing the last local outlet of the Tom+Chee chain, in the short strip on Bardstown Road that’s turning into a mini restaurant row.

Bright tomato soup-red booths and large black-and-white floor tiles retain hints of its predecessor, but a quick remake with subtle off-white and dark-gray walls has brought a more upscale feel, and the kitchen area is now enclosed behind rippled frosted glass. Undraped, dark-gray, granite-look tables are set with simple flatware and chopsticks rolled in napkins; dishes are served on simple, but attractive, white earthenware.

Chef Tuan Phan and host Anderson Griffin have both been at Dish on Market, and Tuan Phan also has Asiatique on his resume. He’s put together a Vietnamese menu that’s a good bit more concise than, say, the 125 items on the bill of fare at the iconic Vietnam Kitchen, but Pho Cafe’s shorter menu won’t be unfamiliar to fans of Louisville’s South End Vietnamese favorites.

Three basic phos come with your choice of three kinds of beef and one each of chicken and seafood. They range in price from $10.50 (for beef meatball or chicken) to $15 (for a seafood mix of calamari, scallop, shrimp and surimi “crab”). Other dishes in the pho section include bun thit nuong, a vermicelli noodle bowl, and com thit nuong, a rice platter, both from $11 to $13, depending on your choice of pork, chicken, tofu, beef short rib or shrimp.

A half-dozen other entrées billed as “wok specialties,” most offering a choice of pork, chicken, tofu, extra veggies, beef or shrimp at varying prices, are mostly $10 to $13; shaking beef, a popular Vietnamese beef tenderloin stir-fry that was a signature dish at the now-defunct Basa Modern Vietnamese on Frankfort Avenue, tops the menu at $16.

Appetizers, banh mi sandwiches and a sweet chili salad range in price from $3.50 (for three veggie egg rolls) to $9 (for the salad with shrimp). Adult beverages aren’t available yet, but management said the necessary licenses are pending. Meanwhile, you could achieve a satisfactory buzz from strong, sweet Vietnamese iced coffee ($3.75).

A pair of veggie summer rolls ($5.50), slabs of tofu and crisp, raw vegetables and rice noodles wrapped in translucent rice paper, made a cooling start, with a spicy peanut-hoisin sauce for dipping. Three small, golden brown veggie egg rolls ($3.50) were very crisply fried and not at all greasy, stuffed with a tasty and healthy combination of finely-shredded, crisp raw carrot, mushroom and fine noodles.

Service neglected to inquire about heat levels, and we neglected to ask, so red curry ($11) and bun thit nuong ($11) came out showing only a wimpy burn, but the big squeeze bottle of sriracha sauce on the table took care of that and both were otherwise delicious. The curry was built on a base of yellow egg noodles tossed with a stir-fried combo of chicken, cabbage, carrots, bean sprouts and other veggies. The bun thit muong was a savory combination of tender rice noodles and crisp bean sprouts, fresh, chopped lettuce and crunchy cucumber and carrot, topped with slabs of fried tofu (or your choice of meat) covered with fried shallots and garlic and stir-fried veggies.

They call this place Pho Cafe for a reason. It’s all good, but the pho is the thing. With a tall glass of zippy, tart Vietnamese lemonade ($2), dinner for three totaled up to a reasonable $47.44, plus a $10 tip.