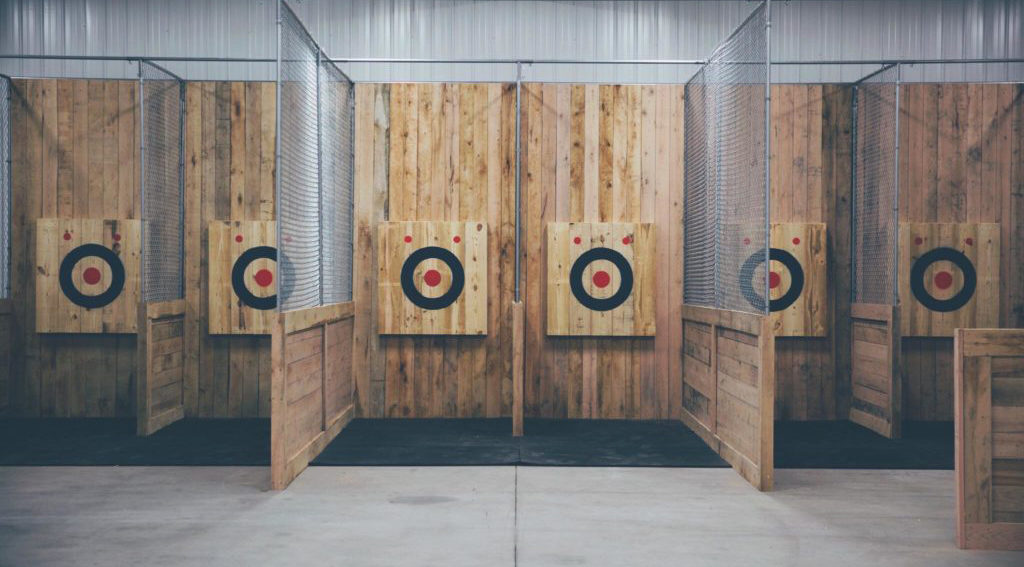 A short distance from the skatepark on Clay Street is the newest addition to NuLu, Flying Axes. It is the first axe-throwing venue in Kentucky, and Saturday marked the grand opening with an all-ages event.

“Everyone who made fun of me for investing in this can suck it.”

That was Steve Huey, one of the 20 investors in the business. He stood behind me in line while everyone waited to reserve a time slot with a coach.

The line felt like a marathon — it seemed everyone wanted a taste. Not of the frosted axe sugar cookies hanging out on the bar. No. They wanted a taste of danger. For $10, you got 10 minutes of unlimited throws with a coach, but only after you sign the waiver that dismisses any unfortunate accidents. Axe-throwing turned out to be really fun, easy and totally safe when you find the right grip. It also turned out to be a refresher from the typical boredom solutions in this town. I think Zack Pennington said it right: “It’s a different vibe than just sitting at a restaurant or bar and just consuming calories — why not throw some axes?”

Pennington, one of five partners, is an entrepreneur and a guitarist in the band Light Treasons. He had never thrown an axe until after visiting a Canadian axe-throwing venue last year, where a lead led him to discover the potential of marketing this badass sport here. Pennington embraced the endeavor along with LEAP creative director Mike Brown and Forest Giant partners Jon Shaw, Dave Durand, and Jesse Lucas.

Flying Axes Louisville was announced officially last fall, while a forthcoming location in Covington, Kentucky, was just announced earlier that afternoon. Pennington said they want to open three to five more locations in the region within the next year. I asked if he feels like they should wait before pursuing multiple openings.

“No, we’re pretty confident,” he said. “There is a solid history with the Canadian businesses… It’s a good precedent to know that you can expand.”

“Even though [axe-throwing] is a physical thing, you don’t have to be athletic,” he added. “We’ve had 80-year-olds to 8-year-olds do it. It doesn’t matter how strong you are, you can be a good axe thrower. It’s more about learning the skill … You could do it from a wheelchair, if you can throw.”

Each cage is set up with two, large wooden targets and a digital score counter mounted above (a custom design by Forest Giant). I was paired with a gentleman, my competition, and the only rule was that no one retrieved their axe until both parties had thrown. Ethan demonstrated the correct throwing stance, which involved some linear comparison to bowling and yoga, but it was the visual description I needed to stick a bullseye on my last attempt. Everyone should have left that night remembering the adrenaline of their best throw.

Flying Axes will soon host weekly league meetings during which teams will compete in a tournament towards a championship title. According to Pennington, this is just one way that Flying Axes wants to become closer to the community: “We’re surrounded by a bunch of really big companies that have people who work 9-5. We just want to be a cool place to hang out after work, throw some axes and drink some beers … A lot of my friends complain that whenever they’re bored, and they want to hang out, the only options you only have usually are eating and drinking. And at least this gives you a chance to burn some calories and be active.”

Flying Axes proved its potential on opening day. While the prices per session aren’t ideal for those wanting daily axe-throwing practice, it’s still a cool place to take your date or meet up with friends.