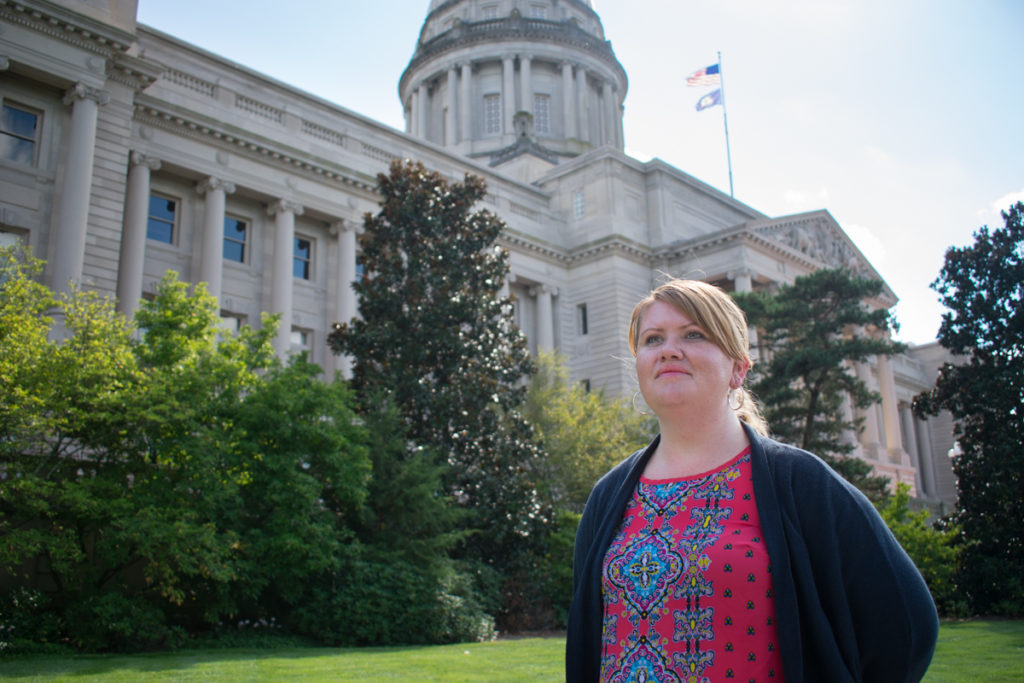 At 14, Donna Pollard’s anger and outbursts landed her in a youth behavioral facility in Southern Indiana.

There, she met a 29-year-old man who counseled troubled teens. He would brush up against her and smile.

They started dating shortly after she returned home to Laurel County, Kentucky. Her mother, Pollard recalled, was anxious to get her out of the house and would drive Pollard to meet her boyfriend. And with her mother’s permission, 16-year-old Pollard soon found herself at the county clerk’s office, marriage certificate in hand.

“Walking in there I felt so empowered,” she said. “Today’s my big day. I get to get married, and I’m going to have all this freedom.” The clerk wouldn’t even look at her, Pollard recalled. In that moment “the fantasy fell off.”

On April 22, 2000, Donna Pollard became one of the thousands of children who marry each year in the U.S. Child marriage is steadily declining, according to Centers for Disease Control and  Prevention data. Still, Kentucky has one of the highest rates of child marriage in the nation, according to data recently published by Frontline and The New York Times.

A review of Kentucky marriage data over the last 17 years shows that 11,000 minors have gotten hitched in that period — some as young as 13. These marriages occur across the commonwealth but are more common in the eastern counties, according to marriage license data obtained by the Kentucky Center for Investigative Reporting.

Child welfare advocates say child marriage puts kids at risk for abuse, neglect and missed opportunities. Advocates have pushed legislative challenges in different corners of the country, some of which have been successful in raising the minimum marital age to 16 and 17.

Twenty-seven states have no minimum age requirements, according to the Tahirih Justice Center, a national advocacy group fighting forced marriages and human trafficking.

No one has challenged Kentucky’s law, which allows judges to approve marriages for children 15 and younger, provided the female is pregnant. Children 16 and 17 can marry with parental consent.

In many cases, it’s up to judges — not parents — to decide who is fit to marry young. Often, teens write letters lobbying the judge.

In Barren County, a 15-year-old mother of one explained that she desired a life away from her own mom.

“We would like to get married today,” she said of her 16-year-old boyfriend, “not only because we love each other very much, but because we live with my mother, and she has caused us a lot of problems.”

“We would greatly be happy if you was the one to marry us today,” her letter read.

The teens received the judge’s OK.

Parents have written in with blessings or objections. In 2011, a mother pleaded with a reluctant judge in Lexington to let her 15-year-old girl marry a 27-year-old man. “[My daughter] has been studying and working on pre-GED … she is planning on being a nurse working with babies,” she wrote. “I am giving my permission.” The judge denied the marriage.

In Pulaski County in 2012, a judge OK’d a 17-year-old girl and a 19-year-old man’s marriage. A few months later, the girl’s parents wrote a fiery letter to the judge. “Our daughter was married against our decision and behind our back,” wrote the father.  “The boy has no concern for her safety or well-being.”

Since 2002, half of the 855 petitions filed in Kentucky have been approved, according to data from Kentucky’s Administrative Office of the Courts.

Loophole for sex with minors
Though marriage laws across the nation attempt to balance parental liberties with government protections afforded to children, the laws around marriage and sexual consent can contradict one another.

Since the age of consent in Kentucky is 16, this creates a loophole for adults who have sex with minors. Once the couple marries, adults can’t be prosecuted for statutory rape.

“From a public policy standpoint, it definitely is beneficial to have children raised in the most stable environment possible,” said Erin Jackson, a Chicago healthcare attorney who has written extensively about child marriage. “But I think it’s a real fiction being perpetrated that a child is better off being raised in a household that is comprised of a teenage girl and her statutory rapist.”

For example, Whitley County District Judge Cathy Prewitt approved only two of the 12 requests in her court since 2010. In Barren County, former District Judge John Alexander granted all 13 petitions that landed on his desk between 2010 and 2016, including the marriage of a 15-year-old girl and a 30-year-old man.

“There’s nothing in the statute that differentiates people that are a year apart in age from 10 or 12 or 15 years apart in age,” Alexander told the Kentucky Center for Investigative Reporting.

He said the statute is “frustratingly devoid” of benchmarks, but that as a judge he isn’t the one to manipulate the law.

“If the legislature wanted to repeal it they could,” Alexander said.

So far, lawmakers haven’t tried, according to the Legislative Research Commission.

That could soon change. A group of advocates are working to pitch legislators on a proposed law that would set the minimum age of marriage at 16.

The group has closely watched cases in other states. Virginia and Texas recently raised the age to marry to 18, or 16 if the child is emancipated. New Jersey Gov. Chris Christie vetoed a similar measure, citing religious freedom.

In Kentucky, there could be resistance to a legislative challenge. Cindy Marlow of the Christian, conservative group American Family Association of Kentucky, said government should have no role in this matter.

“You should be able to raise your child in your beliefs and how you feel it is important to raise them,” Marlow said.

‘If two people love each other…’
Nick Syrett, an author and professor of Women, Gender, and Sexuality Studies at the University of Kansas, said child marriage is declining because Americans recently came to realize that kids are fundamentally different than adults.

“In the 19th century kids, worked on either their parents’ farm or for wages. They did lots of adult-like things,” said Syrett, who wrote American Child Bride: A History of Minors and Marriage in the United States.

For some girls, especially in rural and poor areas, these notions persist, Syrett said.

“Poor girls generally don’t see themselves going to college or graduate school,” Syrett said. “They expect to get married at some point regardless. Doing it earlier rather than later doesn’t seem like putting off their life goals.”

Teen brides tend to end up with less education and higher rates of poverty, and are more vulnerable to domestic violence. And these marriages don’t tend to last — a 2012 study from the Centers for Disease Control and Prevention found teen brides are two-thirds more likely to get divorced within 15 years than those who marry later.

The Kentucky Center for Investigative Reporting reached out to several Kentucky women who were married as teens. Some were still married to their teen sweethearts. Several had gone through divorces. A few had filed domestic violence charges against their husband. None wanted to speak on the record with their names attached.

“It doesn’t matter if it’s a teen marriage or not, if two people love each other and are devoted to each other 100 percent and trust each other, all will be OK,” said a woman in Barren County, who shared her thoughts via Facebook. “I know a lot of people that got married at a young age and are still going strong.”

For Donna Pollard, her 2000 marriage collapsed shortly after that ceremony in a Tennessee county clerk’s office. She had a child at 17. She left her husband shortly later, allegedly because of abuse.

Pollard now lives in Louisville, works full-time for a healthcare benefits company and raises her 10-year-old daughter. She spends off hours lending her voice and story to victim advocacy groups such as the Kentucky Attorney General’s Survivors Council.

“I decided when I was in my late 20s I had to speak up, because I was suffocating,” she said.

Pollard is also working to establish a nonprofit, called Survivors’ Corner, that would provide leadership skills for victims of sexual assault, abuse and exploitation.

“That’s the kind of encouragement I want to offer,” she said. “You can take a stand and speak your truth.” •

This article was produced by the Kentucky Center for Investigative Reporting, a nonprofit newsroom from Louisville Public Media. Read more at kycir.org