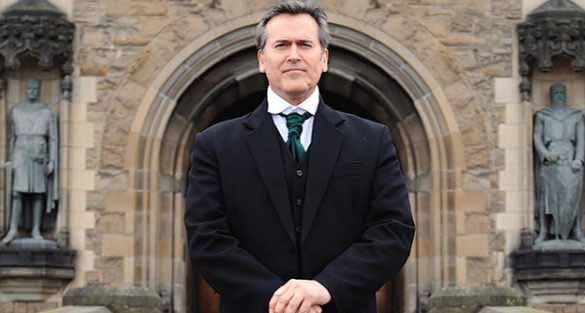 “I never set out to become a B movie actor, but fake blood doesn’t wash off so easily.”

So says Bruce Campbell, longstanding acting/producing legend of genre films and TV. He first came to attention as star of the original “Evil Dead,” which was a bargain-basement DIY project with childhood friend Sam Raimi. Campbell developed a reputation for quality across a rich history of quirky acting opportunities — so when Raimi was tapped to direct big-studio “Spiderman” movies, Campbell naturally had to get a bit part. Adoring geeks pointed him out, saying: “Do you know who that is?”

And the legend grew.

Campbell soaked up the attention, and gave back generously. He wasn’t aiming at being the loudest wit dominating his projects; instead, his general persona centered between a charismatic everyman and a tell-it-like-it-is smartass. He was a natural fit for guest-star appearances as conventions for science fiction, horror and comics exploded into their own industry.

If you couldn’t get enough Bruce Campbell on-screen, or at your local comic-con, he landed on bestseller lists with his memoir ”If Chins Could Kill: Confessions of a B Movie Actor.” He has since extrapolated on some autobiographical tall tales to make a novel: “Make Love the Bruce Campbell Way.” But now it’s time again to set down real-life adventures, and so we have “Hail to the Chin: Further Confessions of a B Movie Actor.”

The easygoing read follows him at home (farming lavender, of all things) and on the road (with some thoroughly engaging nature writing). It closes as he revives his first on-screen triumph in the current cable series “Ash vs. Evil Dead.”

Bruce Campbell is coming to the Clifton Center on Aug. 21 to promote his new book with a unique evening. Instead of simply reading, he’s going to precede his signing by emceeing a game-show-style quiz for all attendees. LEO recently got in touch with Campbell at his home in Oregon to get the lowdown on “Last Fan Standing” and ask about the quiz.

Bruce Campbell: It’s a game show for geeks. The questions are: ‘How much does Thor’s hammer weigh’ — stuff like that. “Star Wars,” sci-fi, fantasy, horror. Nothing that you would hear on ‘Jeopardy,’ for the most part. Everyone who walks in gets a clicker. Anyone in that audience can take it all. You do some prelim rounds — and then raise the stakes and whittle it down to one. There’s some great come-from-behinds, dramatic finishes. We’ve done this at conventions before; some come up dressed as Stormtroopers [from the “Star Wars” universe]. Joe Blow can walk away with an amazing prize. [It’s] one more reason to show up. ‘Get a book and let’s have fun with the game show.’”

LEO: Your writing is much more eclectic than I’d expected.

I’m going to enter the ‘Act III’ of my life as soon as ‘Ash vs. Evil Dead’ is done. I’ve developed a bunch of weird scripts and stuff. This book I wanted to get out and really support because [writing and publishing] is a world that you can control more — rather than a movie, where there’s a lot of chefs involved and there’s so much money involved that everyone freaks out.

Scripts? And more projects you want to produce? Do you see yourself backing away a bit from acting?

Yeah, kinda all of the above. Y’know, I’ve spent a lot of time on other people’s treadmills, creatively, and on other people’s shows. Seven years on ‘Burn Notice’ was awesome — but it’s not my show, and that can have its creative limitations. Now, I think, is about the time: 59, pushin’ 60. If not now, when?

Your character on ‘Burn Notice’ was awesome and also balanced — the middle-age sort-of action hero. It seemed well-written; did you find need for tweaking?

It all depends on the show-runners and the writers and the producers and the other actors. Some shows are very open to new dialogue, little bits and bats. Some of ‘em are not open to anything — and those are the ones that bore me to tears. You’ve got to be a really good fucking writer before I’m going to buy that shit. I’ve spun a lot of bad dialogue in my day. On ‘Burn Notice,’ I’d add a button if I didn’t think the scene had enough zip. And I knew they could just cut it off. I like it when the actor has the power to ad lib — because the producers always have the power of the edit. They always have the last laugh.