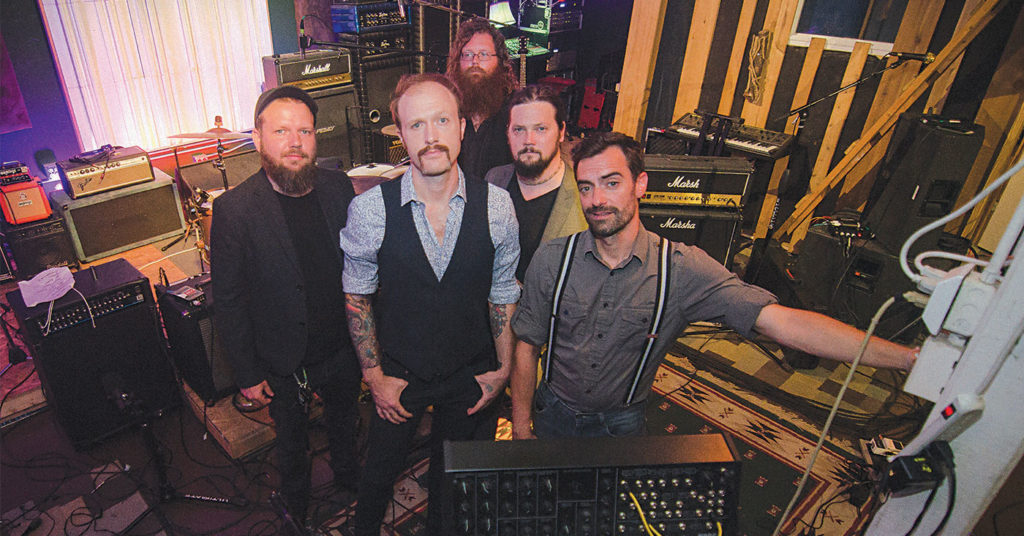 Before the two-day, four-stage Seven Sense Festival takes over Swiss Park/Hall and Zanzabar this weekend, we chose four Louisville bands and four out-of-town bands that you shouldn’t miss.

Quiet Hollers
Swiss Park  |  Friday  |  6 p.m.
With ambitious and thoughtful indie-rock that has shot them past their alt-country roots to a currently indescribable territory that morphs with every song, the Quiet Hollers are contemplative and introspective with their lyrics, but can become unhinged and visceral with their live shows. On stage, they have a punk electricity about them, that collective charisma that lifts the show past the albums, building on an already-solid foundation. —Scott Recker

Diane Coffee
Swiss Park   |  Friday  |  8:30 p.m.
The solo project for Foxygen drummer Shaun Fleming, Diane Coffee skips across genres, touching on psychedelic, ‘60s-style folk and shiny, vintage pop sensibilities, but with a contemporary indie-rock vibe that’s atmospheric and largely ignores borders. Wide-ranging and whimsical, Diane Coffee is really good at melting together a whirlwind of sounds, creating something that scatters all over the musical map, without being overwhelming.—Scott Recker

Satellite Twin
Zanzabar   |  Friday  |  8:45 p.m.
It’s a shame that bands such as Fugazi or Unwound gave up almost two decades ago now, but that fire lives on in Satellite Twin, who worship at the altar of noise-rock with a solid hook. This is heavy and unrelenting music, but with a pop soul, the kind of song structure that gets you banging your head along to the beat. The vocals have a Joe Strummer feel, shouted but melodic, and with something to say. The music is tightly wound and high strung, anthemic and fist pumping in the best, most righteous way.—Syd Bishop

Lee Bains III & The Glory Fires
Swiss Hall  |  Friday  |  10:45 p.m.
Sounding like a supercharged, deep South version of the Stones, Lee Bains III & The Glory Fires plays no-frills, visceral rock and roll with riffs that seem to send a double shot of adrenaline directly to the most primal part of your brain. They’re the sort of band that makes liquor disappear in double time, producing a wall of sound that runs on unfiltered energy, but with a splash of that soulful rhythm that is tied to Muscle Shoals.—Scott Recker

Jamaican Queens
Zanzabar  |  Friday  |  11 p.m.
Fat synths and electro beats serve as the backbone of the band, a platform to wax poetic with their modern blue-eyed soul, auto-tuned and vocoded for effect, not necessity. This is indie-pop with a cyborg heart, a sleek exoskeleton that hides a creamy interior core, thoughtfully mining genres for their best constituent bits. As such, theirs is a pastiche blend of styles from dance music to R&B. —Syd Bishop

Otis Junior & the Jesse Lees
Swiss Park  |  Saturday  |  4 p.m.
There may be no one more smooth than Otis Junior, who backed by the Jesse Lees, taps into the finest Motown greatness, updated with a new Millennial swing. Otis’ voice is pure velvet, a sultry baritone that measures a soulful confidence against an earnest sincerity. His is mood music, if the mood you’re looking for is thoughtful and introspective, an honest voice in troubled times. There is an ease to his music that recalls the haze of nostalgia, good and bad, a morass of smoky memories that pull at your soft spots. The Jesse Lees are no joke, keeping that old-school vibe classy as fuck, and twice as nice. Slow dance to this and lose yourself in the moment.—Syd Bishop

Howell Dawdy
Swiss Park  |  Saturday  |  9:30 p.m.
Sharp, satirical and weird in that rare, unique, captivating way that transcends standard songwriting, Howell Dawdy is someone who is capable of making you think and laugh with the same sentence. Veering from rap to country, Alex Smith’s solo project builds these bizarre little universes that end up being zany, poignantly-observant cultural tales, kind of in the vein of Stephen Colbert or Kurt Vonnegut — people who can twist absurdity into analysis.—Scott Recker

Lung
Zanzabar  |  Saturday  |  10:15 p.m.
There are so few opportunities in life to head-bang along to a cello, but Lung offers that opportunity. The Cincinnati duo featuring Kate Wakefield on cello and Louisville ex-pat Daisy Caplan on drums, Lung are kind of like if Rid of Me-era PJ Harvey or In Utero-era Nirvana kicked replaced the guitar with the cello. The thing is, it’s not a gimmick. This is legitimately awesome music no matter how it’s made, or who makes it. Wakefield’s voice is an absolute delight, and Daisy is a boss with the skins, cleverly accentuating the music with polyrhythms and one enormous sounding kit.—Syd Bishop