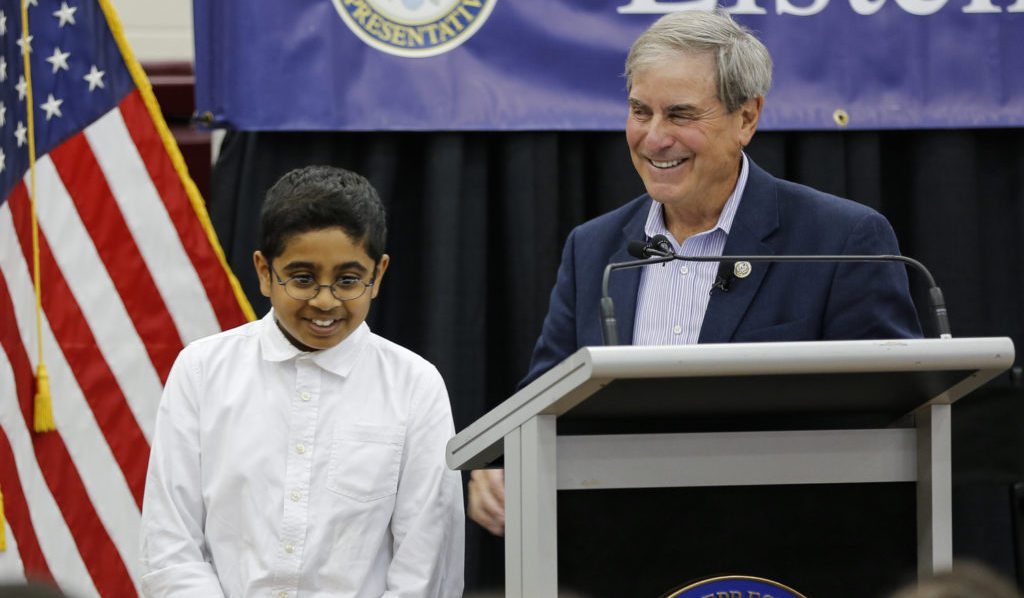 Eleven year old Pavan Venkatakrishnan walks off the stage after speaking at the podium during the Q&A portion of the Town Hall. Venkatakrishnan applauds the ACA, and states that it is "an amazing bill with so many provisions that help so many people", but he asks "Why didn't Democrats do a better job of marketing the bill?"

U.S. Rep John Yarmuth told a crowd recently that the tone of debate over healthcare must change from one of personal attack to one of policy debate.

“We need to change the tone of our dialogue, it really isn’t productive, so if I believe that it’s accurate to say that a certain health care policy will result in people dying, it’s OK for me to say that. It’s not OK for me to say that the supporters of that proposal are killers. I think that’s the kind of distinction we have to make,” he said during the town hall meeting Sunday July 10, at Bellarmine University.

A strong supporter of the Affordable Care Act, Yarmuth discussed how much the bill has benefited Kentucky, in particular causing the uninsured rate to drop to 6.1 percent from 13.6 percent. Every state that expanded Medicaid had huge drops in the number of uninsured as well.

Yarmuth said the Senate’s healthcare proposal, written by Kentucky’s senior senator, Mitch McConnell, would cause 22 million fewer Americans to have coverage. And then there is the threat of $772 billion in cuts to Medicaid over the next 10 years

Many in the audience took extensive notes, and many shared their personal stories, concerns and questions surrounding the future of a healthcare system.

Yarmuth encouraged those in attendance to continue to pressure Congress, and he left with words of motivation: “Keep fighting, keep being loud.”