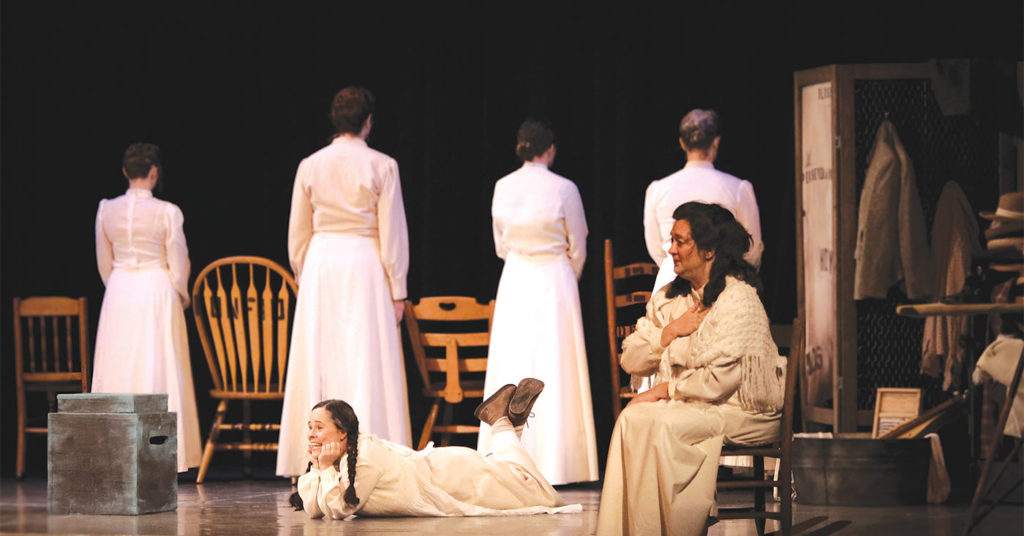 The Looking for Lilith Theatre Company is celebrating its 15th season with a generous, multifaceted festival called UNHEARD [outloud]. It’s a perfect title. Looking for Lilith has always been a mission-driven company that focuses on discovering and sharing untold stories, especially the stories of women and other people frequently marginalized in both our public discourse and in the theater.

UNHEARD [outloud] is a collaborative enterprise that finds LFL partnering with other companies in a mix of full productions, staged readings and workshops addressing a number of social justice issues (and the ways in which theater plays a role in those issues). Partner presentations include works by Pandora Productions, Resonant Light Theatre Project and Adanma Onyedike Barton.

And the lineup includes works both old and new.

The Festival opened last week with a revival of Looking for Lilith’s very first production. “Crossing Mountains — To Teach All We Can and To Learn All We Can” relates the history of the Hindman Settlement School in Eastern Kentucky.

It is a “devised” work, created collaboratively by company members (Carrie Piccard, Shannon Wooley Allison, Trina Fischer and Jen Thalmanand Mik’ala Jacobs), and it is rooted in the words and experiences of those whose stories are being told.

It’s an inspiring story and a superb piece of theater — and though earlier performances in the intimate space at the old Rudyard Kipling have a legendary status among long-time LFL supporters, the Eifler Theatre at the Clifton Center creates a splendid backdrop with Holly Stone’s scenic design.

The action plays in tightly-written vignettes that build an intricate web of personal stories that illustrate the complex web of cultural challenges and conflicts faced by both educators, students and parents at the turn of the last century — and well into the 20th, as the school continued to confront changing needs (for example, working with students with dyslexia).

The push for educational access and reform was but one in a series of disruptions affecting rural America. And the conflict between those promoting education and those who viewed it as a threat to an entire way of life was fierce. Indeed, the play suggests that area moonshiners were so threatened by a temperance pledge required of Hindman school students that, at one point, they set the school afire.

“Crossing Mountains” is honest, compassionate, even-handed — and often downright funny — in depicting those battles. And by depicting personal stories about parents sacrificing to give their children a better life, this play builds a powerful emotional arc that feels closely related to our own time.

The members of the cast are all listed as “Ensemble” and play multiple characters — characters who are identified in the dialogue. Under Kathy E.B. Ellis’ direction, they bring the characters to such vivid life that I wish they had been listed in the program. Nevertheless, Shannon Woolley Allison and Trina Fischer sparkle as foils in some key scenes. Laura Ellis is a compelling force throughout. Karole Spangler is outstanding in a number of distinctive cameo roles that add up to a remarkable acting achievement. Jennifer Thalman Kepler and Sara G. B. Canary infuse their roles with a sense of moral purpose. The production is enhanced by Typh Hainer Merwarth’s costumes and Laura Ellis’s sound design.

As the play opens, Walker (Erica McClure) is being interviewed by a couple of star-struck youngsters (Dawn Campbell and Mandi Elkins Hutchins) writing a piece for a school newspaper.

In a series of short flashbacks, we scan across Walker’s life. She earns a medical degree. She marries, divorces and fights for the right to serve the Union forces as a surgeon during the War of the Rebellion (at a time when women were restricted to nursing duties). She invents her own very distinctive approach to clothing (dress reform was one of her signature causes, and costume designer Lindsay Chamberlin makes excellent contributions here). She is captured and imprisoned as a spy by the Confederacy. Then she becomes a post-war leader in movements related to temperance, women’s rights and dress reform.

Along the way she becomes the only woman ever to be awarded the Medal of Honor.

Also, although she was born in New York, she has a Louisville connection: She served as medical director in a military prison for women that was located here.

Kathi E. B. Ellis directs McClure and an ensemble cast (including Ted Lesley and Casey Moulton) at a breakneck pace. McClure infuses Walker with a fearless, uncompromising anger that occasionally flares up as ironic humor when confronting the implacable stupidity of military bureaucrats.

As a piece of documentary theater, “I’m Wearing My Own Clothes” is a fine piece of work that brings to light a figure whose story deserves attention. Despite the presence of a couple of dozen characters (and about as many scenes), the production is clear (Jill Marie Schierbaum’s set works very nicely) and the narrative has an uncompromising loyalty to facts. Still, despite the detailed close-up view of Walker, who tells her story mostly through her own voice, she remains an elusive character. Perhaps another play — or the next iteration of this one – will reveal her in other ways.

Another LFL mainstage production that I haven’t yet seen, “Defining Infinity” looks at issues around gender and sexual orientation. The Festival continues through the end of the week.