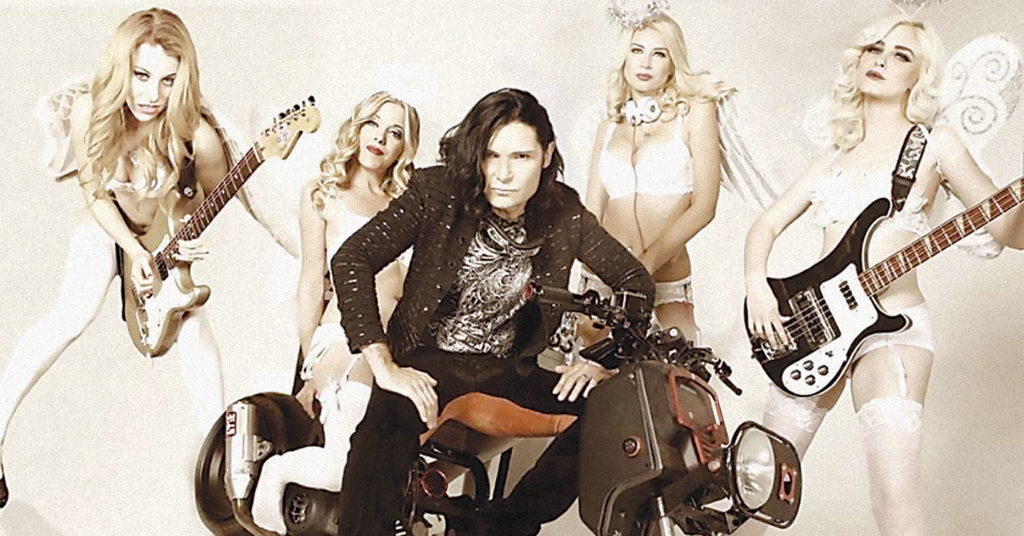 Before Corey Feldman and The Angels play Trixie’s Entertainment Complex on July 22, we caught up with the former child movie star to talk about his new record, why people are unreasonably upset with his transition into music, the dark side of Los Angeles and the Super Bowl.

LEO: So how did the show last night go?
Corey Feldman: It was great!

I’m glad that people are coming out.
We are packing them in every place we play.

I had the feeling you would. I like the record a lot. My favorite track is ‘Negativity,’ and I like ‘Duh’ quite a bit, as well.
I appreciate that. It’s a good bit tongue-in-cheek but it works.

So have people laid off a little bit with their bullshit?
That’s a good way of putting it. Yeah, I mean, listen: At the end of the day, I think we won the war when we were invited back to the ‘Today’ show. They really didn’t have anything negative to say the second time.

For the life of me, I can’t understand why anyone would be upset with what you are choosing to do. It doesn’t make any sense to me.
I’ll tell you why: It’s because there is this dark energy in the world. Of course, it’s always been there, but there seems to be an abundance of it right now and — I truly believe this — that what I’m doing has such a positive message and is such a positive force that these people who are shrouded in darkness choose to focus on negative things and that, in turn, attracts more negative energy, whereas positive things attract positive energy and I think the people who are addicted to darkness see me as a threat. They see what I am doing and imagine that I am trying to erase all of this darkness that they have worked for.

So what is your message?
Love, light and positive energy. I think that is what we need more than anything today, and we need it in abundance. It’s a very karmic wheel that we live in. It’s kind of like this: When you think of positive things all day, and you’re grateful, and you say ‘Ah, I’ve had the best day!’ and focus on those positive things, more good things happen, right?

Yeah, that doesn’t really happen to me, but I believe you.
[laughing] Oh, c’mon! You don’t mean that!

[laughing] No — everything I have ever accomplished in life has come from being 100 percent negative! Is there too much negativity in the world?
Yes! That is why there is so much lying, cynical… people hurting each other… wars… it’s the catalyst for everything.

The statistics suggest that violence is slowly disappearing from the world, but do you feel like other types of negativity are perhaps taking the place of violence?
I think so — lying, deception and mass-manipulation seem to be increasing in intensity — look at the president, for God’s sake.

[Un-printable banter about kicking certain leaders in the balls etc.] I’m not saying I’m going to do that, I’m just saying that I’d like to do that. You know, just in case anyone is listening to this conversation right now.
[laughter] Yes, you’re not going to do that. You’d just like to do it. But I think that the more overall needless regulation that is put on people creates that desire to lash out, and we can’t get it out of us.

Are there people in your personal life who would rather see you doing something else with your time?
No, I don’t think so. Not actual friends. Anyone who is an actual friend or is close to me is in the same line of thinking, because we all attract and associate people of like mind.

I just find it really annoying that so many do-nothing people feel that their opinion about what you are doing artistically is valid. If you wanted to be in movies, you’d be in movies. If you wanted to be in a sitcom, you could probably make that happen pretty easily.
The negative reaction is infectious the same way a virus is infectious. The media is always looking for a reason to put cynical, negative crap into the ether and then people pick up on that and say “Yeah! Let’s go shout negative stuff or beat somebody up!”

Have people physically threatened you?
I have gotten a death threat.

Because of your book?
I don’t know why, but it may have been my book. The media seem to all jump on the same idea on the same day. There does seem to be a dark underworld.

Do you feel like Los Angeles itself is sort of an epicenter for a hidden type of evil?
Honestly, I do.

I personally feel that way myself. I always felt that it was sort of Satan’s Center of Operations.
Let me put it in a more clear perspective: There are a lot of truly beautiful people here are doing beautiful things, and that’s why you see so much magic coming from L.A., but at the same time some of the people in control of the puppet strings… most of the time the artists aren’t even aware of what those people are like until it’s too late and they have already been sucked in. They deal in negativity that is hidden, and they drum it into your head. Look at typical TV programming and the underlying themes — look at the Super Bowl.

Absolutely horrifying.
If you really look at the messages and you really look at what is going on at a major event like that, what is it conveying except a thirst for blood? Bleeding steak on commercials and a cold beer — they slip violence in at every opportunity and it just jacks up the negative energy levels.

Undeniable. Do you think love can also be packaged in kind of an evil way?
Yes! Do you remember the Super Bowl last year when Coldplay opened, and it was this really amazingly beautiful, artistic creation? It was entrancing.

Nah, I’ve never sat through a Super Bowl.
Well, you’re smart, and I’m not a big sports fan, but watching it is a social event for myself, but the Coldplay show had synchronized four-dimensional lights, and it had this effect that just sort of locked everyone in, and the audience were given little colored cards and there was this mathematical approach to the visuals which seemed almost like four-dimensional programming going on and the message is just ‘love, love, love.’

That sounds terrifying.
And, suddenly, there is Beyonce, and she’s in black, and she’s doing this witchy thing, and she’s using words like ‘possessed,’ and there is this ear-splitting thunder.

And people are worried about what you’re out there doing!
Where are the millions of dollars being invested? They sure aren’t being spent on my little project. But it starts with Coldplay and pretty colors, and it ends in a pit of darkness, so they package love and it ends in something sinister.

I don’t get any type of sinister vibe from your show at all.
That’s because our message is love and positivity, and I don’t have a corporation behind me — we are not part of that big wheel, and I chose to stay independent for this very reason, because once you see the true darkness that lies beneath Hollywood and much of the world.

Look at what it did to your pal Corey Haim. You could see that the guy did not know what to do with the aftermath of being part of it.
He didn’t have a strong enough will, because he was raped when he was a kid.

I think if you named names that it would be a serious problem for you. I don’t know who they are, but I know that they are there, those predatory people. The signs of their existence are everywhere.
I agree. Those people are there, and they want to see people like me out of the picture. Every time we, meaning me and the Angels, put out something new, we get this immediate kick-back reaction, and it’s not coming from the fans, but the media wants you to believe that there is this widespread negative reaction to what we are doing.

I think there are some people out there who are uncomfortable with what you are doing, and think that you should be doing something else, but it’s almost like they are programmed by some other source to feel this way. You’re doing what you want to do, but people who know who you are want you to do what they want you to do, and they think they have the right to feel that way and think you should have to consider their feelings about it, and to me, that is wayyyy more fucked up.
Exactly. When I was 17 years old, and I first wanted to do music, I played Michael Jackson my song ‘What’s Up With U,’ and he said ‘Oh my God, this is brilliant and could be a No. 1 song,’ and he wanted to take it straight to CBS, but I told him not to because I wanted to do it on my own, so I shopped it around myself and every door was shut in my face and I figured it was because I was an actor, but the truth of it was that nobody was interested, because I was trying to create something that was purely positive, and they deal in negativity, so this left me with the freedom to put out my music unaltered, not factory-cut, cookie-cutter.

These people who would rather see you in cheesy Hollywood movies that you don’t believe in? Fuck those people, man.
Bless you. God bless you.

Alright dude, my phone is dying, and I’ll be at the show so we can shake hands and talk some more.
Excellent. See you then.