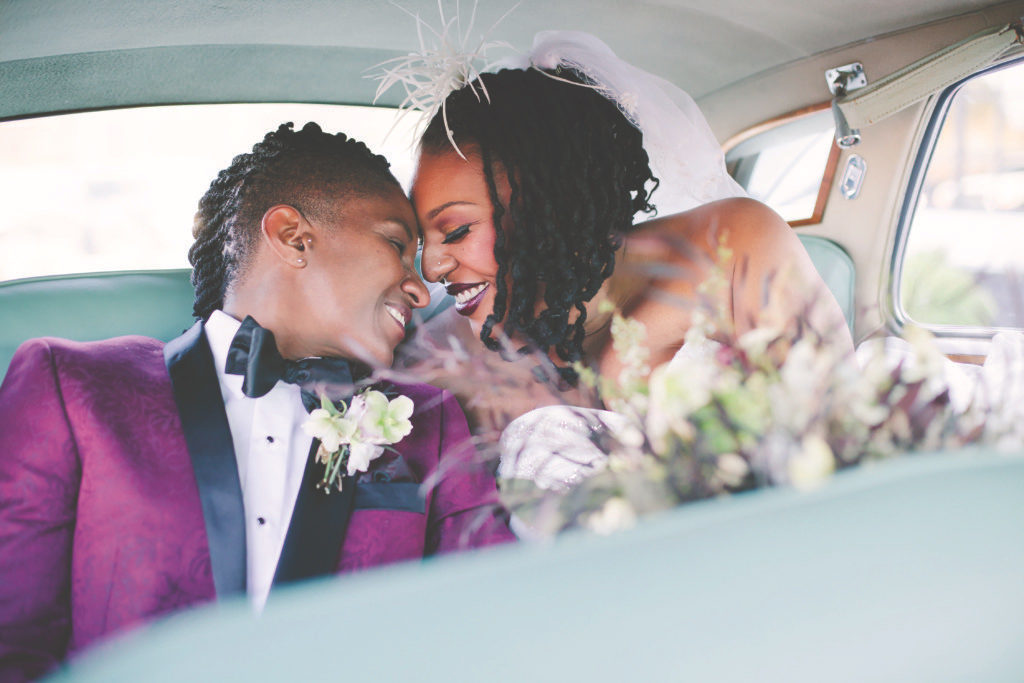 Working on this edition of the magazine was without question one of the most joyous processes I’ve had during my time with Modern. Chatting with the couples we feature in our Modern Vows spreads was not only immensely enjoyable but also tremendously inspirational. Their very different – but all equally authentic – stories of how they came to be married are real-life fairytales, and I’m absolutely overjoyed that now there is the opportunity for fair and equal happily ever afters for LGBTQ couples across the country.

“Our wedding was extremely diverse. There were about 260 attendees: young, old, straight, gay, queer, trans, black and white folks, etc. Everyone had an absolute ball with one another, dancing, laughing and cheering on me and Missy. We think it’s funny how complicated people make the concept of diversity. So many people attended from all walks of life and all shared and had fellowship with one another like it was no big deal. We both would like to see more of this within the larger world.”

“For our first dance, we did a Beyoncé and Jay-Z compilation of ‘Clique,’ ‘Diva’ and ‘Upgrade U’ with both of the wedding parties. It got all of the guests hyped and we had so much fun!”

“In May 2015 during our visit to Florence, Italy, Missy proposed to me. She got down on one knee and said: ‘The greatest feeling in the world is to be in love with someone who loves you. The universe has blessed me with love from an amazing woman. A woman who has taught me so many things I didn’t know about myself. A woman who loves me unconditionally. A woman who feeds my mind and my soul. A woman who taught me how to live unapologetically. A woman who supports everything that I do. The moment I started this journey of love with you I knew you were the one. I want you to be my one and only. I have decided there is no better or more romantic place than Italy to ask the woman of my dreams to marry me. That woman is you. Will you marry me Kaila Adia Story?’”

“Now that the new administration is slowly but surely attempting to chip away the many strides that the Obama administration made, us being married – and now new homeowners – has all become so much more significant!”

“I think the real beauty of our wedding was that it was a community event. Our friends and family – and strangers – weren’t invited to come watch two people get married but to participate in every aspect, like they do in our lives on a daily basis. Except in costume. People really brought their A-game.”

“So many things stick out about our wedding, surrounded by all that love and color and creativity – I think I sobbed the whole time – but just the fact that after 16 years together we could legally in Kentucky – and in the street downtown no less – stand up high professing our love and get married. I know neither one of us really thought we would live to see the day.”

“I was really overwhelmed from the moment we pulled in. My siblings bought us a tandem bike that we rode to the wedding, and I will never forget how overwhelmed I was rounding the corner and seeing New Orleans in my backyard and my entire family, friends from all over the country, everyone having a great time and looking amazing. It was truly magical from start to finish.”

“I think the state of the country feels so different now than just a year and a half ago and not for the better. I am not sure we could’ve done what we did so publicly today under this administration. The world seems so crazy, but I believe we need it now more than ever. Maybe a big ol’ gay costume parade down the street celebrating love should happen again this year.”

“It does bring a sigh of relief and allows us to sleep a little easier knowing we are married now, especially because we plan on having children soon. But given the current political climate, there are still many concerns. Luckily, we live in a place like Louisville that recognizes the strength in diversity of families.”

“We tried to incorporate elements of both of our heritages/families into our reception. Jessica and her family, as well as my mother’s side, are from Eastern Kentucky/Appalachia. My father is from Iran. Our reception was held in a barn and our dance floor was a large Persian rug. One of my favorite memories from the evening was all of our friends dancing to Persian music on a Persian rug in an old Kentucky barn.”

“Walking down the aisle to my soon-to-be wife will be the best memory from our wedding day. My dress and her tux were a secret to one another, and the memory of my first glance at Natalie wearing that navy tux continues to make my heart drop. The weather that day couldn’t have been any better. The sun shining down on the rolling Kentucky hills behind us as we said our vows will forever take my breath away. It was a perfect day.”

“We have been together since 2005 and have always known we would get married one day. But it was very important to us to be able to get married in our home state. In June 2015 that became possible. I proposed in December – and only because it took a few months to plan the proposal.”

­— quotes by Jessica and Natalie Colliersmith

“Making many of the decisions for the event proved complicated. Unlike others who might have dreamed for years about how their perfect wedding day would be, we had to get our head wrapped around the fact that after nine years as a couple, we could actually get married and what our vision for the day would be.”

“Everything went as we imagined. Chris’ vision was that it would be a memorable party for friends and family that just happened to have a wedding ceremony. Our guests had fun, and also very important, we had fun. We wanted it to be an offbeat, simple evening uniting us as a couple but also uniting our friends and family from across the street and around the world. Our backyard was the perfect venue for it.”

“We had planned the entire evening to be outdoors in our backyard, but the weather forecast had predicted storms to pass through Louisville right at the time of the ceremony. Rather than going the safe route with tents, our close friends bought some clear umbrellas and brought them that day. Typical of Kentucky weather, it only sprinkled for 10 minutes. Still, everyone enjoyed pulling out the umbrellas and taking advantage of the photo ops they provided.”

“We are distressed by the recent political developments in the country. The obsolete and discriminatory social policies defended by this administration and the subsequent inhumane treatment of minorities, especially refugees, are particularly disheartening. We were ready to get married in a rush in case the political environment turned against fairness and equality. Thankfully, that hasn’t been the case for us thus far, and we were able to keep the date we chose for our ceremony.”

“Neither one of us adhere to traditional gender roles; who we are does not fit in boxes. I have been working to unpack rigid gender roles, dismantle sexism and end violence against women and girls all of my professional career. … I believe that the right for ALL of us to be safe to love – marry or not – regardless of immigration status, gender identity and sexuality, is more precious than ever. Our wedding celebrated our values – for one day, we were part of the world we want to live in.”

“Best quote of the afternoon: ‘This is the most queer traditional wedding that I have ever been to.’”

“[Some of the most memorable moments were] Cary crying the first time he saw me come toward him at the altar and me stopping to take it all in before continuing to walk, and the Godparents of the wedding – a Latin American tradition – putting large scarf on our shoulders promising to support us in our marriage.”

“We made time to enjoy the day, the people and each other. We had fun and our guests had fun – it was a mix of romantic, playful and meaningful. … We savored every moment.”

“I picked out my wedding dress two months after I met Cary, but he did not realize he was going to marry me until much later in our relationship.”