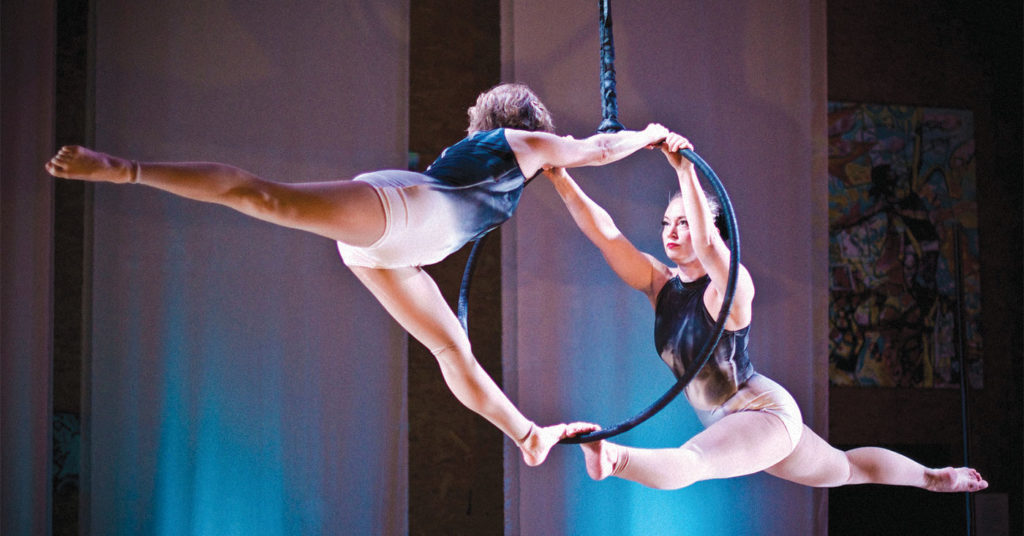 Picture a tall ship, square-rigged with all the customary lines and fittings. Now, in your mind’s eye, replace the ropes and spars with aerial hoops, trapezes, cubes and brightly-colored lengths of dangling silk.

What you’ve just imagined is what you’ll see in the flesh when you step into Suspend, which describes itself as a movement studio dedicated exclusively to aerial arts and cirque fitness (the studio offers a full range of instruction and coaching). In this studio, the act of standing on the ground seems a bit retro. Overhead, people are joyfully dangling, spinning and coiling like pretzels — and, despite the obvious rigors involved, when I visited last weekend to watch a troupe of aerialist-actors rehearsing this weekend’s premier of a new play, “Orpheus: A Silent Circus,” it all seemed effortlessly weightless.

The ancient connections among theater, dance and circus arts are obscure — but in modern times, the idea of employing circus-like techniques to create narrative theater dates back some 40 years. And it’s worth noting that just as traditional circuses, such as the Ringling Bros. and Barnum & Bailey are fading away (the final Ringling Bros. performance takes place later this month), theatrical circus (with Cirque du Soleil at the forefront) have become cultural phenomena.

“Orpheus: A Silent Circus” was written and conceived by Eli Keel (a contributor to LEO). The production’s creative team includes three faculty members from Suspend. Amberly Simpson is head choreographer (she also plays multiple roles in the play). Anne Bock Miller, a Suspend co-owner, is assistant choreographer (she also plays multiple roles). And Meg Johnson Wallace, another Suspend co-owner, is a producer. Gil Reyes (cofounder and co-artistic director of Theatre [502]), directs the production.

Keel first collaborated with Suspend last fall on a production called “A Tale of Love and Tarot.” That production, by all accounts, a successful proof-of-concept experiment, was steeped in the stylized imagery of fortune-telling playing cards. This production, said Keel, draws its visual inspiration from the world of silent film, with visual references that call to mind Charlie Chaplin’s waifs and the sinister feel of the 1920 German expressionist film “The Cabinet of Dr. Caligari.”

Based on the myth of Orpheus and Eurydice, the play comes to life in a chilly, silent-movie landscape and features a passionate love affair with a tragic arc that plunges into the surreal underworld depths. The musical score invokes late 19th- and early 20th-century soundscapes, with selections that include Rachmaninoff, Prokofiev, Joplin and Gershwin. And the 1920s movie-hall aesthetic is established through the use of organ music and title cards.

As I watched Reyes and Simpson work with the performing troupe, what struck me most strongly was the intense blend of expressive acting and acrobatic gesture — both on the ground and in the air.

This sort of theater owes much to dance. Emotion is conveyed through motion, through posture, movement and facial expression. But as with, say, 3D chess, the choreography is exponentially more intricate than, say, blocking dancers and actors who are gravity-bound to the floor. One scene finds Amberly Simpson and Anne Bock Miller (who respectively play Hades and Phobos in the underworld scenes, doctor and nurse in the earthly scenes) in an aerial cube that spins like a centrifuge as they perform an aerial pas de deux. At other times, the troupe creates vertical tableaus that are simply unimaginable in any other context.

And yet, even in the midst of what seemed to me wildly frenetic physical action, the cast — including Tabitha Johnson (Orpheus) and Braden McCampbell (Eurydice) — seemed totally focused on character and affect.

During a break, Reyes commented that working with aerial actors is quite different from working with more traditional casts. For instance, Reyes said that when working with actors who build their characters from the inside out, discussions about how to play a scene often focus on the character’s inner psychological or emotional world — and action flows from motivation. In contrast, working with performers whose art is rooted in physical motion requires not only a discussion of the character’s “motivation,” but a kind of emotional choreography that very clearly ties the inner world to physical motion.

And based on what I witnessed last weekend, absent the theatrical trappings of costumes, lighting, make-up, etc., seems to be exactly what this troupe is accomplishing. Theatrical storytelling works best when craft, apparatus and technique fade into the background and all we care about as an audience is the story we’re witnessing on stage.

In this production, the various pieces of apparatus — the intricate systems of pulleys, cables, hinges and fabrics — are intrinsically interesting. But I’m looking forward to seeing this production because I think this troupe is capable of some great storytelling.