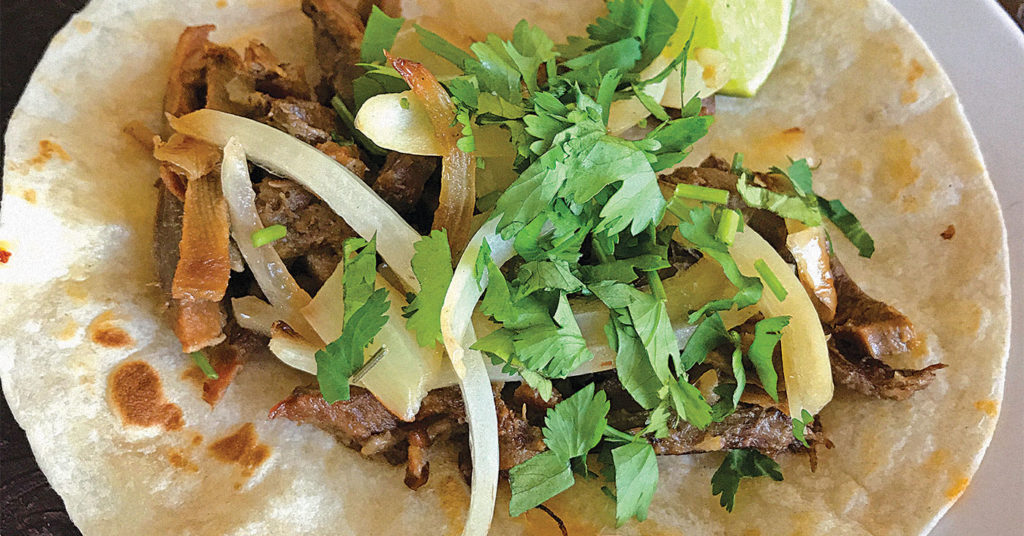 Is there any culture, anywhere, that does not delight in the joys of wrapping carbohydrates around protein or vegetables and eating it out of hand? From the humble sandwich to empanada, kreplach, pita and Asian bao, among many more, I can’t think of any cuisine that doesn’t boast some kind of portable meal like this.

Tacos have become so familiar north of the border that they seem just as all-American as, well, pizza or gyros. But some of the taco’s heftier cousins might still need an introduction. The arepa, for example, the iconic dish of Colombia and Venezuela; the pupusa of El Salvador and Honduras; and then there’s Mexico’s lovable gordita, which translates roughly as “the little chubby one.”

All three of these goodies are similar: Cornmeal, or masa dough, is patted into a thick round, cooked on a hot skillet or griddle until it browns and puffs up and then it is split to make room for a variety of delicious fillings. We’ve met the arepa recently at Nahyla’s Restaurant (LEO Weekly, March 1), and filled up on pupusas at La Guanaquita Restaurante (Sept. 22, 2016).

This week, it’s time to reacquaint ourselves with the gordita at an old favorite made new again: Las Gorditas, which has operated a popular food trailer in front of the Eastland Shopping Center on Bardstown Road for the past 10 years or so, has launched a full-service, bricks-and-mortar shop — also called Las Gorditas — a mile or so down the road in Fern Creek.

Fans of the Las Gorditas trailer will be pleased to know that it will continue in operation at Eastland on its usual Friday-through-Monday evening schedule. The new shop, however, stands prepared to serve your gordita needs — and other Mexican dishes, too — for lunch and dinner every day but Monday.

It takes a lot of work to run a restaurant and food trailer with a small crew, said owner Pat Costas, who runs Las Gorditas with his wife, Esperanza, and her sister, Ofelia Ortiz. But he said their growing fan base has been begging them to do it. (He also said they’re looking hard for more good help. Looking for a job in the restaurant business with friendly folks? Give Pat a shout at the contact info at the end.)

The small building was recently occupied by Marric’s, which has quit restaurant service but continues catering-only from a new location; and before that, the Fish Inn. It seats about 50 in two rooms that are now decked out in bright adobe colors and a few serape-and-sombrero decorations here and there, with sturdy undraped tables and heavy side chairs.

The menu includes about a dozen street-food choices similar to the trailer’s bill of fare, including tacos, sopes, quesadillas, the eponymous gorditas and more, ranging from $1.90 (for a single taco on a corn tortilla) to $7.75 (for some of the more-loaded tortas, Mexican sandwiches). Gorditas are $3 each, and they’re hearty enough that you don’t need many to fill up. Nine larger entrées are $6.99 (for a three-tamale plate) to $12.99 (for a grilled steak plate, or carne asada, with rice and beans). A weekend menu, available Saturdays and Sundays, adds menudo ($6.99 small, $10.99 large) and caldo de cameron, shrimp soup ($7.99 and $11.99).

Salsa with crisp, addictive house-fried chips is $1.99, and a half-dozen other appetizers are $2.50 (for a small cheese dip) to $4.99 (for bean or chorizo dip or large guacamole).

A small order of guacamole ($2.99) was a bit idiosyncratic: Cubes of avocado and chopped tomato were tossed in mayonnaise with enough hot pepper to make it distinctly spicy, and served with thick, crunchy house-fried tortilla chips.

The tamale plate ($6.99) offers your choice of chicken or pork or a little of each. We went with two chicken and one pork and were happy with both, although they seemed a little dry, an issue that hot, red salsa and hotter green salsa easily put right. These didn’t come in the traditional corn husks but were served bare nekkid, unwrapped in the kitchen. No matter, you don’t eat the husk. The chicken and pork were finely shredded and loaded into the tamales with very spicy, minced hot green chiles.

Enchiladas de papa ($10.99), a veggie enchilada filled with potatoes, carrots and cheese, topped with red chile sauce and a heavy blanket of finely chopped lettuce and squirts of mild crema, was tasty enough but very mild, prompting another reach for the squeeze-bottle salsas. Creamy, rich cheese-topped frijoles and well-made Mexican rice came with both entrées.

A lengua (shredded beef tongue) taco on a flour tortilla ($2.20) was served Mexican-style, open-face and dressed with onions and cilantro. It was serviceable, although the tongue was surprisingly mild. A gordita ($3) was golden brown; crisp, flaky and short, just as good as ever.