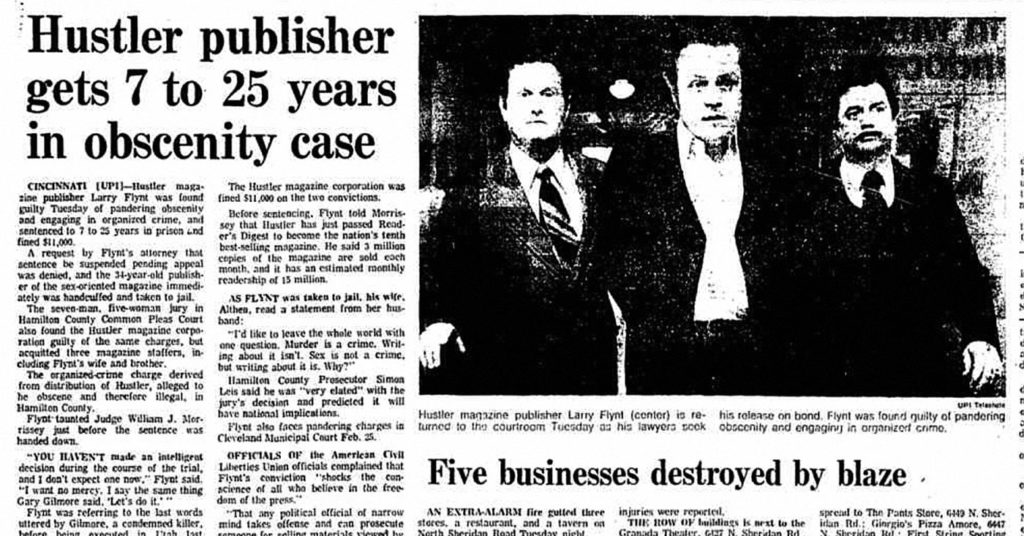 Flynt served six days of a 7-to-25-year sentence fro the 1977 conviction before being released pending appeal. The conviction was overturned in 1979

Larry Flynt and Hustler magazine will be forever linked to the First Amendment, though perhaps not for the reasons that most people think. In popular culture, Flynt is likely most famous for his 1977 conviction for dissemination of obscenity, which reached the Supreme Court, was rejected on a technicality and was the subject of a major motion picture: “The People vs. Larry Flynt.”

Yet Flynt’s largest legal impact has been in other areas of First Amendment jurisprudence.

For example, Flynt has been involved in multiple lawsuits surrounding defamation claims by political or legal figures whom he has satirized in his magazine. Those cases help shaped defamation laws for public and semi-public figures, making it more difficult for those types of figures to sue for defamation in the future. Hustler magazine was also involved in an incitement case after an adolescent boy accidentally committed suicide while trying autoerotic asphyxiation after reading an article about it in Hustler. The incitement claim failed. Flynt also won a case brought by the U.S. Postal Service because he was mailing his magazines (unsolicited) to members of Congress. A federal trial court held that congressional offices must accept mail from constituents, even pornographic magazines.

Still, the area where Flynt has run afoul of the law most often is under obscenity laws, which criminalize the distribution of materials, including magazines, that are deemed obscene.

But just what is “obscenity”?

To average people, obscenity could be synonymous with pornography or other sexually explicit materials. To lawyers and First Amendment scholars, however, whether something is legally “obscene” is a key question, and the answer is not at all obvious. Indeed, “obscenity” under the law has an unexpectedly specific definition and not all sexually-explicit material fits into that definition. How we got to that definition encompasses a winding road of Supreme Court cases stretching back to the 1950s.

In 1957, in Roth v. United States, the Supreme Court defined obscenity as “material which deals with sex in a manner appealing to prurient interests” and then denied such material First Amendment protection. Roth also held that the standard for obscenity was “whether to the average person, applying contemporary community standards,” would find that “the dominant theme of the material taken as a whole appeals to prurient interests.”

According to Merriam Webster, “prurient” means “marked by or arousing an immoderate or unwholesome interest or desire” or “marked by, arousing, or appealing to sexual desire.” So, according to Roth obscenity is any material that, based on the average person’s understanding of community standards, has a dominant theme that appeals to sexual desire in an unwholesome way. The defendants in Roth both sold sexually explicit books and magazines, and used circulars and other advertising to solicit sales. Their convictions were upheld.

Seven years later, in the 1964 case Jacobellis v. Ohio, the manager of a movie theater was convicted under an obscenity law for showing a French move, “Les Amants.” The Supreme Court amended the Roth standard by adding another requirement for obscenity: that it is “utterly without redeeming social importance.” The Supreme Court also altered the standard to a national one, not a local one, so that the standards for what is “obscene” would change with times, not with geography. The Supreme Court failed to reach a full majority in Jacobellis, showing how divided the court was on obscenity standards, and weakening the precedential value of the case.

However, perhaps the most notable (and quotable) part of the case was the concurring opinion of Justice Potter Stewart, who stated that he could not really define obscenity but “I know it when I see it.” That statement nicely captured the Supreme Court’s difficulties in trying to understand the difference between unacceptable obscenity and acceptable pornography.

For several years, the Supreme Court continued to wrestle with what the standard for obscenity should be. The Court’s struggles led to some unexpected, and pretty hilarious situations. Most notably, in the book, “The Brethren,” the authors described that, in the late 1960s and early 1970s, the justices who believed that obscenity had to be determined on a case-by-case basis would actually watch the movies being disputed. The image of a regular pornographic movie day for Supreme Court justices strikes me as delightfully absurd, especially when you add the image (also described in “The Brethren”) of elderly and nearly-blind Justice John Marshall Harlan II sitting in the front row and having a clerk or another justice describe to him what was happening on screen.

But the fun had to end eventually.

And it did in 1973 with Miller v. California where the Supreme Court created a three-part test for obscenity. Miller defines obscenity as 1) whether “the average person, applying contemporary community standards would find that the work, taken as a whole, appeals to the prurient interest,” 2) “whether the work depicts or describes, in a patently offensive way, sexual conduct specifically defined by the applicable state law,” and 3) whether the work, taken as a whole, lacks serious literary, artistic, political or scientific value. The Miller test builds off the test outlined in Roth and rejects the “utterly without redeeming social value” requirement of Jacobellis. Also rejected was any sense of a “national” as opposed to a “local community” standard.

Miller seems to have stabilized obscenity law; there have been no further Supreme Court refinements to the test. And the Miller test is what Flynt has been fighting his entire career.

Naturally, Flynt has some serious criticisms of Miller, most notably its reliance on community standards. According to a 2000 interview, Flynt has predicted that the Miller test cannot stand because a local community standard is too unpredictable, particularly for filmmakers or publishers who seek to publish nationally or internationally. According to Flynt, Miller requires “filmmakers in San Francisco or Los Angeles or in New York to second-guess what viewing habits are in Biloxi, Mississippi. It’s just the most ridiculous thing you can think of.”

The internet complicates the issue even further because the content is sent directly to the viewer, with little to no chance that it could be observed by third parties. The directness of the transaction, according to one producer, creates in the pornography viewer a “community of one” and, clearly, the viewer does not object to the content of the material they ordered.

This leads to another point. The good part of the Miller test’s community standards, at least as far as Flynt and other pornographers are concerned, is that communities may be becoming more accepting of pornography. Even as prosecutors have continued to bring cases, Flynt and others like him sometimes win those cases.

Flynt was first convicted by a jury of obscenity charges in 1977 in Cincinnati, Ohio. In 1999, he pled guilty to obscenity charges, again in Cincinnati, but this time the sale was to a minor. Also in the 1990s, juries showed themselves willing to acquit artists of obscenity charges. An exhibit of sexually explicit photographs at the Cincinnati Contemporary Arts Center was found by a jury to not be obscene, as were the lyrics of the rap group 2 Live Crew. Moreover, since the 1990s, obscenity prosecutions, at least on the federal level, have become very rare as prosecutors have focused more on child pornography and other offenses that they deem to be a higher priority.

The public’s relationship with pornography continues to be conflicted, however. Recent surveys have shown that most men and at least a third of women watch pornography on a regular basis, and internet pornography is particularly popular. However, a majority of these same people reported that they believe that watching pornography is morally wrong and pornography should be legally regulated. Accordingly, despite pornography’s popularity, communities may still want it prosecuted under obscenity laws. Moreover, with Attorney General Jeff Sessions saying he would “vigorously prosecute” obscenity laws and would consider reviving the Department of Justice’s Obscenity Prosecution Task Force, the future of obscenity laws, and the communities who define obscenity for First Amendment purposes, is far from certain. •

Dr. JoAnne Sweeny is an associate professor of law at UofL.