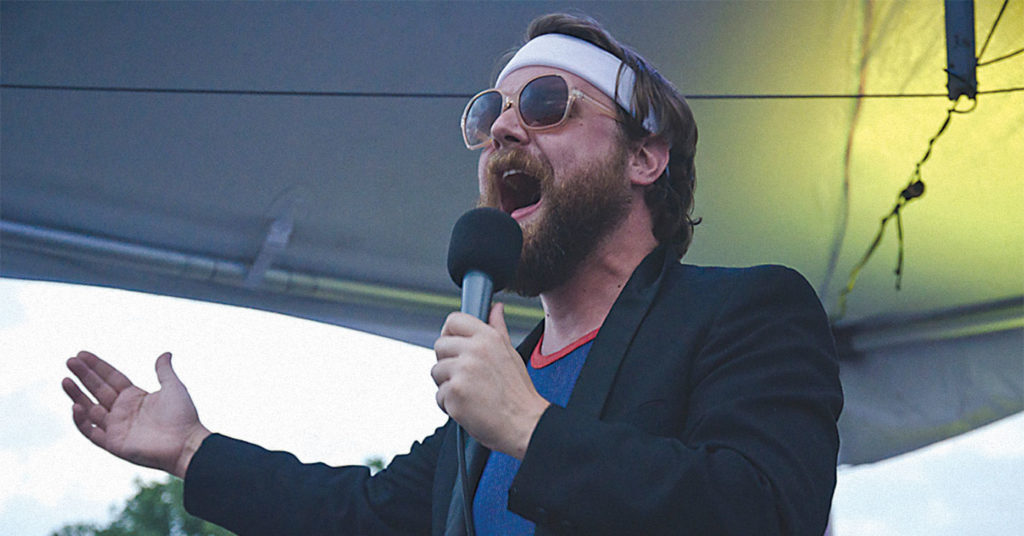 Howell Dawdy, Alex Smith’s satirical, rap alter ego who’s starting to expand to rock and country, has always reminded me of less-political Stephen Colbert. They share an approach that pairs witty, goofy humor with sharp, observational depth. The second Howell Dawdy record, I’m Done, is set to be released this Friday via a show at Kaiju. But, first, we caught up with Smith to talk about four of the album’s songs.

LEO: The opening song, ‘I’m Done,’ reminds me of ‘Fire Extinguisher’ in a way, in terms of how it’s a sharp, satirical, whimsical and dark song. Can you dig into this song a little bit? And, I know you’re big into Twitter. When you write observational songs like this, does social media have any influence?

Alex Smith: I get what you’re saying in the connection between ‘I’m Done’ and ‘Fire Extinguisher.’ I think they are similar songs. There’s kind of an unstated frustration in ‘Fire Extinguisher’ that’s behind all of it. And ‘I’m Done’ is really just an anthem in celebration of giving up. ‘I’m Done’ definitely came from a feeling that a lot of people have right now — that there’s just a whole lot of overwhelming stuff going on all of the time. And, yeah, social media is a part of that. And just how fast news is, and how much documentation of everything that is going on in the world there is constantly. I don’t know if the idea for the song is directly a result of that, but it’s definitely inspired by that. Really, I just thought it would be cool to have a big, aggressive anthem, the gist of which is ‘I don’t feel like doing anything ever again.’ For a guy who’s kind of lazy, despite producing a lot of my own music and making a lot of videos and things like that, deep down, I would really like to just not do anything. That’s really where my soul is. Perhaps I’m yelling at myself here, for spending so much time for working on the songs on this record, and making fun of myself for thinking that I’m finished with any of these songs, when I’m just going to perform them, and write more songs.

‘Rap N Rock,’ which seems like an attack on radio country songs, almost made me spit out my coffee laughing yesterday with lines like ‘We’re cruising Reditt gone wild for some tush, yeah, that’s right.’ It’s an interesting direction to take Howell in, and mocking pop country comes up again on this record.

It’s absolutely inspired by the product placement you hear on the radio. It’s pretty hard to miss, if you turn on corporate pop country stations. Keith Urban has a song where he calls himself a Pepsi cola. Brad Paisley has a song that’s basically just a big Bud Light commercial. I have a real love of that. It entertains me a lot. I find it very funny, that so-called country — music, that, at least on some level is supposed to be for the people of rural America — is really just this long ad of specific products that are tied in to your identity in all these different ways.

‘Hot Air Balloon’ is about fighting someone in a hot air balloon. It seems like you use Howell to both dig into serious things in a way, but also, like here, just run with something fun. Could you talk a little bit about that dynamic of how you use Howell?

If you’re crediting me with any sort of social commentary or things like that, it’s got to come pretty fast and has to make sense to me almost immediately to want to work on it. It’s almost the same process for any of these songs. If we’re going back to ‘Fire Extinguisher,’ an idea for a laundry list of random things, that concept just came to me all at once. It’s not that different to write that, and then to have the idea that it would be funny to write about this goofy guy trying to get someone to fight him in an awkwardly close space that’s floating up in the sky. As long as the concept makes sense to me overall, then I just dig in, and at that point I try to make it as good as I can. I think there are funny, sharp lines in this song, as well. I love the sort of observational side of writing things, and I love the really, really absurd stuff. I wish I had more of the absurd stuff, because I love songs that are in their own world, and they don’t tell you that much, and they don’t have a list of jokes. In some ways, that’s more of the goal for me, to have these individual little worlds for each song.

What is the concept of ‘Beautiful Love?’

I can’t really explain it, because it is about love, and how great love is, and I guess I elevated it by pretending I’m some rich guy, and saying I don’t need any of this stuff. And, it’s this kind of this elaborate, overblown song with a huge guitar solo in it. It’s this big, extravagant song about how love is more important than extravagance.