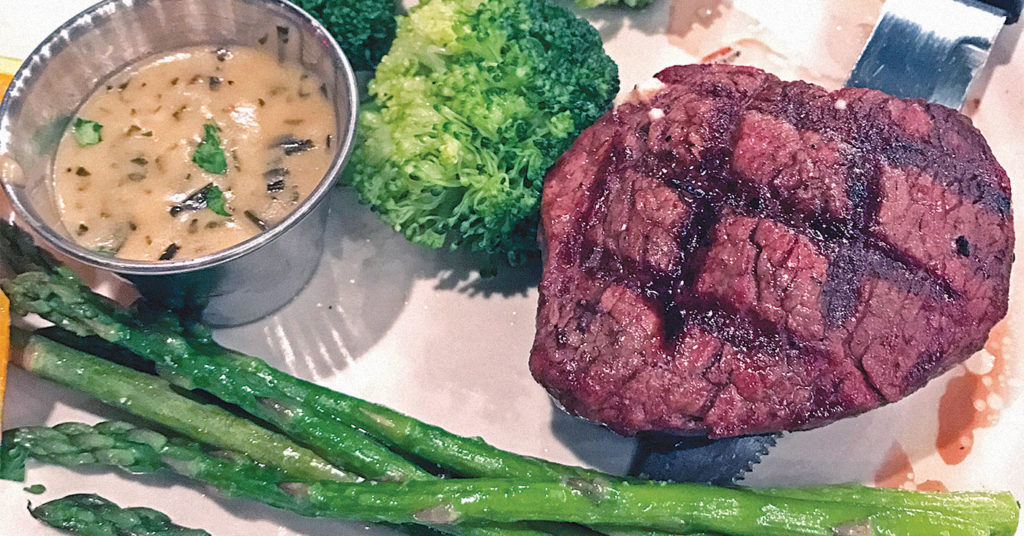 My first thought upon this realization was negatory: Nah. Let’s face it, I don’t like what we describe as American food as much as I do food from other countries, which I love for spice, aromatics and excitement. It’s no secret that I love food from other lands so hard.

But all this is good reason for a recalibration, and one fine place to go for such a gastronomic reboot is The Blackstone Grille in Prospect, where genial restaurateurs Rick and Cathy Dissell have settled in for close to a decade now.

They’ve developed a loyal following through several East End iterations since the 1980s, and I’m pretty sure that a lot of folks who enjoyed the initial Rick’s in Chenoweth Square and all its successors are still showing up at this Prospect Point dining room. Heck, I’m one of them.

Like all its predecessors, The Blackstone Grille is comfortable, upscale in mood, but not at all stuffy, an amiable environment with simple decor in a dark room with well-lighted tables, a sociable bar and comfortable dining room. Undraped wooden tables are furnished with heavy side chairs and set with quality flatware rolled in soft white cloth napkins.

Blackstone is open for dinner only, daily except Sunday, and its American-style menu doesn’t contain much that would surprise a Louisville-based Marty McFly, zapped forward from the city’s culinary past, save perhaps for its estimable use of Kentucky Proud meats and produce, sourced largely from regional farms. Not that there’s anything wrong with that.

More than a dozen entrées and pasta plates — many available in your choice of large or small sizes — range from $13 (for a small order of light fried chicken made with “hormone-free, all natural boneless-skinless breasts”) to $34 (for three steaks: center-cut fillet or USDA Prime New York strip or rib eye). A half-dozen sandwiches are $11 (for fried cod, grilled chicken or a cheeseburger) to $18 (for a trio of “The Prospector” sliders). Appetizers range from $4 (for a short order of potato skins filled with Kentucky country ham and cheese) to $15 (for a fried oyster platter).

Blackstone’s wine and beer lists aren’t overly long and feature, mostly, popular bottles, and the full bar offers well-fashioned standard cocktails without fancy mixology. I was happy with a generously portioned Blackstone Manhattan ($9.95), served on the rocks, as my dinner beverage.

Dinners begin with bowls of fine, warm, fluffy yeast dinner rolls with scoops of whipped butter, just like my Mom used to make, and yours probably did, too.

Fried green tomatoes ($7) were extremely good, a near competitor with Goose Creek Diner’s for best-in-town honors. Three large, thick, tangy rounds were cloaked in a crisp, textured breading fried dark golden-brown and grease-free and served piping hot, with a tasty, thick, pale-orange red-pepper mayo for dipping. They were plated on almost-enough mixed salad lettuce to declare it a small salad.

The regular dinner salad was pretty standard, mixed lettuces that had been carefully picked over, chilled, not wilted, with sliced sweet onion, a few tasty garbanzos and fresh, crisp croûtons. A small dish of thin, blue cheese dressing with no obvious chunks of cheese didn’t bring much extra flavor to the party.

Center-cut fillet with Bearnaise sauce ($28 for the smaller six-ounce option) was a flavorful round of Kentucky Proud beef, close to an inch thick in spite of its smallish size, neatly crisscrossed with dark grill marks and served close to medium-rare as ordered, dark and crisp on the outside, pink in the middle. A real complainer might have called for it to be pulled from the grill and hustled out a little more briskly, before heat overrun took it on toward less-than-juicy medium. That’s awfully picky though, as the steak was very good.

My father used to say that a good steak requires no sauce, and he may have been right. The small, metal crock of Béarnaise that came with the steak was properly made in the style of this classic French sauce, but its tangy, buttery, herbal flavors weren’t needed with this fine local beef and, mostly, went unfinished. The melted butter on the fresh, crisply undercooked asparagus spears and broccoli florets on the plate worked even better with the steak.

Blackstone’s bill of fare offers little for vegetarian or vegan diners, but the kitchen is accommodating, and will gladly pull the shrimp, scallops, lobster and crab from the seafood pasta dish ($19 small, $24 large), leaving a savory blend of spinach, sun-dried and fresh tomatoes with shallots, scallions and garlic in a rich olive oil-and-white wine sauce over linguine.