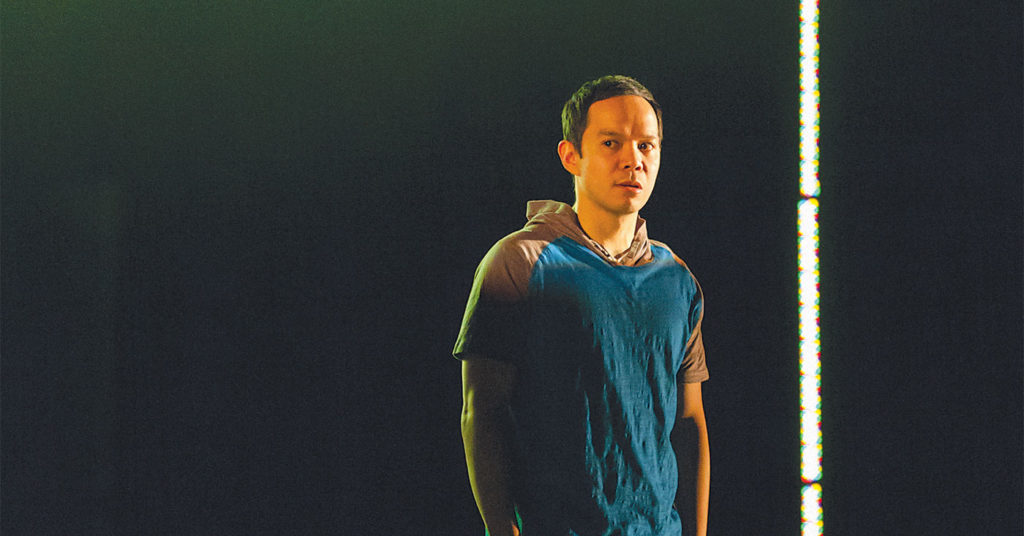 So begins “Recent Alien Abductions,” by Jorge Ignacio Cortiñas, which opened Sunday, as part of the Actors Theatre of Louisville Humana Festival of New American Plays.

It is an extraordinary play. Cortiñas has crafted arguably the most intricately-detailed script to appear on a Humana bill in years. On the stage, under Les Waters’ clear, unaffected direction, it’s easily appreciated and digested by an audience in the moment. But I suspect that only repeated viewings (or an actual script in hand) would be necessary to fully appreciate the elegant rigor of the storytelling.

The speaker is a young Puerto Rican named Álvaro (Jon Norman Schneider), who proceeds to deliver an epic monologue that examines “Little Green Men,” the first episode of the series’ second season, in forensic detail.

It’s the sort of monologue you might expect to hear on an episode of “The Moth Radio Hour,” full of details, digressions, laugh lines and hints that perhaps we’re not dealing with a fully-reliable narrator. At a guess, I’d say the opening monologue runs more than 15 minutes — and its interest never flags. Álvaro recounts the plot — which plays out in Puerto Rico. He reveals his astonishment that the main Puerto Rican character — a young man befriended by Fox Mulder — shares his own given name. He reveals sloppy lapses in the program’s portrayal of Puerto Rico and Puerto Ricans, and takes time to discuss the Puerto Rican independence movement. Time after time, he stops to pose questions that hint of a complex conspiracy.

Schneider’s performance is quietly riveting. He’s like a nervous child whistling in the dark, his eyes darting side to side. But despite — or perhaps because of — his tics, there’s an eerie conviction to his tale.

As he parses the episode, he also reveals aspects of his family life. And we learn that his older brother Néstor, after watching but a single episode of the “X-Files,” declared that Mulder and Scully would never connect romantically because, “People only fall in love with those they don’t trust.”

As we come to learn, if Néstor’s maxim is true, Álvaro should love pretty much everyone — and perhaps everyone should love Álvaro.

The action leaps forward 23 years to a bright home in present-day Puerto Rico (its intricacies cunningly designed by Dane Laffrey). Patria (Ronete Levenson), a stern-looking, young woman, has come to negotiate with Álvaro’s family for permission to publish a collection of his stories, most of which, it seems, blend sci-fi analyses with stories and revelations about the family. Patria’s quest faces obdurate objections from Néstor (Bobby Plasencia), a rage-prone man in search of a pit bull bred for dogfighting.

Néstor’s wife Ana (Eli Monte-Brown) is a marginalized woman in a macho household — but she’s far more clever than her simmering husband. Néstor and Álvaro’s mother Olga (Mia Katigbak) is on the cusp of dementia. But whether lucid or not, Olga spends most of her time querulously proclaiming that something — perhaps her incontinence, perhaps something deeper — is not her fault.

And there is long-time family friend Beba (Carmen M. Herlihy). She is Patria’s only ally in the battle over publication — and more importantly, after a stylized but chilling battle between Néstor and Patria (fight choreography by Ryan Bourque), she holds the key to understanding Álvaro and his family.

And as she unlocks that door, Álvaro returns to the foot of the stage. Behind him, his family home is bathed in a surreal light (lighting design by Brian H. Scott), and we hear a spaceship-like hum (sound design by Christian Frederickson) as he interacts — always in third person — with his “alien mother” and “alien brother” (costume design by Jessica Pabst). The scene is a dark revelation that untangles the knotty weave of Álvaro’s narrative.

George Bernard Shaw wrote that “the typical Ibsen play is one in which the leading lady is an unwomanly woman and the villain, an idealist.” From Shaw, that was praise. He admired Henrik Ibsen’s revolutionary spirit.

But Shaw was the exception. In 1879, when it premiered, there was enormous hostility to Ibsen’s “A Doll House” and its depiction of a woman so determined to pursue her independent destiny, that she’s willing to leave her husband and children. Actresses refused to play the woman’s role. Theaters refused to mount productions of the play.

In response, Ibsen wrote an alternative “happy” ending. The Chamber Theatre’s program note for its production of Henrik Ibsen’s “A Doll’s House” says that the play’s U.S. premiere took place in Louisville in 1883. That production (with the alternative ending) ran under the title “Thora” and featured the international star Helene Modjeska in the role better known as Nora.

“A Doll’s House” was a radical play in 1879. And it’s a radical play now. Ibsen himself, and some critics over the years, have asserted that the play was not about women’s rights but about human liberty. Be that as it may, it is indisputable that in this century, one’s liberty and choices are still profoundly affected by gender. Indeed, the backlash against women’s liberties is especially strong at this moment.

The Chamber Theatre’s production at Vault1031 (with a text translated by William Archer and adapted, and directed, by Martin French) is brisk, clear and convincing. Polina Shafran’s sharply-drawn portrayal of Nora reveals the ironies that undermine the infantilizing treatment she receives from her husband Torvald (Brian Hinds). Ibsen’s generous compassion eventually surfaces in Gerry Rose’s approach to the sinister Krogstad. Beth Tantanella’s Mrs. Linde is a resourceful modern woman. Joe Monroe is a delight as Nora’s would-be admirer Dr. Rank. And Jay Marie Padilla, who is showing up in all sorts of acting and directing roles, brings a satisfying sense of purpose to the role of Maria. Costumes by Carol Dines and the clever minimalist set design (uncredited) are well-suited to the production. On Thursday, March 23, after the show, a group of area attorneys will conduct a mock trial of Nora.