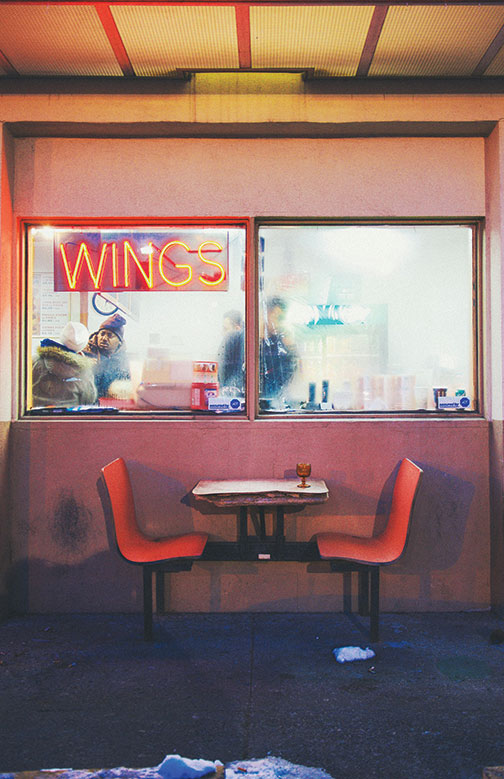 “Elaine.” My eyebrows shot up in surprise. Your typical cattle-call auditions were just breaking big rocks into smaller ones, striving to be great at making failure look good; but this was new — no one had ever used my name at one of these before. “Give us the line again, with a little more holiday.”

I looked into the camera and declared, “O, that’s happening!”

I took a deep breath and exclaimed, “O! That … Is … Happening! WOW!” Precisely on my WOW, two overhead lamps exploded. Everyone took cover. When I got back on my feet, I expected a swift boot out the door, but the director only looked down at my photo.

“Thank you,” he said with bland dismissal.

It was the most attention any director had ever given me, and this was for Target’s national holiday ad campaign!

I headed home, stressing those lights. Could they tell that I made them blow up? I promised myself they could not. Nobody can make stuff explode at will. Crazy shit like that just doesn’t happen. Right?

With me it’s a simple recipe. Start with stress. Brew for hours. Add nerves. Continue brewing. Finish with a sudden shock of some kind and shit blows to smithereens, guaranteed. I sighed and tried to clear my head. Optimism was all I could afford after a big audition. I needed to get home and relax.

I shared a loft with a professional violinist named Eliza. I could hear her playing as I walked up the stairs to our place. It was instant Zen. I was about to heave a sigh of relief when the sound of a cello came in beneath the delicate notes of the violin. Eliza was home, but she wasn’t alone.

Our landing was obstructed by a cello case. Michelangelo’s “The Creation of Adam” was painted on its side — just the close-up of God’s finger about to touch Adam’s. It drew me in and made me crave the next moment. I longed for those fingers to somehow connect.

Eliza stood playing as I let myself in. Opposite her was Charles, her cellist ex-boyfriend. We had never met, but the fact hung thick in the air.

“Elaine!” Eliza stopped playing and relaxed with a happy sigh. “We were just reliving some old memories, Charles and I. His tour wrapped last night, and he needs a roof over his head, just for a few weeks. Then the tour resumes, and it’ll be like —” She stopped suddenly.

“Like he was never here,” I finished. Charles had left town for the indie-rock-tour circuit, sticking Eliza with rent for two and no backup plan. She and I met just after that. She had been miserable — far more upset about being alone than being behind on rent. Now, Charles reclined too comfortably in his chair, clearly devoid of any remorse. This fucking Mumford didn’t give a damn about Eliza. He just needed a place to crash.

I thought through the logistics. The loft offered maybe 400 square feet of living space. Three grown adults here would not work, but I had no real say. Eliza was the only one on the lease. If I lost this snuggery, I would have to leave New York for good. Fuck that. Home was here until I had something to show for myself.

A flash of memory gave me an idea. One of my first mornings at the loft I had a big audition, so I rocked some hip hop on my phone speaker and stood on my head. It’s my method. The beat was about to seriously drop when the phone popped into my face — no reason, no explanation. It clattered into silence a few feet away.

“Whatever just broke,” Eliza began in a flat assertion, “…I’ll pay for.” She had been on the other side of the room, nowhere near me or my phone. I regarded her with astonishment. It had been a pop not an explosion, but everything else fit.

“That, was you?” I asked. “How long have you been popping things?”

“Me, too.” I confessed. Eliza shot me a wide-eyed look.

“What sets you off?” she whispered.

I gulped to steady myself as I came back to the here and now. I held up my smartphone for Eliza to see. “Every hip hop and R&B song I have,” I explained. “There are 750 songs on here, Eliza. If he stays, it’s all you’ll hear — ever. No reprieve.”

Eliza blinked at me for a second before understanding knitted her face into a pout. The next instant, my smartphone leapt into midair and detonated into a thousand silicon missiles. Charles wrapped himself around his cello protectively. I dove for cover and exploded Eliza’s hot-pink chucks right off her feet. She went slightly airborne and slammed into Charles on touchdown. There was a whiny crunch followed by a sharp note of a broken string. Eliza got up, eyes wide with alarm. Charles yelled as he stood. They had fallen on the cello, their collective impact smashing it into a ruin. Remorse was a dull and rusty knife in my gut as I examined the mess.

“I didn’t mean to crash Eliza into your cello,” I said with honest contrition.

“Crash her back,” he ordered numbly.

“Crash her back together.”

“Who the hell’s Jackie?”

“THE CELLO IS JACKIE…” Charles howled.

“…named for Jacqueline du Pré.” Eliza explained quietly from across the room.

“JUST DO SOMETHING!” He cried.

“If you can explode things apart, tell me why you can’t explode something back together. Eliza said you’re an actress. ACT LIKE YOU CAN. BELIEVE IT and fix Jackie.”

Fuck’s sake, what the hell was I supposed to do? How was I supposed to act? Then I remembered my Target audition earlier. The casting director kept asking me for more. I didn’t know what that had meant either, but I damn-well delivered. I was so close to getting somewhere in this city, but I couldn’t do it homeless. I purchased the possibility that I could do what Charles was telling me. This was just the next director asking me for more.

I had to think my way through this. How to act? For a minute, nothing came to me. Then I saw the cello case in my mind’s eye; God and Adam, fingertips frozen, a symphony to the idea of touch. Everything that came after that thought happened at the speed of light inside my head:

I landed the Target ad.

Everything was all, somehow, OK.

For one bright minute, I let those three dreams be real inside my head, if nowhere else ever again. It was like playing pretend to the tenth exponent. I was buzzed on relief and joy — such a feeling! With this, I could deliver. I imagined the cello back in one piece. I told that high, bold feeling in me that was real, too. I became a lightning bolt racing across the sky and out towards God, Adam and the stars. At that speed, so high up, so close to that touch of fingertips, anything could happen.

I found the floor beneath my feet and exhaled. I opened my eyes and cast around wildly for where Jackie du Pré had been. A sad pile of wood and strings was still heaped where a cello used to be. I was defeated. I would get my things and leave.

A cell phone buzzed, but I did not react. On the third buzz, I looked around. MY phone, the one Eliza had just blown up, lay at my feet — the screen, intact, signaling an incoming call.

I lowered the phone and stared at it, then I caught sight of Eliza. She and Charles both stood with bright eyes transfixed upon Jacqueline du Pré. I had turned my back on the whole debacle when I answered my phone. I looked again to see her, this time whole and beautiful as the day she hit the showroom.

“I’ll understand if you want me to move out,” I whispered.

“Oh no, Elaine,” Eliza whispered back. “I think apartment hunting should be on tomorrow’s agenda. Perhaps we could explode a two-bedroom together.”

Life has been crashing right into place for us since Jacqueline du Pré. I am THE FACE of Target’s holiday ad campaign. UBIQUITOUS, that’s what Eliza calls me. I’ve given her a speed course in crashing things together. She’s not bad — it landed her first string at the Philharmonic. We could get our own spaces, but the thought makes my heart slow. Things crash apart so often all by themselves. Why add to the trouble?