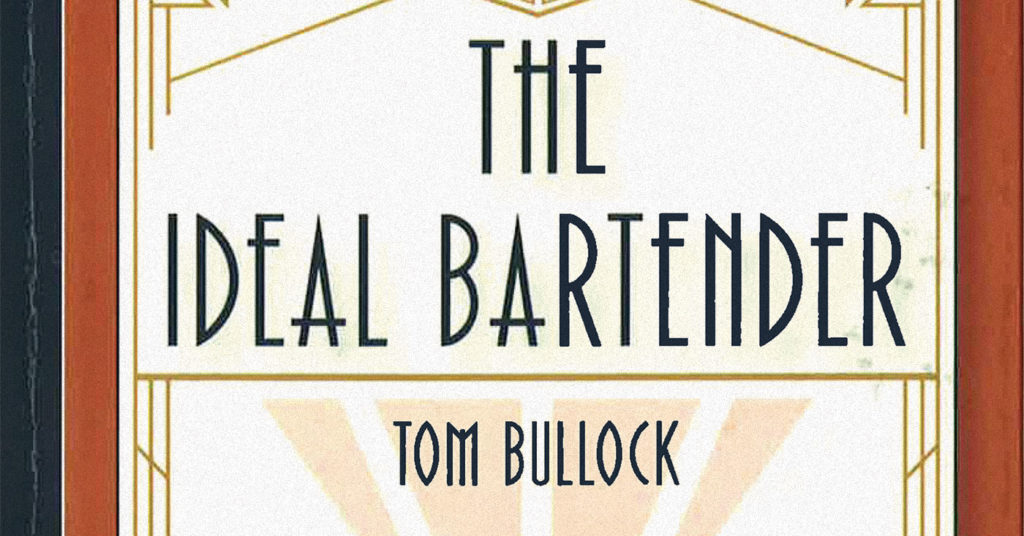 Greg Boehm owns the world’s largest collection of cocktail books — 3,800 and counting. The books are part of the research library for Boehm’s company, Cocktail Kingdom, which manufactures professional barware and reprints vintage bar literature. Several years ago, a woman contacted Boehm looking to sell a cocktail book he didn’t own — a first edition of “The Ideal Bartender,” by Thomas Bullock. The 1917 book was part of an estate sale, and Boehm jumped at the opportunity to acquire a rare artifact of cocktail history: Bullock was the first African-American to publish a cocktail book, and his was one of the last drink collections released before the United States banned alcohol sales during Prohibition (1920 to 1933).

“In the cocktail bar industry, unfortunately, the African-American community is not very well represented at all. It is just not a diverse group, so anything that lends diversity to bartending is a good thing,” Boehm explained. “In addition, ‘The Ideal Bartender’ is a little snapshot of what people were drinking pre-Prohibition, and, unlike a lot of cocktail books, none of these recipes were cribbed from anyone else. This is a completely unique cocktail book.”

Boehm was so excited by antiquated recipes like the Onion Cocktail (similar to a Gibson, but with Old Tom instead of London Dry) and the Fedora (Curacos, a syrup made of orange peels; brandy, rum and whiskey) that Cocktail Kingdom published an exact facsimile of Bullock’s book in 2015. But one of the curious aspects of “The Ideal Bartender” is the lack of personal information about the author. With the exception of a small quote from Bullock, the recipes are accompanied only by a testimonial from the St. Louis Post-Dispatch and an introduction by George Herbert Walker, the grandfather and great-grandfather of the 41st and 43rd U.S. presidents.

Walker and the newspaper praise Bullock’s talents as a bartender, but they tell us nothing about the man. The best way for a modern cocktail enthusiast to appreciate Bullock and his career is to consider them in the context of the time in which he lived.

“The Ideal Bartender” celebrates its 100th anniversary in 2017, and Bullock seems to be as hot as ever. Planter’s House, a cocktail bar and restaurant in St. Louis, named a Bullock Room in his honor. And in 2013, D’USSÉ Cognac established the Tom Bullock Award for Distinguished Service in Washington, D.C. Darryl Bullock, Thomas’ grandnephew, was on hand for the ceremony. He admitted to not knowing much about his famous relative, but he said, “My uncle must have been very good at what he did for so many people to know his name. And that makes me proud.”

Bullock was born in Louisville on Oct.18, 1872, less than a decade after the Civil War. His father, also named Thomas Bullock, was a former slave who fought for the Union Army and worked as a furniture mover after the war. The 1880 Census shows the older Bullock living with his wife, Jennie, and their three children — Tom, 7; Lena, 6; and Clarence, 1.

Louisville was a Union stronghold during the war, but the city became a magnet for ex-Confederates after the fighting ceased. The Louisville & Nashville Railroad controlled the only working tracks to the Deep South, so the River City became a major center of trade. By 1870, the city’s population had increased more than 48 percent, to 100,000 people.

The former rebels soon took over Louisville’s culture. Historian George C. Wright wrote, “It seems that a part of the ‘rite of passage’ into the business world of the city was to have been an officer of the Confederacy. Nearly all of Louisville’s journalists, lawyers, realtors, and merchants were former rebels.”

One of the Southern traditions that blossomed in Louisville after the Civil War was the use of African-American bartenders. African Americans were usually barred from these positions in Northern-leaning cities, except for places that catered to black patrons. Because of the potential earnings for tips, and the opportunity to rub shoulders with the country’s elite, tending bar in posh places was considered a desirable job pre-Prohibition and was limited to white men in most major cities. In fact, the Cincinnati’s Atlas Hotel was the subject of a citywide boycott in 1893 after the owner hired an African-American bartender named Louis Deal.

“In the North, black bartenders were seen as competition and shut out entirely. In Southern-leaning cities like Louisville and St. Louis, the situation was different. They had a history of using African Americans in all types of serving positions,” said cocktail historian David Wondrich, who recently wrote an article about Bullock and other black bartenders for the Bitter Southerner.

In the era before Prohibition, tending the bar was a very personal job. In the better establishments, bartenders were expected to be worldly, to keep up on the news and be able to carry on good conversation. This allowed some black bartenders to develop close relationships with their regular customers. Dick Francis was such a favorite of Washington politicians that he ran the Senate’s bar in Henry Clay’s day and John Dabney was so good at mixing Mint Juleps in Richmond that he made enough money to purchase his freedom and his wife’s.

Bullock learned his bartending skills at the Pendennis Club, Louisville’s elite private club, where he started out working as a bellboy. The Pendennis Club was founded in 1881. The club did not move to its current home at Second Street and Muhammad Ali Boulevard until 1928. When Bullock worked there, it was in a downtown mansion formerly owned by William Burke Belknap, founder of the Belknap Hardware and Manufacturing Co. President Chester A. Arthur dined there in 1883 when he came to Louisville for the Southern Exposition.

Not much is known about Bullock’s time at the Pendennis Club. The organization does not keep archives from that period. However, this was the club’s heyday, when Henry Bain, creator of the eponymous sauce, served as head waiter.

One of the legends that attached itself to Bullock’s time at the Pendennis Club has to do with the creation of the Old Fashioned. It has been long rumored that the drink was invented by club member James E. Pepper and Bullock might have played a part in the creation. However, both Boehm and Wondrich said the Old Fashioned recipe predates the Pendennis Club. If anything, they say Louisville can claim to have popularized the drink. It does show up in “The Ideal Bartender” as simply “Old Fashion Cocktail.”