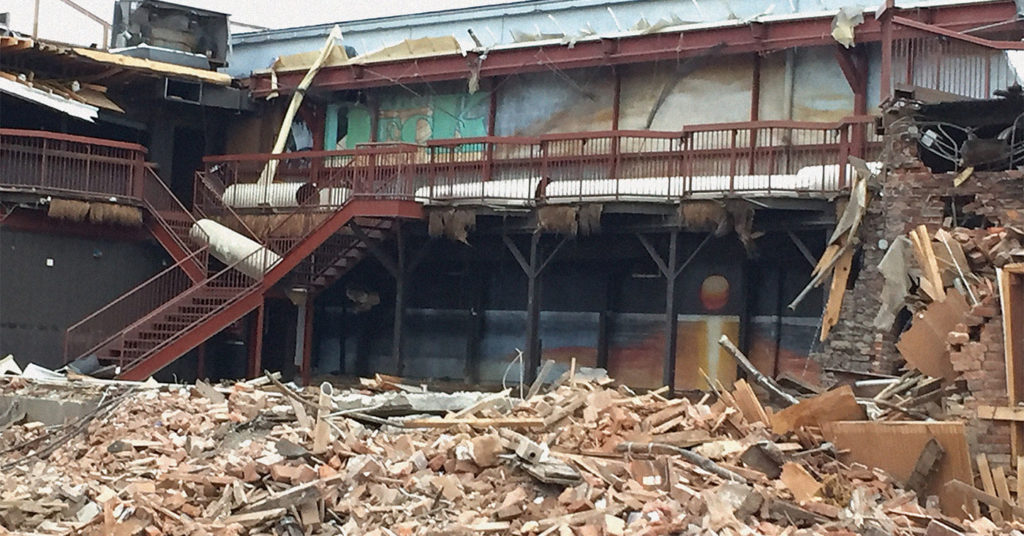 Phoenix Hill Tavern, an evolving legend since 1976, began its last act in recent days, disappearing beneath bulldozers to make way for gentrification. As owner Ben Rogers said in announcing the closure in 2015, the tavern began as one room in a rundown warehouse, eventually expanding to “a sprawling 25,000-square-foot ‘Live Music Showcase.’” Now, an Ohio developer plans to turn that corner into 260 or so apartments. Here, Will Russell, cofounder of the Lebowski Fest and former owner of the WHY Louisville stores, remembers the magic that was Phoenix Hill Tavern.

Here lies Phoenix Hill Tavern, a place that I absolutely adored. The place was a wonderland of weird and wonderful kitsch filled with friendly strangers drinking out of fishbowls and singing karaoke on the best karaoke stage in town. The dance room was like boarding a massive pirate ship with neon palm trees, sand pits and stripper poles. It was a multi-level labyrinth of rooms and you never knew what you’d encounter on the other end. This was a place with no pretension, no hipness to be endured, just good times being had by all. There was a spirit to this place that I cherished, and it was a place where I could really let go and enjoy myself. I have had some of the best nights of my life in this place, and I am truly sad that I can never walk through those doors again. This place was like an amusement park to me and, as a non-drinker, there were plenty of things there to keep me amused. Some have been baffled by my love of this place, but this was one of my favorite places on the planet. My friends who went there with me — they understand. There will never be another place like Phoenix Hill Tavern. Thank you for the great times.