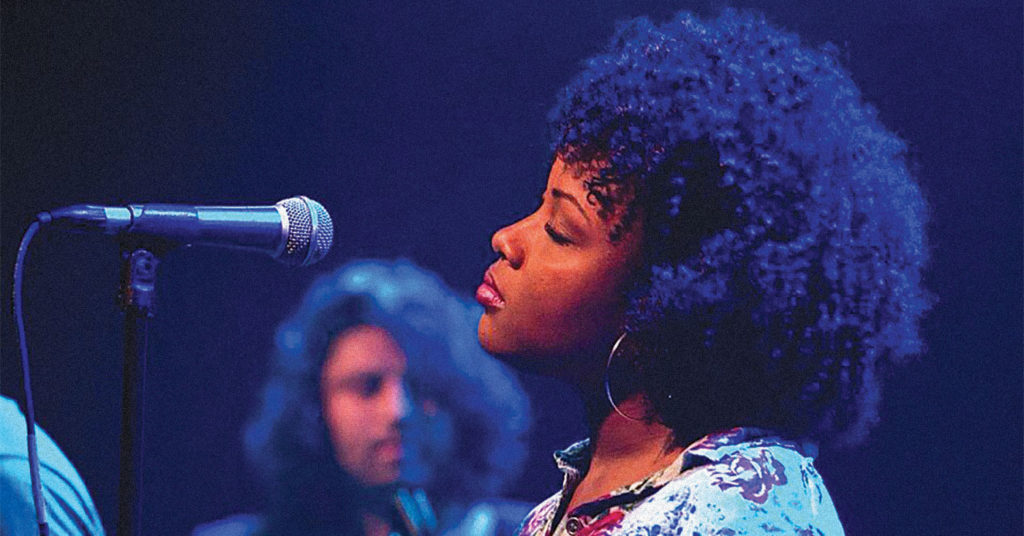 Despite having a million views on YouTube and a fan following in the thousands, this is one young singer-songwriter not interested in being famous.

“Everything I do is for the healing of other people and myself. My music is meant to be like therapy,” said Vay Davis.

Call it a vocation she was born to — Davis has been singing for longer than she can remember. “My dad told me that before I could talk I was singing the songs on the radio,” said Davis, who lives in Old Louisville.

By age 9, she was singing in church. Formal training followed: Davis studied opera in high school and college. Cue daydreams of taking bows on prestigious stages. But then something shifted. “When people said my music touched them, and told me how it changed them, I knew it wasn’t about me,” she said. “That’s when I really fell in love with singing.”

Today, Davis considers herself a full-time musician, even though she also holds down a full-time day job. (She teaches preschoolers and toddlers as an early childhood educator with Bright Horizons.) On evenings and weekends, she devotes herself to music, both solo and as part of two groups. She formed Nzuri Music as a duo with Kiara Watts in 2013. And since the start of 2016, she has been part of a seven-member ensemble with the memorable name of Otis Junior and the Jesse Lees.

Davis describes her musical style as acoustic soul, citing Lauryn Hill as her biggest influence. However, on her YouTube channel, she covers artists across the spectrum, from Beyonce to Fetty Wap, and John Legend to Ariana Grande.

Davis also writes her own material. “My music is like a diary. The songs I write are about how I feel, and the things going on around me.” When she performs solo it’s her own work.

Recently, she has expanded that activity, writing the music for the Roots & Wings production of “The Blood Always Returns” at the Kentucky Center for the Arts last fall. The sold-out show, which was about reconnecting ancestral roots spanning Africa, Appalachia and Kentucky, came out of a trip to Senegal in July.

In Dakar and other parts of the country, she performed solo and with Nzuri Music in festivals and ceremonies. With contemporary Senegalese musician Thieuxy, she recorded a song called “Find Myself.”

That international exposure suggested the possibilities of finding a wider audience. “One of my biggest dreams now is to move to New York and start performing in plays and operas, so it’s something I’m doing consistently and regularly, throughout the day as well.”

It may not be her intention, but Vay Davis might just end up being famous after all.