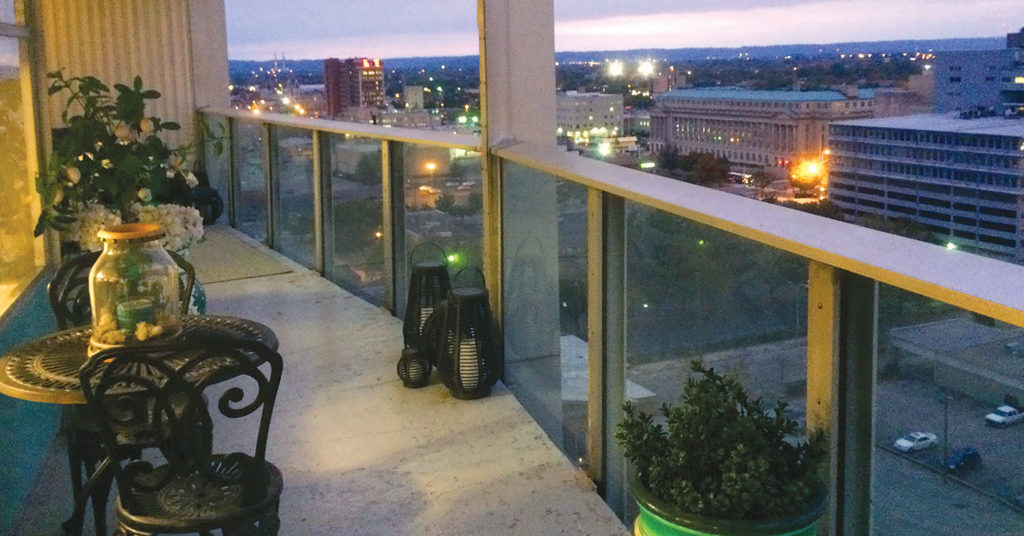 The new renovation of the 800 Building, a familiar form on the SoBro skyline, is an important development for our downtown. Despite only limited site and exterior modifications, the potential for it to be refilled with tenants after decades of limbo is an urban-design win in a neighborhood that needs one.

The 800 was designed by Loewenberg and Loewenberg of Chicago with the firm of then-prominent, local architect W.S. Arrasmith, at the height of his influence. Known for such projects as moderne Greyhound stations, Bowman Field and the police headquarters, Arrasmith had built a reputation for imaginative, exquisitely-made streamlined buildings. Construction of the 800 Building began in 1961 and was completed, opening to great fanfare, in 1964. A premier residential address. The tallest building in Louisville (until 1974).

It still towers, heroic on the skyline, with a shifting profile as you move around it. Approaching, as the distant view evolves into middle-distance, broad gestures like frame/panel relationships and small cantilevers start to become visible. Even closer inspection yields an understanding of small details, all of the little pre-standardization pieces fabricated to assemble this large structure. Most people talk about the color of the panels, but there is so much else about this building that makes it unique in Louisville and unique to Louisville.

Standing at the entry, looking up: The curtain wall has not been renovated at all, as might have been expected. This observation, though, is quickly followed by appreciation that the developers haven’t jumped to make modifications. Any intrusive renewal of this facade system would have to be handled very carefully and thoughtfully.

Directly upon entry City Club Apartments’ chosen approach to the renovation overwhelms: over-the-top mixed finishes, and intentionally clashed patterns. The lobby living room is too cool to be cozy, a shallow space crowded up against the glass. The aura established by ubiquitous dance-floor music and a faux fireplace. Overheard in the lobby: “I guess if you’re going to play it up, play it up, right?”

The interior decor — I’ll just say it — isn’t aligned with my taste. The decisions made are a response to the desires of a younger market looking for bling. And this is probably a good thing, whether it matches with what I like or not. I just couldn’t help notice how the old marble looked quietly elegant next to these interloper materials.

Besides the first level lobby, lounge and theater, other communal spaces that were most-significantly transformed include the “Sky Park” and penthouse. These shared spaces are what will make the renewed 800 work as a development proposition. City Club knew that the target market residents use space differently. They don’t stay in their rooms but choose to use the club room, pool, restaurant, theater and other amenities as extensions of home. These tendencies extend to the street, as well. 800 tenants will be city dwellers, forming relationships in their urban neighborhood along the streets and sidewalks.

Obviously, the reason to be on the upper levels is the view. Despite jarring assemblies of cheap materials next to more precious ones, there is no danger the crazy decor will distract here. From this height and location, looking out across the city, no matter what direction, is sublime. At the roof terrace, minimal and effective glass walls were added for safety and wind protection, a much-touted rooftop pool was inserted and spaces are zoned using planted walls, furniture and an overhanging canopy. The more-permanent modifications are done simply, background for the finish choices of today but accommodating those of future designers.

Where new residents will live at the 800 is exactly what you’d hope: gracious rooms, slick kitchens, more storage than a Highlands house, retro-tiled bathrooms and full walls of windows opening to generous balconies.

Ignore the photo of the skyline inexplicably covering one whole wall and walk through the broad sliding doors onto the balcony for the real thing. This is something you can’t do in many places in Louisville — and it feels great. Imagine standing in your own private perch, the city spread in front of you, while drinking your morning coffee.

City Club has reintroduced 800 as a hot address on the residential market. Opening festivities were exactly what they should have been, both for today’s potential residents and for the legacy of a swinging downtown pad of the ‘60s: a scene. A broad mix of young folks dressed up, socializing around an open bar. A DJ “spinning” digital files. Silver mylar balloons. People having fun.

When faced with a down-at-the-heels building, how should it be treated? How to update a half-century-old building recognized for its unique design elements, presenting it as new and fresh while still honoring its bones? City Club Apartments was smart, fixing what had to be fixed and then layering on loud, but transitory, materials so that the surfaces can be attention-grabbing now…but then change with trends, without interference with the legacy materials that remain.