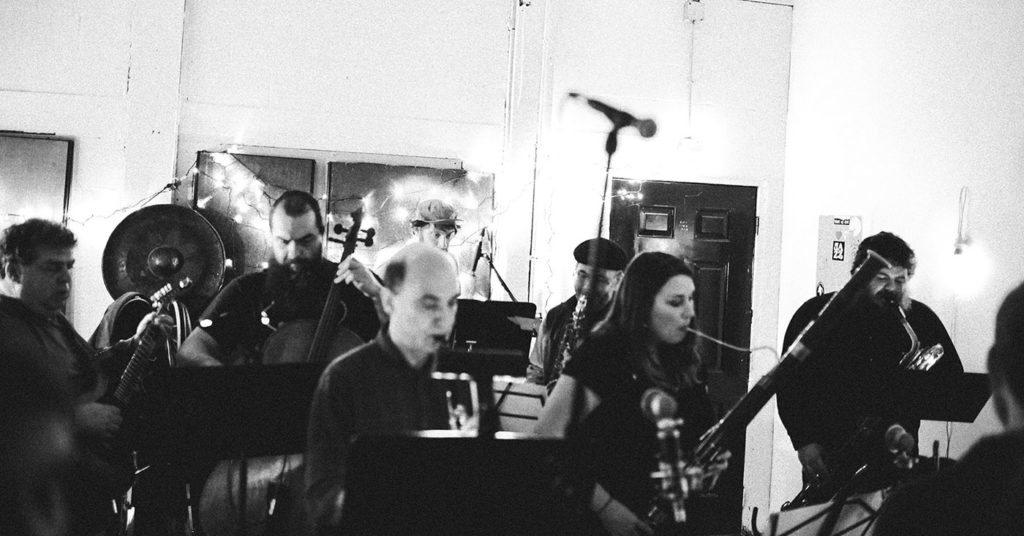 It’s become a recurring gathering on Thanksgiving eve for the last three years. An array of local players come to contribute, with new ones always bound to show up. But what happens relies on the commitment of its implementors — united, willing and diligent in the task of upholding 53 musical phrases for an hour. The novemberGroup — “a wide variety of classical, avant garde, and punk musicians from Louisville” — is its life force. The Clifton Center’s Eifler Theatre is its host.

The tradition continues on Wednesday, Nov. 23, when novemberGroup will again adapt the 1964 minimalist composition by Terry Riley, “In C.” Using a multitude of instrumentation, the space for improvisation makes it a living composition. The listener witnesses the unfolding of interwoven melodies thriving on a vital, percussive pulse, and what transpires in between is a discovery for both sides. LEO spoke with two of the group’s founding members, guitarist Joee Conroy and percussionist JC Denison, to get perspective on what to expect this year.

LEO: Why on Thanksgiving eve and why “In C?”

Joee Conroy: JC started this tradition and has kept it going for several years now. A lot of folks are in town, and it seems to have grown local roots.

JC Denison: We did it several years back on Thanksgiving eve, because Oscar Parsons and I wanted to set up a show together on that night. His band, Thomas A. Minor and The Picket Line, played and Joee Conroy, and I assembled a group to play ‘In C.’ We had a potluck dinner and the whole thing took place in the basement of Land of Tomorrow. It’s a great night, because great folks are usually in town, and people typically don’t have to work the next day. We do ‘In C’ because it’s the perfect piece for assembling a local misfit orchestra, and if you’re familiar with the piece, minimal or no rehearsal is required. And it’s very fun.

How does this performance change over the years?

Denison: The biggest change is in the players and the instrumentation. We had vocals the first year, which I’d love to have back at some point. Last year, we had four mallet players, which was pretty killer. And three electric guitars. Because the piece calls for any number of people and unspecified instruments, it is different every single time it is performed. That’s part of the beauty of it.

Conroy: The performance seems to develop more depth every year as returning players get a better grasp as how the piece works, and the newcomers bring energy and the newness of discovery. The rhythmic element becomes more focused as people start to lock in to the what other players are doing.

As an individual in the group, how do you bring your own identity to this piece?

Denison: Well, I always play the pulse, which is two High C notes on the xylophone played constantly throughout the piece to mark tempo. As a drummer, I love being immersed in the sort of meditational athleticism that playing that for an hour requires. Also, I really enjoy just trying to get 20 or so people, whom I absolutely adore, to assemble under the same roof to do what we all do best.

Conroy: Once you find your rhythmic pulse, you start to feel how others around you are dealing with the score and the nest thing you know, you get swept away and lost in the cyclical melodies of each stanza, and how they fit together. Soon you are looking around with big grin on your face, and you start hearing the overtones of the whole piece, instead of just what you’re playing. This piece gives the individual the freedom to play the score at one’s own pace, but the music becomes so much greater than anybody’s individual contribution. •

All proceeds from this show benefit the Louisville Leopard Percussionists. Cassettes tapes of last year’s concert will also be available for purchase via AuralgamiSOUNDS Records.