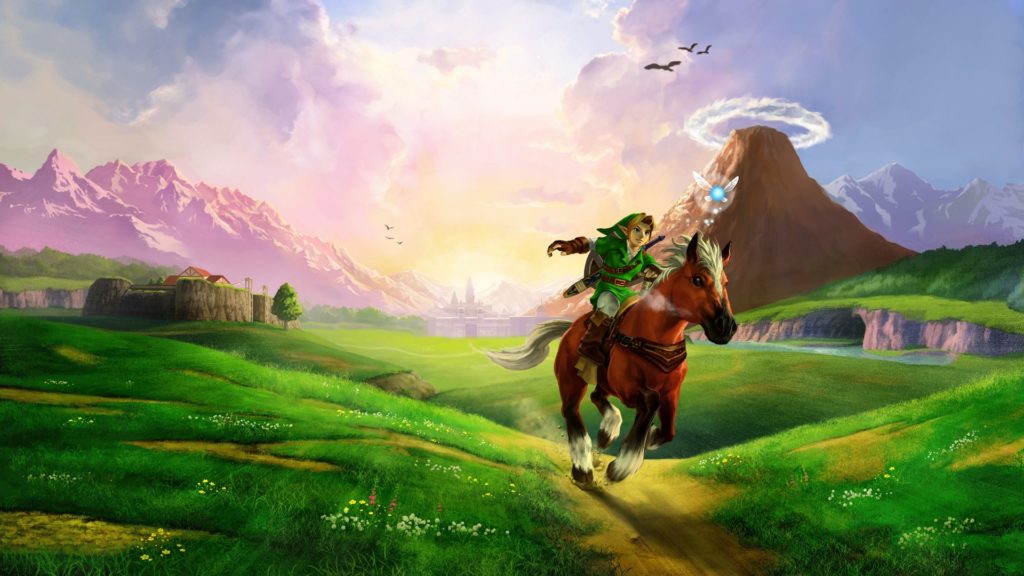 “The Legend of Zelda,” the landmark Nintendo series that has never lost momentum in its three decades of existence, has aged and developed as well as anything in video game history. The old games are just as good today as they were on the day they were released, and the newer ones continue to innovate how we play video games. Something that we might often overlook, with all the games being epic and ambitious in scale, is that the soundtracks are equally as powerful as the gameplay. From nerve-racking boss battle scores to serene melodies that accompanied Link through villages, the Zelda franchise has always been able to send players on a roller coaster ride. Seven LEO writers recall some of their favorite musical moments from the soundtracks.

The Legend of Zelda (1987)
The year 1985 seems like a lifetime ago. We were a nation stuck right smack in the middle of the Reagan nightmare, and it felt like all of America was actively living out an episode of “Stranger Things.” But, out of the rhetoric and darkness, just before Halloween, there emerged a glimmer of hope in the world of escapism, offered by the Nintendo Entertainment System. In November 1987, the United States was introduced to Link (our plucky elven protagonist) and “The Legend of Zelda.” It was the first installment of what would become one of the most-beloved and enduring franchises in all of video games. It was a revelatory time in music when we were only just discovering that digitized sounds didn’t have to be reserved for simply enhancing live instrumentation, but rather could actually be the instrumentation. The music for “The Legend of Zelda” was composed by Koji Kondo (credited in the game as Konchan) who composed several pieces of music for the early NES games and scores for future installments in “The Legend of Zelda” video game saga. The intro is iconic to a whole generation of “console kids” — slow, low and ominous, a variation on the Overworld theme, which we would come across later in the game. However, the it was not Kondo’s initial intention: Originally, he planned to use a piece entitled “Bolero” by Maurice Ravel, but copyrights ultimately ended up being prohibitive. Which meant that late in the game’s development, he was forced to compose original intro music. So yes, a last-minute smash and grab of eight-bit creativity is all it took for Kondo to compose one of the most endearing and transcendent pieces of music the 1980s had to offer.—Brent Owen

The Adventures of Link (1988)
Fans of the series recognize Zelda II as an outlier because of its drastic differences to the original, as a sophisticated side-scroller with an emphasis on classic role-playing elements and an absurd level of difficulty. I’m not sure anyone has gotten through Death Mountain without help from a Nintendo Power magazine or the internet. One reason I find myself coming back to this ridiculously hard eight-bit game is the beautifully-strange soundtrack. Like the gameplay, the music is vastly different. While the senses of mystery and adventure are still broadly maintained, there is a peculiar vibe consistent with each tune. The opening title theme immediately puts you into the Hyrule universe, but unlike any other Zelda installment, this one utilizes a constant tremolo effect that is used heavily throughout the soundtrack. The Overworld music establishes an exciting mood for exploring and adventure, as you curiously wonder about investigating caves and palaces, never sure of what you will encounter next. The Palace Theme puts you on edge with an uptempo, nerve-racking tune that is sure to make you aware that you aren’t welcome, and whatever it is you’re aiming to accomplish will be a god-damned challenge. After all of the tension, it’s always nice to visit a nearby town, if not only to hear my favorite piece of music in this game. It’s a refreshing change of direction as Link is at last out of harm’s way, albeit briefly, making this, along with the House Theme vastly underrated pieces in the series.—Philip Olympia

A Link To The Past (1992)
While “Ocarina” remains, and probably always will be, the most pointed-to moment in the series’ evolution in terms of gameplay, “A Link To The Past” might have been the game-changer in terms of the music. And that’s not a swipe at its two NES predecessors — both of which known for their iconic, eight-bit, arcade-esque, erratic ‘80s keys-fueled soundtracks which that are deeply attached to a time period. But “A Link To The Past” is where the music started expanding a bit, packing in more depth and sounding more distinct. It all starts with the Overworld theme, an uplifting, yet still kind of creepy, track that takes that original hook to the next level, with drums that sound like a drunken marching band joined up with an ambitious and strange keyboardist. That, The Lost Woods theme and the music when you step into the Dark World might not be as remembered as the music in the other Zelda games, but it certainly broke open some ideas and themes that carried the music of the franchise to new heights.—Scott Recker

Ocarina of Time (1998)
Here I am, a fantasy lightweight with a nap fetish, listening to “The Legend of Zelda: Ocarina of Time.” At times, the soundtrack is just a step above an AngelFire MIDI page. It is innocent — sometimes dreamy, sometimes jumpy and plastic-y. This experience led me in a couple of directions. One, I needed to find out what the hell an ocarina was. I discovered a dolphin-shaped ceramic instrument that sounds similar to pan flute and hearkens to the space of faeries and magic. It is one of the oldest instruments on earth. Being prone to rabbit holes, a further search for the ocarina turned up a world of Zelda and fantasy-inspired ocarinas — the dragon tooth, sweet potato, the English pendant, and the teacup, to name a few. There exists a veritable subculture of clay dolphins to blow thanks to “Ocarina of Time.” When I tell you that fans are serious about this game and instrument, believe me. In the game, the character learns a dozen songs and plays them to complete missions, directly tiring music to the gameplay. Listening to the entire soundtrack in one sitting is a chore. There are moments of minor joy. I did think of naps, and, occasionally, I found myself enjoying it, but any joy was quickly rendered obsolete by the cloying artifice of the intrusive MIDI. Damn the MIDI.—Erica Rucker

Majora’s Mask (2000)
“Majora’s Mask” is the second installment of “The Legend of Zelda” series on the Nintendo 64 game system, following “Ocarina of Time.” While both games are similar in structure and graphics, “Majora’s Mask” is the yin to “Ocarina of Time’s” yang in tone. The entire game is based on a three-day repeating cycle, as you fight your way to stop Skull Kid from bringing down a rather gloomy-looking moon that will destroy the planet, which is bumming out most of the characters you meet in the game. This feeling of despair is echoed in the soundtrack — what would normally be cheery-town music — is tinged with minor chords. While still mostly orchestral, the soundtrack has blips of more-alienating electronic instruments that appear and disappear. Music has always been central to not just the atmosphere of the “Legend of Zelda” series, but to the actions that can be taken, as well. As the game progresses, Link learns new songs for his ocarina which have a myriad of different abilities. The carry over songs from “Ocarina of Time,” such as the Song of Time and the Song of Healing, have a somber tone to them, reflecting the feeling that some maniac is trying to smash the moon into the planet. Link may be only a kid with a sword and some freaky abilities, but “Majora’s Mask” is in many ways a very mature and realized game.—Nik Vechery

Oracle of Seasons and Oracle of Ages (2000)
Consider it a given that Zelda: Symphony of the Goddesses will play no songs from “The Legend of Zelda: Oracle of Seasons and Oracle of Ages.” These two games, released for the Gameboy Color handheld system in 2000, never really get their due. Unlike every other game in the series, they introduced no significant gameplay mechanic, and made use of no advance in technology except, you know, color. Nintendo didn’t even give these games its full attention, and instead split production duties with Capcom, which handed the project to producer Noritaka Funamizu, one of the planners behind “Street Fighter 2” and “Resident Evil,” who (follow me, we’re almost there) hired composers Kiyohiro Sada and Minako Adachi. Since those names probably mean nothing to you, here’s a reason to care: Sada wrote the introductory music to the white-knuckle NES classic “Contra.” He specialized in arcade-style action games, and brought some of that ‘80s shred to Hyrule. Adachi, a then-unknown, went on to score most of the 3-D handheld Pokemon games, and she experimented with that series’ ethereal whimsy on the Zelda score. Together, they made the most of the Gameboy Color’s eight-bit processor, with off-beat themes for various comic characters — subterranean bass such as on the “Moonlit Grotto” theme, and, especially, a skipping, double-time shuffle on the “Oracle of Ages” Boss Battle theme. These songs aren’t as anthemic as the main Zelda series tends to be, but halfway out from under the thumb of Nintendo’s brand control, they achieve something the rest of the series never does: quirkiness.—Joseph Schafer

The Wind Waker (2003)
It’s unlikely that “Wind Waker” is a favorite to many Zelda fans, if only as a release that is neither classic nor modern. On top of that, the cell-shaded animation of the game offers an entirely different visual experience that frightened off players to what was, and still is, an incredibly well-crafted narrative. That attention to detail didn’t stop with the game design, but also was in the music that offers its own stylistic structure to the series. There are plenty of classics to pull from. That soaring riff that accompanies you out in the field, so to speak, or the score that greets you whenever you encounter a fairy are both present, tweaked to reflect the mood. It’s that subtle shift that does it. There is a lot more of a cinematic approach to the score here that blends an old-school feel with baroque-style music and acoustic instrumentation. On top of that, there is this weird tribal element, like distant drums, or rudimentary instrumentation, that makes for a nice counterpoint to a lot of the more regal moments. Of course there is the requisite synth-heavy insanity. Those moments when you’re fighting a boss or in the dark world that punctuates every Zelda epic. This is an entirely understated game made more so by a score that remains low key and unobtrusive, adhering to that Eno chestnut about being as ignorable, as it is interesting, with just enough new elements to stay fresh without ever losing sight of the mission.—Syd Bishop