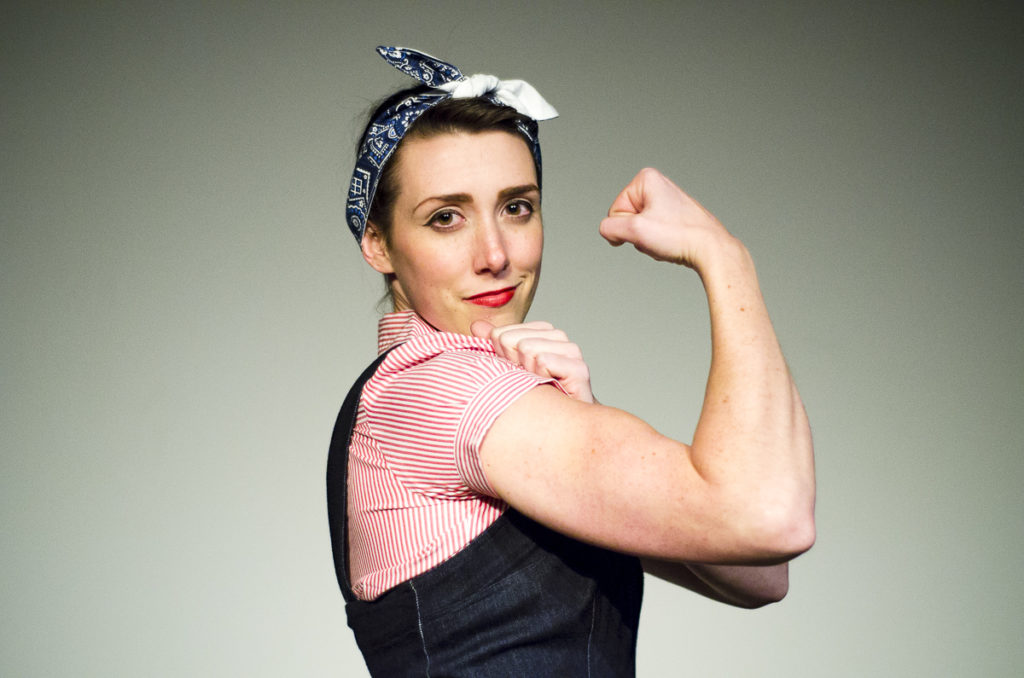 I’m sitting next to Al Capone in a speak easy. Well, it’s a wax figure of Al Capone, in an erstwhile speakeasy upstairs at the Frazier Museum. It’s a sunny fall afternoon, and I’m surrounded by retirees, all of whom seem pretty thrilled to watch a historical figure come to life. That figure is Kathryn Kelly, sometimes known as The Tigress, wife to famous bank robber and kidnapper Machine Gun Kelly. The Tigress will be brought to life by Victoria Reibel, one of the teaching artists here at the Frazier.

Some audiences might know Reibel from the theater scene, where she’s performed with a variety of local companies, including Theatre [502], where she and I have done a couple shows together. But today she’s The Tigress. Not your typical gangsters moll, Kathryn Kelly was instrumental in planning some of the splashiest crimes of Machine Gun Kelly’s career. Reibel does a quick introduction as herself, then she jumps into the character. She’s a good match for Kelly — in her mid-20s, with brunette hair cut short enough to seem like a  flapper’s pixie cut, and she’s got the sort of pale skin and the big eyes that might attract trouble. But it’s her skill with history, not her looks, that keeps all the eyes in the room glued to the stage.

I learn a lot about Kelly in roughly 15 minutes — about growing up, a couple failed marriages and her eventual relationship with one of the most famous criminals of the Great Depression. Reibel, as Kelly, tells us she was even responsible for giving her husband the machine gun and the name to go with it. She tells us about the crime that brought the law down on her and hubby, and just before the cops close in, Reibel jumps back out of the character to tie the story up, and then answer questions.

The show was great, but I’m not really here for that, I’m here to learn what happens before Reibel hits the stage, and to catch a glimpse of the world behind the scenes of the Frazier Museum’s interpreters, a group of five performers who bring a gamut of characters to life, from Lewis and Clark’s companion York, to WWII-era industrial worker Virginia Keith Snawder, to an Elizabethan sword master and beyond. For 13 years, since the museum first opened, it has based its characters on history, tied them into ideas and objects in the exhibits, and shared them with patrons young and old. These actors add a human element to the Frazier’s mission to make history engaging and fun. The interpreters are gearing up for a big Pear Harbor exhibit to open, and even beginning to prepare for a planned 2018 expansion of the museum. So LEO decided now was the perfect time to take a look at how the actors do what they do.

A couple days earlier, I was interviewing Reibel, who started working at the Frazier five years ago for an internship in the summer of 2011, when she revealed the secret name the members of her department use: “We call ourselves The Basement Walkers.”

Tucked away, down in the basement, Reibel was chatting with me in a cozy office full of books and other reference materials. The whole basement — a series of hallways and offices punctuated by occasional historical artifacts — has the feel of an amazing secret. Maybe I just read “From the Mixed-up Files of Mrs. Basil E. Frankweiler” one too many times as a kid, but I think just about anybody would have a hard time keeping his or her inner child under wraps down there.

Rebiel and the other basement walkers, fine — “teaching artists” — are part of the programs department at the Frazier. They do a good bit of hands-on education with school groups and summer camps, but what has brought me out are the historical interpretations — “interps” for short.

“An interpretation is bringing a historical figure, or event, to life for the audience, kind of in a monologue style,” said Reibel. “[They’re] 15-20 minutes, typically, and we dress in historically-accurate period costume. We strive to be authentic and we write scripts based off historical information.”

She’s currently prepping a couple new interps that will coordinate with the upcoming Pearl Harbor exhibit, and specifically key into a “Women of World War II” room. When they are ready, Reibel will perform them for a variety of audiences — school kids, families, donors and rooms full of senior citizens.

Kelly Moore, another teaching artist, has been with the museum since it opened 13 years ago. “We’ve built up over a 100 over the course of the time that we’ve been open. Currently, we have roughly 50 in regular performance. New ones come up, and others recede,” said Moore. She’s responsible for making the schedule, and deciding which interps get done when. “Sometimes even if they’e been shelved, something comes back out, because we’ve got another exhibit, or program relating to that subject,” added Moore.

It makes sense that the daily interpret schedule would depend on what exhibits are at the museum, but it’s also how the teaching artist begin the process of developing new interpretations.

The crew has been busy prepping several new interps for the upcoming Pearl Harbor exhibit. Getting them ready starts well in advance of the actual exhibit opening.

“It’s like, let’s start thinking, let’s start putting our heads together — what are we going to do?” said Reibel, describing the initial brainstorming process. “So everyone has their own thing they are thinking. It can be sparked by many different ideas. Sometimes, it’s the teaching artists own interest, like, “Hey, I wanna, I don’t know, do a bomber. Do a bomber’s perspective,” said Reibel.

She admits that the staff, in addition to being talented performers, are also sort of history nerds. So that bomber, an idea put forward by teaching artist Eric Frantz, is likely a personal interest, as well as a professional one. These folks just love history.

Reibel had a gleam in her eyes when she described one of her initial ideas: “I was like, let me see what I can find, I really wanna do a woman in combat, so I did some digging around, and I found this Russian sniper that would be totally cool, and she was basically the best sniper. Ludmilla Pavlachinka was her name.” Pavlachinka has 309 kills to her name, and is frequently called the worlds deadliest sniper.

But you can’t always get what you want. The decision was made to center the voices of Americans in the exhibit, so the Ludmilla interp got shot down.

That bomber also never flew, because of budgetary concerns. “Sometimes, there are costs which can determine which interpretation you do, based on costuming needs,” she says. “Like, you can’t do a bomber for a World War II exhibit the way you should, because it’s too damn expensive.” Reibel cites the bomber jacket, the flight suit, the goggles, all items thought would need to be as authentic as possible, and museum-quality pieces are pricey.

Authenticity is always a concern, but it’s doubly true for time periods like World War II. “The cool thing about World War II is there are still people alive who remember it, but there can be a down side, in the sense; they remember it, so if you are not accurate to a T, you’re kind of screwing yourself over.”

So, the team had a couple of ideas that wouldn’t work. But what ideas would work?

I’m standing a few steps down the hallway from several full sets of armor, which are pretty cool, but what’s really giving me fits is the barrel of swords.

They are these finely-crafted wooden practice swords, which the interpreters at Frazier use for practice combat. There are several kinds — foils, broadswords, a katana — and I feel a nearly overwhelming urge to pull one out and play with it.

I’m in the basement of the Frazier, waiting for Moore, and I keep telling myself, “It’s not your sword.”

Though a Herculean feat of self-control I manage to keep my hands to myself. A few minutes later, Moore pops around a corner and finds me for our interview.

“It’s a barrel of swords,” I tell her, probably sounding a little childish. She gets a conspiratorial look on her face and says, “Wanna hold one?”

I manage not to break anything, and finally put the sword away.

Moore says that the term “interpreter” originally came from a museum in Leeds, England, with which the Frazier originally had a partnership. “We based it off that and the work they did,” said Moore, “because it made the work so much more alive.”

Sometimes an interpretation can bring alive not just a time period, or even a specific event like Pearl Harbor, but a very specific object. “We’re gonna have this diver’s diary featured in the exhibit,” said Reibel. The diary is an original source of information, and a historical artifact, that tells about the life of a diver who explored the wreckage of war.

“He would go down into the ships and scavenge, and see what the damage was, see any bodies and bring them to the surface,” said Reibel.

Having a primary historical source like that can be very important. After considering and discarding Pavlachinka, Reibel moved on to another badass World War II woman. “So I found this amazing article, about this woman, Cornelia Fort,” explained Reibel. “This article about her being in the WAFS — which is the women’s auxiliary ferrying squadron — they ferried BT-13’s all over. So, female pilots.”

She brings the same enthusiasm to the story of Virginia Keith Snawder, a Kentucky industrial worker (think of a Rosie the Riveter type) who helps showcase the importance of the work done for the war by those who stayed home.

The interpreters write and research their own work, much of it fairly independently. “We do a lot of research, about two months worth, then we write a script on that character or that event in history telling it from a first person perspective, like you’re there,” said Reibel. “We spend about a week getting it memorized and blocked and putting it up, however long it takes.” Then the basement walkers converge, and share their work, giving each other feedback and suggestions.

Judging by the Kathryn Kelly interp I saw, Reibel and rest of the teaching artists bring wit and pathos to their work. So, next week when they premiere pieces about Cornelia Fort, and that wreckage diver, and the WAFS, it’ll no doubt be easy to get caught up in the show. But that’s the point really, you shouldn’t be thinking about the work or the research, or the stories you almost heard.

You just need to relax, and watch history come alive.