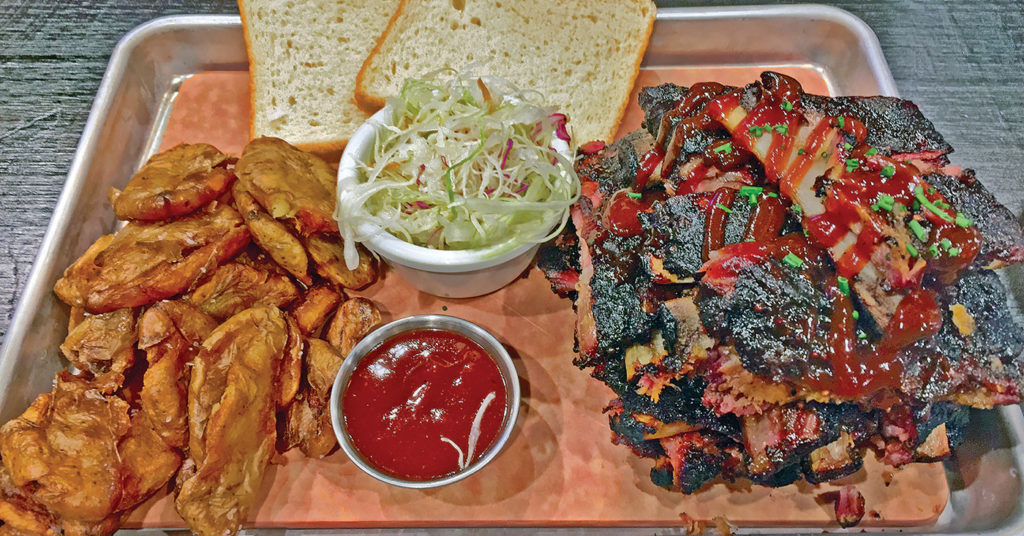 [Editor’s note: This is the second of two parts on Guy Fieri, his impact on food culture and his new restaurant. To read the first part, by food writer Michael C. Powell, click here.]

Guy Fieri has brought his brand to town, and local foodies are all atwitter. The jokes just write themselves, and you can find them all over social media.

I’ve been trying to stay above the fray by ignoring it. I sent regrets on an invitation to a public relations extravaganza at the new Guy Fieri’s Smokehouse in Fourth Street Live! Apparently, if my colleague Michael Powell is to be believed, that soirée attracted a deplorable pack of food writers and bloggers, with noses uniformly raised and pinkies delicately extended. I don’t go to those things, no matter if it’s Fieri or Bourdain or, in his prime, Ferran Adria from the late, lamented elBulli. Well, OK, for Adria, maybe I’d go. But not Fieri.

Does this make me a snob?

I like to think of myself as particular, rather than snobbish. I like authenticity, and I like honesty, in my chefs and in my celebrities. I have little tolerance for the fake. Am I saying Fieri is a fake? Well … his resume is legit, running from a childhood lemonade stand to French culinary training, a hospitality management degree from the University of Nevada, Las Vegas, and a whole stable of restaurants and television shows that have boosted his net worth to $8.5 million, according to the all-knowing internet.

But there’s something that just doesn’t quite fit about an $8-million guy from Sonoma County who wears a blue-collar persona, while affecting spiky bleached hair and Mephistophelian goatee that would probably get him beaten up by the guys drinking beer behind the Sunoco Station in Santa Rosa.

His style screams “Look at meeeeee” in the vernacular of the classic narcissist, and his approach to food strikes many of us as a deplorable dumbing down of a growing American gastronomy that has lifted our national culinary scene since the 1980s — perhaps not coincidentally the age in which the laudatory term “foodie” was born. Perhaps not all the blame goes to Fieri, but he is one of the most visible faces of Food Network, an institution that has visibly dumbed down over two decades, devolving from Sara Moulton and Ming Tsai (and yes, the original Japanese Iron Chef) down past Emiril and Flay. Rachael Ray and, eventually, Fieri and a squadron of pretty faces whose names we don’t remember very long.

Now, to his credit, when I watch Fieri’s D, D & D, I can look past the flamboyant buffoonery and applaud the needed attention that he gives to America’s fascinating family diners, drive-ins and dives in an age that is more inclined to celebrate high-end, chef-driven temples of foodiness. But still, I just can’t seem to get past the sense that, like his compatriot, and possibly role model, Bobby Flay, he’s having us on.

I’m also selectively snobby about corporate restaurant chains run by bean-counters; for what it’s worth, Fieri’s chain seems to be adding a lot of beans. According to his own web page, guyfieri.com, he’s running about 50 units across seven Fieri-labeled concepts, counting Louisville’s Smokehouse, which is said to be the first in a series, with another coming to Norfolk, Virginia, soon. Fieri’s Burger Joint alone has almost 30 properties, most located in music and show venues; nine of them feed the hungry masses on Carnival cruise liners.

In short, while Guy did turn up in town the other night to wow the bloggers and VIPs, I think it’s safe to say that you won’t see his spiky hair bouncing around in the Louisville shop’s open kitchen very often. I’m sure he’ll be in at Derby time, perhaps singing a few verses of “Les Miserables’” catchy hit, “Master of the House.” But I figure the over-under on his being in the house the rest of the year is pretty close to zero.

So I guess it goes without saying that when my editor called on Saturday to say, “I want you to go review Fieri’s Smokehouse, and I want it right now,” I was all “WTF?”

But I got over it quickly enough.

Over many years as a food writer and even more years as a reporter I’ve learned to keep my opinions on the shelf when I get out my reporter’s notebook. Even when I have to express an ass-kicking opinion, I try to keep it fair and balanced, because that’s what reporters do.

So I put on my big-critic’s pants, and off we went to Fieri’s with open mind, heart and tummy. As it happened, Mary and I arrived just in time to catch the opening kickoff for UofL’s show in ESPN “College GameDay.” A smallish crowd, all glued to the big screens, got more and more mellow with every touchdown. This created a good vibe and probably helped my positivity.

The venue didn’t turn me off, either. The former Sully’s Restaurant and Saloon has been made over with a comfortable feel only slightly diminished by Fieri trademarks: A giant mural of leaping flames adorns one wall. (I think it’s supposed to represent barbecue, not Hell.) A huge chrome eagle with Fieri’s name emblazoned across its neck like a bizarre cravat hangs on a pale wood wall. The cozy gloom of the high ceilings is lighted up with lots of glittering lights that make it look a little bit like a catering hall in New Jersey or Long Island, not that there’s anything wrong with that.

The multi-page menu offers plenty of smoked meat, of course, not to mention a smoked-corn side dish that I couldn’t resist; but more about that anon. If you keep up with LEO Weekly’s food conversations, by the way, you’ll be amused to learn that Fieri’s online menu does not list prices. In fact, there’s a pretty good mix of pricing, with “Knife n Fork” main dishes ranging from the high teens up to $35 for a big barbecue platter, which puts just a few bucks below the artisanal lamb rack at Butchertown Grocery, but not by all that much. Snacks, sandwiches and burgers are mostly $10 to $15.

The libations list offers a moderate beer selection and a short wine list, suggesting that vino is not Fieri’s thing. There’s plenty of hard likker, though, with cocktail prices, oddly, not shown on the in-house menu. If you have to ask. … “Julep” is deplorably spelled “Julip,” a sad fail in the Derby City.

It is possible that our first dish was the best dish of our meal: Charred okra and pickles ($4.50) might make okra-haters go “eeuuww,” but okra haters should try this dish. About 20 whole pods were char-grilled tender, smoky and totally un-gooey, dressed with crunchy sea salt and served with delicate pink onion and house-made pickle slices.

A Triple Crown grilled-cheese sandwich ($10.95) made a gigantic portion. A three-decker built on thick Texas-style toast, it was filled with a wacky mix of pimento cheese, Cheddar, smoked Gouda, and macaroni-and-cheese — yes, on a sandwich — made with six cheeses. Served with french fries that were nicely hand-cut, but limp and only just warm, it was a huge, calorific lunch-on-bread. But it fell short on the flavor symphony that I’d have wished for with that all-star array of cheese, and the elbow macaroni just made it heavy. A side of smoked corn ($3.95) was disappointing, pungently flavored with acrid smoke that reminded me of the time we accidentally got a pine log in the fireplace.

A hearty lunch for two, so lavish that we took two big boxes of leftovers home, came to $50.60. Service was outstanding, calling into serious doubt the talk that Louisville is undergoing a service shortage (although the manager, who stopped by every table, hinted that an A-team from corporate was in to get the engine rolling). In any case, truly exceptional service from our server, Tiara. and everyone on the team earned a $20 tip.

So, there are my opinions, and there are my facts. But here’s the real question: Coming off that meal, did my feelings about Fieri change? Well, maybe a little. If my editor hadn’t sent me into the game, I probably would never have gone on my own, because chain, and because spiky-haired buffoon.

But I put on my critic’s hat and went with an open mind, and if it wasn’t the best meal I’ve ever had, it certainly wasn’t the worst, not of my life and not even of this year. The okra was outstanding; the sandwich heavy and boring, and the smoked corn regrettable. Even the ribs, which ought to be the crown jewel of a self-identified smokehouse, were only just OK. And dammit, I forgot to get any Donkey Sauce.

Despite Fieri’s entrance into the city foodscape, I don’t think the Louisville market is dumbed down, not as long as great local places keep coming, and there’s a substantial audience to support them. I think Fieri’s franchise will get along OK, because there was, is now and always will be a massive audience for competent chain food, and the Food Network dumbing down does not diminish that appeal. As long as Fieri remains popular, his name will be a draw. •