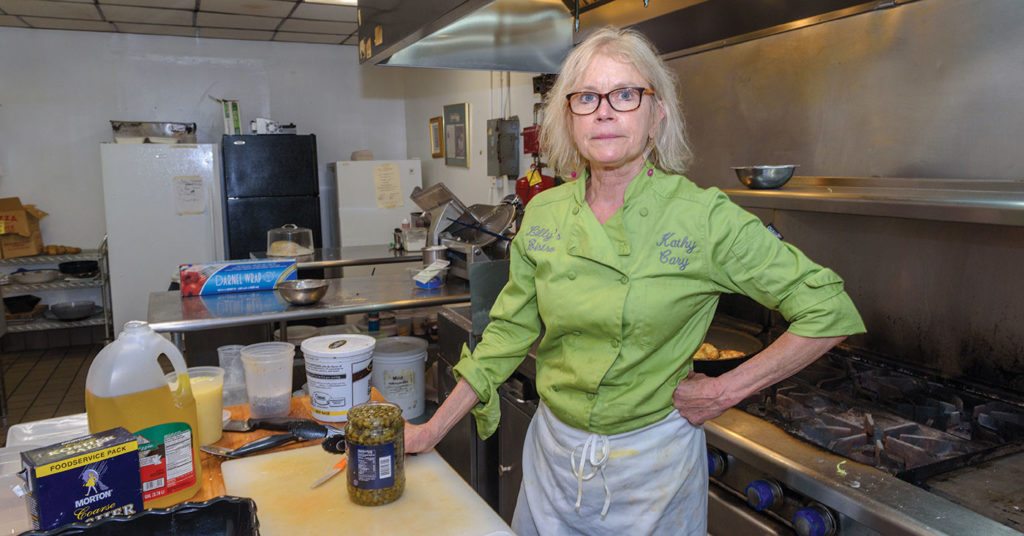 It was a busy Thursday evening in early June at Lilly’s: A Kentucky Bistro, the venerable Bardstown Road restaurant owned and presided over by much-honored chef, Kathy Cary, and there was a notable difference in staffing. Cary usually exchanges her chef’s jacket for a more relaxed and fashionable outfit at dinner to lend a hand expediting dishes from the kitchen to tables. That way she can spend a few minutes greeting and chatting with customers. It’s a hallmark of the restaurant’s hospitable style.

But Cary was being aided by a couple of members of the staff who usually have more narrowly-defined roles.

The bartender was delivering cocktails to tables after he finished mixing them. The hostess was helping to clear dishes. Everything was going smoothly, but the restaurant seemed to be down a server or two.

When asked, Cary acknowledged that Lilly’s was experiencing what was unusual in its more than two decades in business — a staff shortage. Was Cary doing anything to recruit some more people?

“We’ve never had to,” she said. “People have always come to us.”

She may have to rethink that.

The shortage at Lilly’s is not an exception among Louisville restaurants. With a remarkable number of new eateries opening in town this summer (There were at least half a dozen in just one week in July), owners and managers are finding it difficult to fill positions with qualified employees.

Not only are there more jobs to fill, but conversations with restaurant owners and managers revealed that many potential hosts, bussers and other staff can find similarly paying jobs with better hours. And many low-income workers, including newly-arrived immigrants, who would be interested in such work, lack transportation to the areas of the city where the highest concentrations of independently owned restaurants are located.

In their efforts to attract qualified employees, some restaurant owners  have even resorted to offering signing bonuses.

All of this turmoil may affect Louisville’s growing reputation as a dining destination. And even as the increase in restaurants has strained the labor pool, the shortage has, ironically, slowed the avalanche of new restaurants.

“Our opening was delayed at least a month,” said Anoosh Shariat, chef and owner of Noosh Nosh, the casual, sister restaurant to the white-tablecloth Anoosh Bistro located across the parking lot in Brownsboro Center.

Employment of food-and-beverage serving and related workers is projected to grow 10 percent from 2014 to 2024, faster than the average for all occupations, according to the U.S. Bureau of Labor Statistics.

Stacy Roof has been with the Kentucky Restaurant Association since 1995 and is now president. “We need a lot more people to fill jobs than I have ever seen. Many chef-owners haven’t had a day off in months because a key employee left.”

A change in Louisville dining behavior has something to do with the shortage. The professional population of Louisville is growing, with people coming here for jobs with big employers such as Humana and UPS, Shariat said. They tend to eat out frequently and look for variety, which has helped to drive up the number of restaurants. By contrast, experienced restaurant staff who might look for jobs nationally are not looking at Louisville.

“Not that many people are moving here for restaurant jobs,” Shariat said.

Restaurant work is not for everyone, said veteran server Gary Fox of Equus and Jack’s Lounge. Fox is also president of Apron, Inc., a nonprofit that raises money for emergency support of restaurant staff. “Not many people want to work in a kitchen. It’s hot and crowded and stressful. You really have to like the adrenaline rush. If they go to culinary school, they think they should be sous-chefs or executive chefs.”

Fox said he’s worried that the shortage could damage Louisville’s reputation as a culinary destination. A lack of experienced servers, chefs and cooks could result in food tourists’ experiences “not meeting expectations.”

The competition for staff is not just with other restaurants. “We used to get people from Elizabethtown and from Southern Indiana,” Shariat recalled. “But now many of the entry-level workers we would have trained are getting hourly jobs at UPS or at Amazon.”

He also said that a lot of people do not want to work weekends or early or late shifts. Since Noosh Nosh is open seven days a week for breakfast, lunch and dinner, he needs staff to cover all those times.

Asked about his staffing concerns, Michael Reidy, owner of the Irish Rover in Crescent Hill, concluded that Louisville has no “server culture.”

“It is a constant battle for hard-to-get people,” he said. “Young people do not see it as a profession. But this is a business that can be a profession.” Many of his employees are college students, musicians or artists supplementing their income. While he doesn’t have a big staff shortage at present, he said he has never quite been able to “get that one more person” who could fill in when another employee is sick or on vacation.

Louisville does have a culinary school at Sullivan University, but Reidy said his experience is that “Sullivan grads think they are going to be owners-chefs. That’s like going to the NFL out of high school.”

Paula Barmore, Shariat’s wife and restaurant co-owner, said graduates of culinary schools may not always be the best candidates. “They have a huge [student] debt, and restaurant work does not pay enough to pay back those loans.”

Also, she said, would-be workers often are older, with families, and do not necessarily want to work the long hours often required in restaurants. She also agreed with Reidy that restaurants need to do a better job defining their opportunities. “Restaurants have to be viewed as a valid business career for servers, managers and maître d’s. They are places for people who are really passionate about service and food and wine.”

Actually, Sullivan’s National Center for Hospitality Studies, which trains kitchen personnel and restaurant managers, reports that it is placing as many graduates as it can produce.

“As fast as [Louisville] is building new hotels and restaurants are opening, we are not able to keep up,” said Albert Schmid, professor and director of Hotel Restaurant Management, Event Management, and Hospitality Management. “Our students have moved from the Brown Hotel to the Marriott and from the Seelbach to the Hilton Garden.” He cited the expansion of Fourth Street Live! as a pressure on the restaurant workforce, too.

The shortage is raising overall wages. “About five years ago, line cooks were making about $10 an hour. The demand, as well as the national conversation about raising minimum wage to $15, is good overall for hospitably workers,” he said.

Rick Moir is director of operations for the Olé Restaurant Group, which has seven restaurants in Louisville, including Mussel & Burger Bar, Guaca Mole and Mercato Italiano, and he said his strategy for filling positions is simple.

“We pay really well. Line cooks can get up to $17 an hour,” he said. Moir added that chefs are the hardest to find, but there are also incentives for them. The Olé restaurants pay an annual salary of $40,000 to $65,000. “But our chefs also get a bonus percentage of profits, which can be an extra 15 to 25 percent of their base salaries.” That could boost a chef’s salary to around $80,000.

Several other strategies, new and traditional, have emerged to mitigate the shortage.

Chad Coulter, owner of Louvino, a restaurant and wine bar on Bardstown Road, advertises in Facebook and on Craiglist. He also has caught the attention of potential staff with an offer usually associated with large corporations seeking workers who have highly-sought-after skills — a signing bonus.

Coulter, a pharmacy school graduate, saw bonus offers when he completed his degree. “The big drug store chains, CVS and Walgreen’s, were offering incentives, like a BMW, if someone was willing to locate to a store in southern Alabama.”

At Louvino, he said, “We offered up to $600, part of it to be paid after the first 60 days [of employment] and the balance after 120 days. We are also paying half of the health premiums for full-time staff.” Coulter said that a lot of people applied for server positions, and since he had given himself a lot of lead time, he could afford to be selective.

One person he attracted was Felicia Corbett (no relation to local restaurateur and chef Dean Corbett), who had been a bartender at Varanese on Frankfort Avenue for almost eight years. “I enjoyed it and learned a lot, especially about cocktails, but I didn’t see any growth opportunities,” explained Corbett when asked about her move. She emphasized that the work atmosphere was positive and that the staff was passionate about the restaurant, which is why she had stayed as long as she did.

Louvino’s offer was too good to ignore. “The hourly (wage) was better, and there were the health benefits. I am being asked to create cocktails for both locations. It’s an opportunity to grow. And Louvino is wine driven, and I want to learn more about wine.”

Training may also be a key, but this can be highly variable from restaurant to restaurant.

One establishment where it seems to work is Equus and Jack’s Lounge in St. Matthews. Ryan Arnett is the current manager, and he cited chef-owner Dean Corbett’s commitment to giving his staff opportunities. “I started here in 2002 as a busboy,” he said. He worked his way up to server, did some fill-in bartending and eventually was promoted to manager.

It is possible that young people who are interested in restaurant work often need more guidance about the culture and expectations of restaurants. “Perhaps some sort of school is needed,” Fox suggested.

There is a national program that might help ease the restaurant staff shortage in the long term. Roof, president of the restaurant association, is enthusiastic about ProStart, a restaurant curriculum developed by the National Restaurant Association Educational Foundation. According to the association’s website, students who complete ProStart are awarded an industry-recognized certificate — the ProStart National Certificate of Achievement. Students must pass two national exams, demonstrate a mastery of foundational skills and work 400 mentored hours.”

Unfortunately, said Roof, the closest school to Louisville to offer it is Arvin Education Center in Oldham County.

For the summer, Anoosh Bistro and Noosh Nosh have filled breakfast and lunch host positions with high school students. Obviously, that will change when school starts. In the back of the house, many of the kitchen positions typically are filled by immigrants.

“I wish I had a bigger talent for languages,” said Barmore. “We have employees from Spain, Macedonia, South Africa, Tunisia, Cuba, Honduras, Guatemala and Mexico.”

And of course, her husband, Anoosh Shariat, immigrated from Iran decades ago.

She is also frustrated by what she sees as a pool of potential employees living in southern and western parts of the city who cannot get to work in Louisville’s restaurants, a great number of which are located in The East End. “There is a big challenge in both public transportation and affordable housing,” she said.

Jesse Germany, until recently a server at the Crescent Hill Craft House, said that when he started working at the Frankfort Avenue gastro-pub two years ago, most of his colleagues were “experienced veterans.”

“There has been enough turnover that the staff is now much younger,” Germany said. He has just taken a position at Diamond Station in the Highlands where he has “more opportunities” professionally but was quick to point out that he enjoyed his time at the Craft House.

He takes a long view about the staffing situation. “I think five or 10 years from now you might see a slowdown in openings, and the talent pool catching up.”