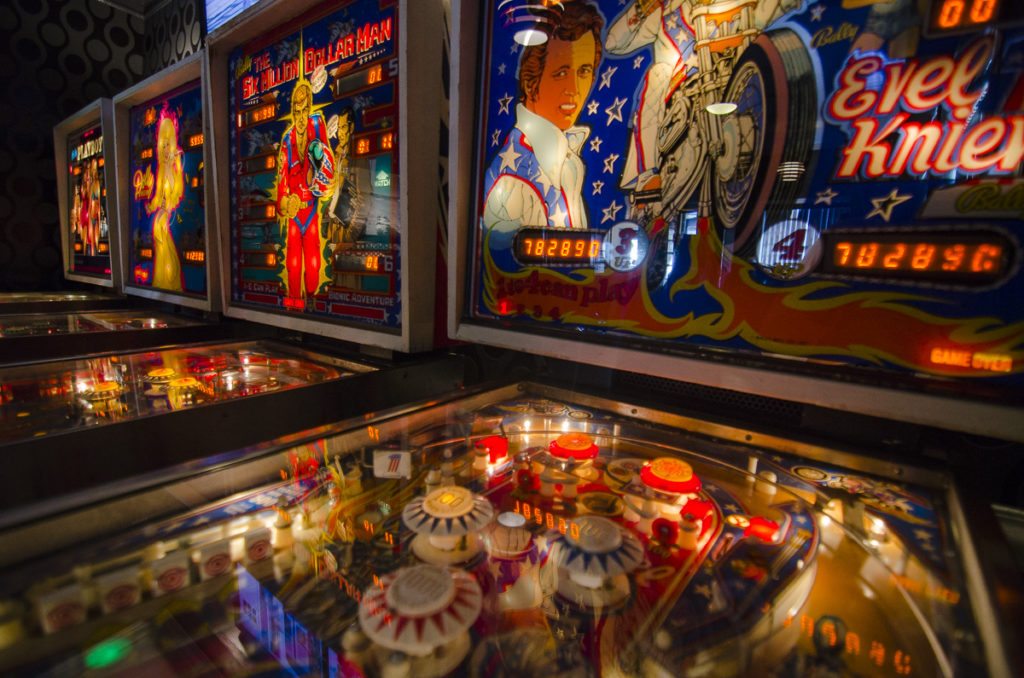 One of Louisville’s best kept secrets is pinball. All over the city are machines with bells ringing and score counters breaking hearts. Kids are making out against them. Longstanding friendships are being fostered and dashed one quarter at a time. It’s funny how popular the game really is in this city, yet how unaware many people are of its presence. As a life-long enthusiast, and resident of the River City, I set out to chronicle the more-prominent locations in town where you can play the game.

Zanzabar
2100 S. Preston St.
zanzabarlouisville.com
Zanzabar is the premier pinball spot in Louisville. Hands down. They keep about 15 tables out in the bar, at any given time, and they’re always rotating. I’ve been told they own upward of 70 tables, so if you go there one month and don’t like any of the games, come back the next month. I doubt you’ll have that problem, though. Any day in Zbar, you’ll see the late-1970s Bally games that everyone loves, along with the early-1990s Star Wars table, Medieval Madness, Star Trek Next Generation, Big Guns and Diner as well as the recently-released The Hobbit machine. Almost every era of pinball is represented here. I can’t think of anything better to do in town on a Tuesday night than to play in the weekly tournament. If you do buy in, be ready to be out late.

New Wave Burritos
3311 Preston Highway
newwaveburritos.com
New Wave is bringing Louisville some of the dopest food around. Its delivery menu has caused quite a stir in Germantown, Old Louisville and Audubon Park for the past year or so, but its brick-and-mortar store opened just a few months ago. It’s a charming place: multicolored walls, piñatas hanging from the ceiling and portraits of a certain new-wave legend. While you’re waiting on your food, you can pass time playing on its two pinball machines: Genesis and Whirlwind. Genesis is, hands down, the most aggravating game I’ve ever played. It’s a lot of fun, but those ramps are unforgiving. Whirlwind is great every time you play, though it takes a good minute to learn the nuances of the game.

Haymarket
331 E. Market St.
haymarketwhiskeybar.com
This bar is hard to get a grasp on because most places are just one thing, but Haymarket is not only one of the world’s greatest whiskey bars — it’s also a fantastic music venue. It hosts various weekly events such as a Vinyl Night, which takes place on Monday nights, and some sort of free chili thing on Wednesdays. Spy Hunter, Strikes and Spares and The Incredible Hulk are the more classic pinball tables on its roster. While those who seek out post-System 11 games will also be happy to find Doctor Who and Red & Ted’s Road Show. Overall, it’s a pretty laid-back bar, with a world-class whiskey selection.

Recbar
10301 Taylorsville Road
recbarlouisville.com
If I’m not mistaken, this is Louisville’s newest place to feature pinball machines (opened April 15), and its selection is pretty rad (nine tables). There are a couple machines that I’ve never seen before — the one that really blows my mind though is the Gottleib machine Strikes and Spares (not to be confused with the Bally machine, which is also awesome). There are no ramps or bumpers on this machine: It’s set up just like a bowling lane, complete with ball catches next to each bumper. Recbar also has Tee’d Off, the new Ghostbusters machine and The Who’s Tommy Pinball Wizard. Plus, and its blackened fish sandwich is the truth.

Mike Linnig’s
9308 Cane Run Road
mikelinnigsrestaurant.com
Mike Linnig’s is the American dream. A seafood joint on the bank of the Ohio, established in 1925 and passed down through generations of servicemen, Mike Linnig’s is a family-friendly place, with a playground next to the picnic tables that cover the outdoor dining area (it has an outdoor bar, too). It has a small game room with a crane machine and a couple other things, but among them is the 2007 Family Guy pinball table. Honestly, I could write another entire article about my visit to this spot, but the table plays really well, and the fried catfish is pretty great (the portions are huge). This table is also kind of special, because it has a raised, smaller playing field with its own ramps and smaller balls.

Third Street Dive
442 S. Third St.
The name says it all. Do you like cheap drinks? Are you near Third Street? Have you been looking for a bar that serves Mickey’s Big Mouths? This is the place for you. Third Street Dive has bands almost every night, graffiti everywhere and two pinball tables. Both of its selections are newer machines — The Walking Dead and Scared Stiff. I’d never played Scared Stiff before I went to this bar. It’s an Elvira-themed machine with a spinning wheel — a spider that activates special features — on the back glass. One of the more fun machines I’ve encountered recently. It has some pretty vicious multi-ball features.

Eastern Bowling Alley
825 Eastern Boulevard, Clarksville, Indiana
This spot takes a short drive over the river, but it’s worth it. You’ve been to a bowling alley before. I don’t have to pitch that to you. Snack bar, shoe rental, crane machine, all that. It has six pinball tables and the most interesting (to me, anyway) was the one that’s tucked away in the corner — SlugFest. Manufactured in 1992, apparently it used to dispense baseball cards for high scores. This game only has one flipper, and there are buttons for you to select which pitch is sent to you. It plays like an actual game of baseball with lit up runners on the bases.

Wash-O-Rama
1125 Bardstown Road
If you’re like me, and sometimes just want to chill without running into anyone that you know, play some pinball and relax, go to Wash-O-Rama on Bardstown road. They’ve got a Cueball Wizard table, and they’re open until ten. Plus, you can do laundry while you play.