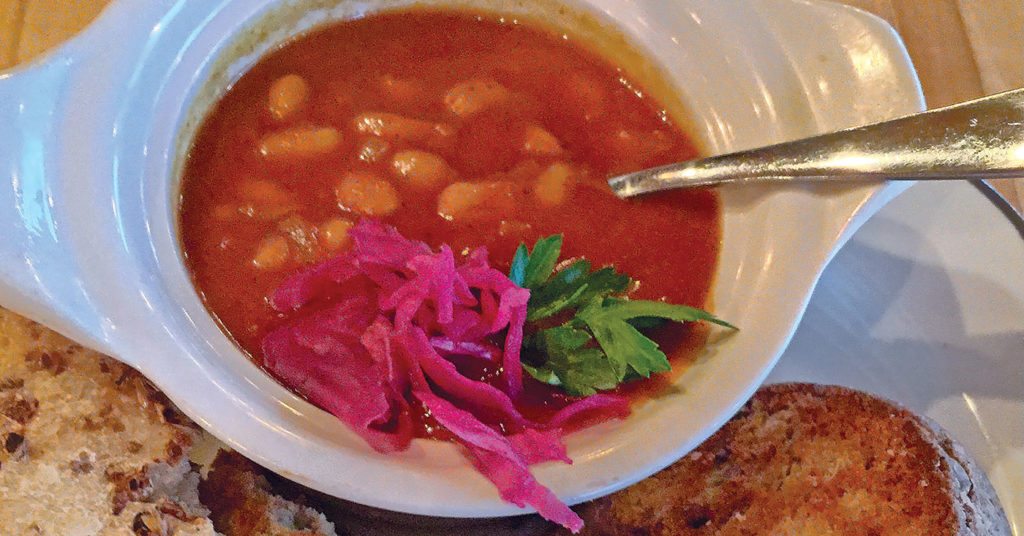 Welcome, Louisville newcomers, and by that I mean anyone who’s been here less than five years or so. First, a quick lesson in the way we give directions around here: Monnik Beer Co. is located where the old Zeppelin Café used to be. If that doesn’t nail it, then Zeppelin was where the old Heitzman’s Bakery used to be.

Now, let’s talk about Monnik, the newish brewpub that added another bright light to the glowing constellation of excellent Germantown-Schnitzelburg eateries when it finally opened the week after Thanksgiving last year, after more than three years in the planning.

I couldn’t find a thing not to like. The beer? Its roots are in the highly regarded Beer Engine in Danville, Kentucky, famously slaking the thirst of the Centre College community and beyond since, well, 2011, and earning beer geeks’ praise ever since. Monnik’s head brewer Scott Hand, imported from Cincinnati’s Urban Artifact, with help from Monnik co-owner Brian Holton, is brewing up a really excellent range.

We sampled several, grateful for the five-ounce tasting glass option, and I’m eager to get back and try the rest. Beers are also available in standard pints and growlers. Mild George ($1.25) is made from bread and tastes like whole-wheat beer, yeasty and rich and low-alcohol. I swear Churchill’s Bitter ($1.25) tastes exactly like the traditional bitter in English pubs. Hauck’s Pilsner ($1.50) was so good that we had two: It’s a fine golden German-style pils named for the iconic Germantown corner grocery, home of Germantown’s annual dainty contest.

The mood and the style? I felt comfortable as soon as we walked in the door. A thorough renovation has left the storefront, with its big glass windows, well-rooted in its community. Sit down, and look around the simply-decorated room with its long bar, comfortable chairs and sturdy wooden tables, and you’ll have a hard time believing that this hasn’t been a neighborhood watering hole since grandpa was a pup.

Attractive light fixtures made with antique-look light bulbs might even take us back to great-grandpop or beyond. Squares of tin ceiling material have been repurposed into wall hangings, because — why not?

So, what about the food? A cozy pub with great beer doesn’t need anything special in the culinary department, right? Wrong. Chef Meghan Levins, formerly of 211 Clover, Taco Punk and more, has put together a fine menu that looks a bit like bar fare at first glance, but ramps it up with chef-driven flavors and creative additions, like crusty bread made with the “spent” grains left over from the brewing operation.

The fourth member of the team is co-owner Ian Luijk, whose Dutch heritage offered the name Monnik, Dutch for monk, likely recalling Holland’s and Belgium’s long heritage of monastery beers.

Chef Levins’ menu is as affordable as pub grub should be: about a dozen items, plus daily specials, and many of which can serve as small plates or bar food, and priced to sell. The bill of fare tops out at $15 for Sauerbraten, and $12 for smoked trout salad. Almost everything else is $10, or less.

Just as in beer-crazy Belgium, fries are a specialty, and they are excellent, hand-cut and double-fried, served in generous portions in three renditions: flavored with curry ($6), Flemish beef stew ($8), or, our choice, War Fries ($7), topped with a mix of house mayo, chopped onion and a spicy Southeast Asian-style peanut sauce.

‘Fess up, now: Did you ever eat Underwood’s Deviled Ham out of the little round can? If you liked that oddly-intriguing American paté, I think you’re going to love Monnik’s potted ham hock ($8). Perhaps a more appetizing comparison would be the pork rillettes at the late, lamented Blind Pig. Either way, this is a small jar filled to the brim with finely shredded, rich ham, melded into a paste with pork fat and a tangy bite of something that reminded us of sauerkraut juice. It was topped with a layer of sweet-hot apple-butter mustard that played nicely with the rich ham concoction. It was served with big chunks of that delicious spent-grain bread that had been toasted on the grill.

Curry beans ($6, or $8 with bacon, $9 with sauerbraten) was built on very well-cooked large white beans, neither grainy nor mushy, swimming in a thick, reddish sauce with a pleasant, but not overpowering curry flavor that went particularly well with the Churchill’s Bitter. It was served with soda bread that I could have eaten by the loaf: Earthy whole-grain flavors were baked in a short, cake-like bread that fell into chunks, and I didn’t care. A side of pickled red cabbage ($3) was intensely flavored, sweet-sour and palate-cleansing.

A filling dinner for two, with four beer tastings, came to a very reasonable $31.27. Our server, Kayla, was friendly, bright and helpful, and never intrusive, prompting us to forget percentages and slip her a $9 tip. It’s always a good idea to kick up the standard tip percentage a bit when you get high-end service with an affordable dinner.