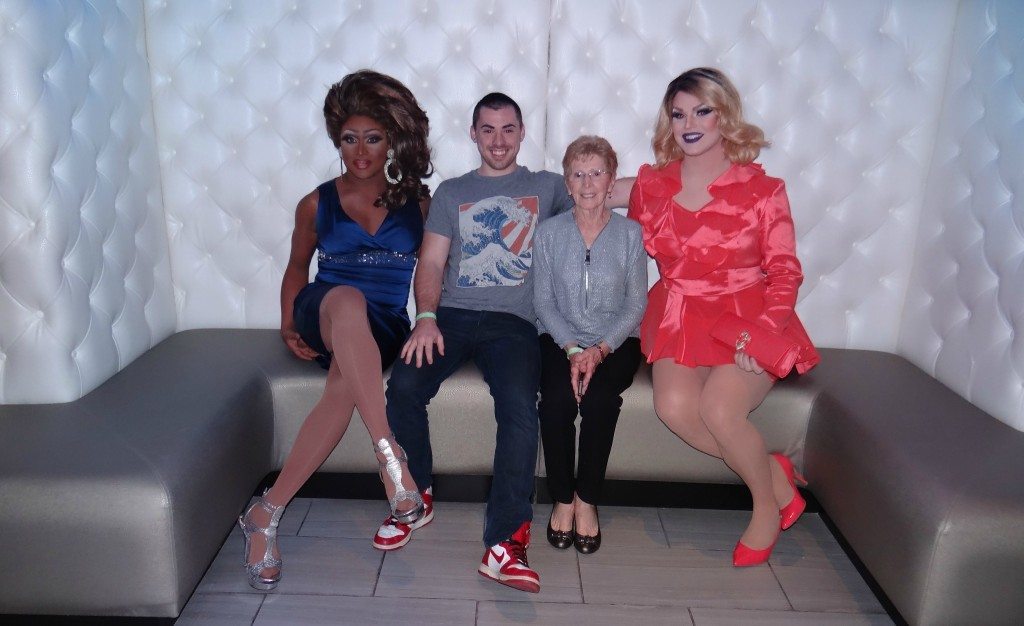 On stage, a drag queen does a sultry walk down the runway, letting everyone take in her sparkling, sheer black gown. She’s lip-syncing “#1 Crush” by Garbage, and clips of Baz Luhrman’s “Romeo & Juliet” play on the wall behind her. Behind me I hear Marietta, my grandmother, say: “She’d look better if she lost those earrings.”

“Growing up all of my teachers were nuns or priests. We went to church every morning in grade school, and we went to an 8 o’clock Latin Mass on Sunday because that was children’s Mass,” Marietta recalled. “And you didn’t dare go to another Mass, because the nuns were watching, and you would get in trouble at school on Monday.”

So never did I expect that one day while blabbing to her about my obsession with the television show, “RuPaul’s Drag Race,” she would pop off with: “I wish I could go to one of those drag shows. I went to one a long time ago when I was 19, and I’d like to go to another.”

“Excuse me?” I said, my jaw audibly hitting the plate of homemade biscuits and scrambled eggs below. Marietta explained that in her rebellious teenage years, she went to a traveling drag show called the “Jewel Box Review,” in her hometown of Toledo, Ohio.

I couldn’t believe it.

Not only had my grandmother, who says Hail Mary’s as much as she breaths, been to a drag show, but she had been to one before me.

You read correctly: Despite my obsession with “RuPaul’s Drag Race,” and my personal love of gender-bending and outlandish fashion, I was still a drag show virgin.

It was clear to me what had to happen next. I had to ask my grandmother to go with me to a drag show.

So I found a show at PLAY Louisville, and that night we watched as people made dollar bills rain on scantily clad drag queens. We also had a frank discussion, grandson to grandmother, about the evolution of her views on the LGBTQ community. And how she went from a strict Catholic who never questioned the church, to someone who embraces everyone without discrimination.

“This is all against my religion, and yet I love it,” Marietta said, as we sat in a booth watching two male dancers seductively tango on stage. “I think this place is great. I think the people are great, and it’s fun. Is it wrong for me to be here? I don’t know.”

Marietta said growing up she was never flat out taught to hate lesbian, gay, bisexual and transgender people. It was just something implied and never openly discussed.

“Back when I was a kid, no one ever said they were gay,” said Marietta, a Louisville resident since her teens. “And if they did, I’m sure everyone would have disowned them. My mother didn’t even like it when my friends would come over with their fingernails painted. She would say ‘Get that off! You look like you have blood on your nails!’”

I could almost feel my great grandmother’s hellfire gaze coming down upon me since I had painted my nails purple for the special occasion.

Marietta said the first time she can even remember being aware of LGBTQ people was when she worked as a nurse at Sts. Mary & Elizabeth Hospital, and the AIDS outbreak began.

“At the time, I worked with people who would refuse to treat babies born with birth defects because they believed that was the parents’ punishment for their sins,” Marietta said. “So you can imagine how some people felt about treating AIDS patients back then because everyone thought only gay people got it.”

But the only thing she saw were patients who needed help.

“When [AIDS] appeared, the patients who had it were so isolated, you couldn’t even touch them,” Marietta said. “But I saw how much their families loved them, and how sick they were. They were so very sick. It was terrible, because they’re just people like you and me.”

That opened her eyes to what people in the LGBTQ community had to endure. But helping the sick and needy is still well within Catholic doctrine, so she never really had to confront her feelings about the church, she said. Until the decision on gay marriage was issued by the U.S. Supreme Court, sparking a debate in the Catholic community.

“I had just found out that [someone close to us] was gay. And I went to church the next day, and father was giving this sermon about gay marriage,” Marietta said. “He was adamant that we do not support gay marriage, that the church doesn’t support it. And if you see a gay married couple, you shouldn’t treat them like they’re married.”

Marietta said she left mass that day with a profound disconnect, one that still troubles her now.

“I really believe in my religion. I’m really into my religion. It’s the way I was raised. But it’s not right to deny people a place to eat, or a place to live or the right to be happy,” Marietta said. “I could never see telling someone they can’t come to my church just because they’re gay. That’s crazy!”

Right about that time our conversation was derailed as a drag queen danced onto the stage with a skimpy dress that showed quite a bit of booty. After we got done discussing whether or not that was her real ass, we talked about being an ally, someone who doesn’t identify as LGBTQ but stands up for their rights, and how important allies would be in changing the minds of those in the church.

As the night came to a close, I asked Marietta if anything had been too shocking for her. She quickly said “No! This is fun! Besides, it isn’t any worse than Madonna.”