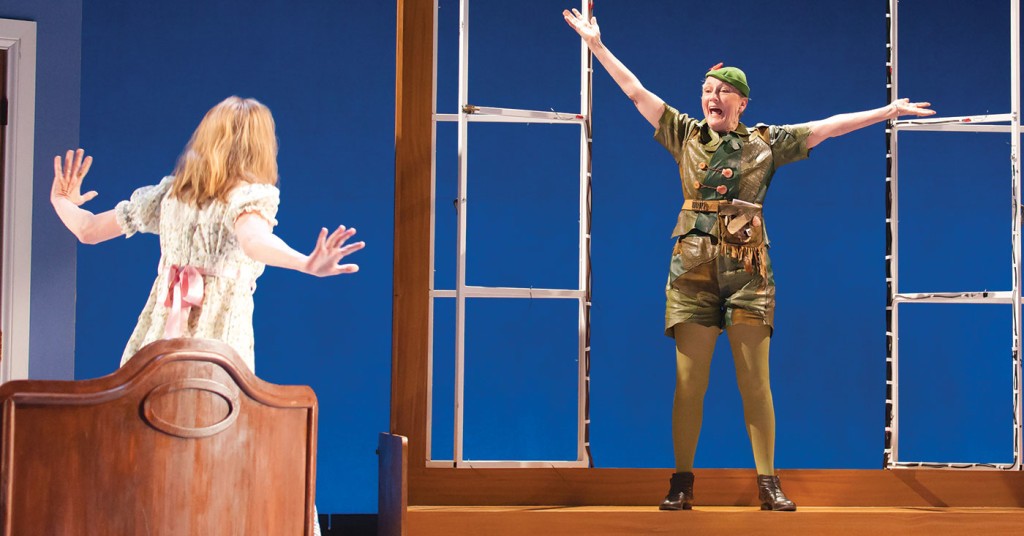 “Let’s not talk about that,” says Kathleen Chalfant toward the end of the monologue that opens Sara Ruhl’s new play, “For Peter Pan on her 70th Birthday.” It’s a monologue that begins with Chalfant — in her role as Ann — bursting on stage and announcing, “I’ll be playing Peter Pan.” Then she regales us with funny, richly detailed anecdotes of her young years in Davenport, Iowa, the city where she learned to act and learned to fly — at least on the stage.

But now it’s many years later. Ann’s family members laugh at the thought that she once played Peter Pan. With age comes loss. And the thing that Ann doesn’t want to talk about is death.

Death, it turns out, is the theme that unites both plays that opened last week as the second and third productions in this year’s Humana Festival of New American Plays at Actors Theatre of Louisville.

“This Random World,” by Steven Dietz, opens with a young, healthy, energetic woman named Beth (Brenda Withers) drafting her own obituary, explaining her funeral plans to her brother, Tim (Nate Miller), and calculating — like a hyper-caffeinated Nate Silver — the odds that she’ll die while on an upcoming trek to Nepal (if she survives the trip, she reckons, she’ll live into her 90s).

Ruhl’s “Ann” and Dietz’s “Beth” share a certain zest for life, but beyond that, their lives are radically different. Ann’s world was shaped by a loving, if contentious, family (her father never missed an opportunity to see her playing “Peter Pan”). Beth’s mother has always been willfully distant and disconnected — and her brother seems to be carrying on that tradition.

After Ann’s monologue, Ruhl plunges us into the life of her family. The curtains open to reveal a hospital room where her father (Ron Crawford) is hooked up to the usual beeping, buzzy gadgets while her brothers and sister (Scott Jaeck, Keith Reddin, David Chandler, and Lisa Emery), grasp whatever fragile strands of control they can find (the doctors in the family rush to the bed when the beeps summon them, but there’s little they can do). They distract themselves with news of their lives (last week, Ann finally managed to finish a New York Times crossword puzzle; a child is taking Pilates). They recount tales of youthful double standards (the boys got away with more than the girls). They revisit well-worn and loving discussions about whether their father favored one child over the other. They argue the politics of the time (the Clinton era — which yields some great nuggets of timely humor).

And though on the surface heir temperaments and values differ about the end-of-life decisions that face them, it’s clear that they share a deep compassion for one another. Still, Ruhl’s script isn’t sentimental. The hospital scene is a bravura piece of writing and virtuosic ensemble acting (under the leadership of Director Les Waters) right down the splendid, moving climax of the scene.

The action then moves to the family home, where a bottle of Irish whiskey loosens tongues and spirits at the wake (attended by the roving spirit of the guest of honor and his magnificent Irish Wolfhound). From this point forward, the action is disrupted by entertaining digressions and cleverly inserted allusions to the well-known televised version of “Peter Pan.”

Members of the Butler Traditional High School Marching Band bring lively color and punch to an interlude (several area bands will supply music over the course of the run). And eventually the wake gives way to a scene in which the creaky, arthritic siblings take on the roles of Peter Pan, Wendy, the Lost Boys, and Captain Hook — complete with aerial work. Funny, smart and compassionate — but never sentimental — this is a fabulous piece of theater with great production values (scenery, Annie Smart; costumes, Kristoper Castle; lighting, Matt Frey; sound, Bray Poor; and a fun bit of piratical combat choreographed by Drew Fracher).

Dietz’s “This Random World” inhabits quite a different universe. It’s set in a world of smartphones and tablets, where people get frustrated when their cell phones fail to get a signal in the highlands of Nepal, and where online funeral home message boards serve as virtual wakes.

If that sounds a bit bleak, don’t be troubled. “This Random World” also happens to be one of the funniest plays ever to premiere at the Humana Festival.  It’s a comedy of manners and errors, and farcical coincidences.

After Beth (the number-crunching traveler) sets off for Nepal, her brother Tim (at Beth’s prompting) starts reading the obituaries of people who share his name. On a whim, he pens his own obituary, hacks into a funeral home site and replaces a real obit with his own — then watches as the memorial tributes start rolling in — including a heartfelt message from Claire (Renata Friedman), the lost love of his youth.

Claire and her boyfriend (Todd Lawson) have just ended their relationship in one of the best break-up scenes you’ll ever see. If you’re curious about the theory and practice of the contemporary break-up, you have to see this play. And if you’re a fan or student of comic acting, you absolutely must see Friedman in this role. She brings an astonishing precision to every gesture and line: you’ll never forget the way she handles a piece of leftover quesadilla in the break-up scene — or the way she interacts with Tim when they meet at the same joint.

That said, this is strong, well-directed (by Meredith McDonough) cast from top to bottom. As Beth and Tim’s closed-in mother, Scottie, Beth Dixon is imperious and brisk in her treatment of her personal aide and traveling companion Bernadette (Shirine Babb). And as Bernadette’s sister Rhonda, Deonna Bouye has a brilliant turn as the funeral home clerk on duty when Tim shows up in an effort to have his fake obituary yanked from the web (she’s heard tales that sometimes the wraiths of the recently dead show up at the funeral home office). Technical credits: scenery, Daniel Zimmerman; costumes, Kathleen Geldard; lights, Paul Toben; sound, Christian Frederickson.

For Peter Pan on her 70th BirthdaY / This Random World
Both plays run through April 10
Actors Theatre of Louisville
316 W. Main St., 584-1205
actorstheatre.org