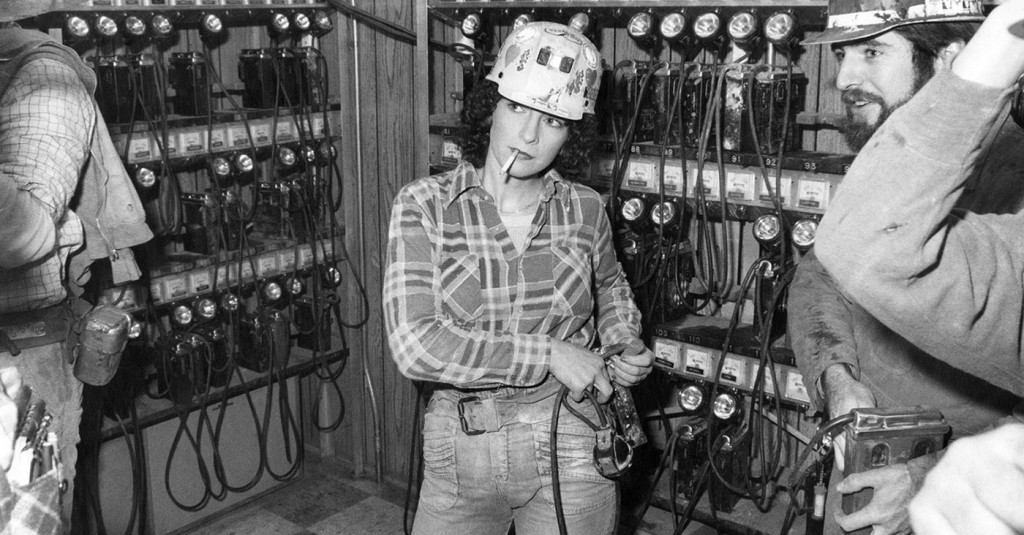 "Woman Coal Miner Getting for the Shift. Consol Westland #2 Mine, Pennsylvania" by Ted Wathen

To some people today, coal is a four-letter word. But not in 1979 and not to former President Jimmy Carter. “Coal was seen as our national energy solution,” says photographer Ted Wathen. “The United States had a 300-year supply of coal. If properly developed this would be our answer to the OPEC oil embargo.”

“Coal – 1979” is an exhibition of over 50 black and white photographs Wathen took while on assignment for the Carter’s Commission on Coal. “President Carter sought to stabilize the coal industry that had been plagued with wildcat strikes, union corruption and industry intransigence,” Wathen states. “Both the United Mine Workers of America (UMWA) and the Bituminous Coal Operators of America wanted to stabilize production.”

Four photographers, including Wathen, fanned out across America to document the lives of the coalminers. Wathen traveled around for six months in a Volvo station wagon shooting in Kentucky, Ohio, West Virginia, Pennsylvania and Illinois. The Commission on Coal’s report, “The American Coal Miner: a Report on Community and Living Conditions in the Coalfields,” included the images.

“One of the reasons that the UMWA wanted this report done was that they wanted to counteract the national image of coal miners being poor, illiterate and downtrodden,” he explains. “At the time of this report, union coal miners were the second highest paid industrial workers in America. Generally I found the miners I dealt with to be happy with their stations in life, happy with their income and happy with their prospects. But, and this is a caveat, the miners I photographed were all in the union, and the mines I photographed were amongst the best-operated mines in the country. At the same time there were a number of marginally safe or unsafe mines, and a great number of non-union miners who did not enjoy the benefits of being a UMWA miner.”

The photographs and negatives are now part of the National Archives collection. The exhibition at the Photographic Archives consists of Wathen’s personal set of prints including a few that had not been shown before.

They are as technically sound as his photographs always are. Where Wathen excels is in content (“I learned to let the content speak to me and that became the art.”) As a result, what they do best is let us into a world we think we know but probably don’t. For instance, I was surprised to see women working in and around the mines.

“Women were just starting to come into the mines when the Commission did [its] work,” he says. “Generally they were accepted — and sometime not. One mine I photographed was full of nasty sexual graffiti directed at a woman miner. The woman in [‘Woman Coal Miner Getting Ready for the Shift. Consol Westland #2 Mine, Pennsylvania’] has such a presence that you can tell that no one is going to screw around with her.”

In the photograph “Caroline Nelson. Coal Truck Operator. Amax Sunspot Mine, Vermont, Illinois,” Wathen says, “Caroline was driving a huge rock truck, one that has 10 foot tall tires. I was told at the show opening that mine owners like having women operate heavy equipment because they were less abusive to the equipment than men.”

The mines were also integrated by race. “There are a number of photographs in the show that have African-Americans,” he states. “1979 was before the Hispanic influx, so not Hispanics.”

This slice of life content comes about because Wathen spent a lot of time with the miners, “going to work with them in the mine, going home with them, socializing with them, going to church. Saturday night and Sunday morning.” The close proximity to his subjects resulted in photographs like “Little League Ball Player. Beckley, West Virginia,” “Former Company Houses, McRoberts, Kentucky” and “Miner Racking Pool Balls After His Shift. Powhatan Point, Ohio.”

After all this work, did he get to meet President Carter? “No, I never got to meet Jimmy Carter, although my daughter-in-law, Amy Cook, did work for him at the Carter Center.”