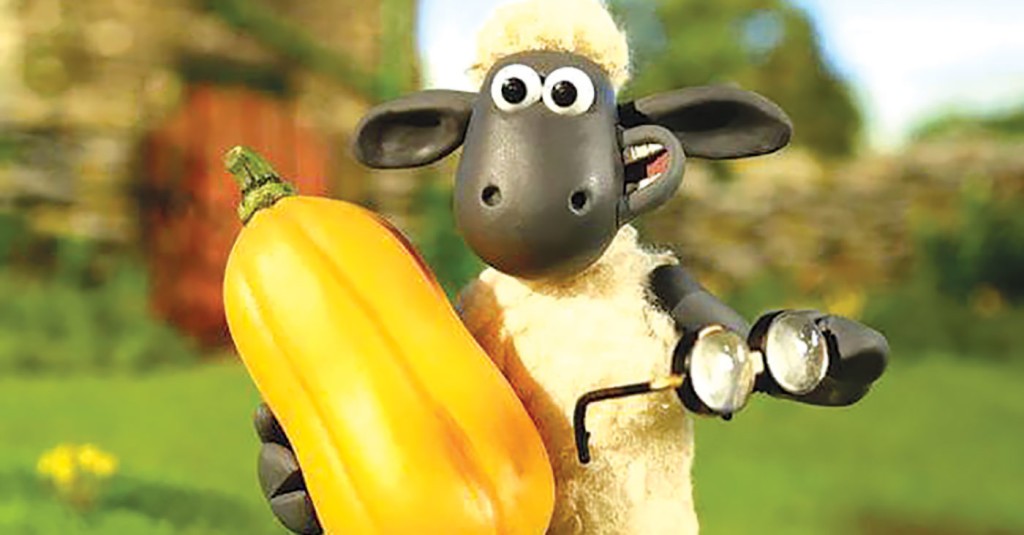 A CHRISTMAS HORROR STORY
2015; $29.98; UR
Does the town of “Bailey Downs” ring a bell? Fans of “Ginger Snaps” and “Orphan Black” should recognize the name. The creators of those two fine pieces of outre crafted this entertaining horror anthology that mines the truly bloodthirsty history of our “holy” holiday to great effect, with William Shatner linking the pieces together as the town’s late-night DJ. Cap’n Kirk is in his element here, casting tales of Krampus (St. Nick’s child-eating companion), a kid possessed by forest spirits who aren’t happy about their sacred tree being removed, zombie elves and more, all interleaved to create a dizzying and truly un-cool Yule. Arguably the best holiday horror since “Gremlins.”

SHAUN THE SHEEP MOVIE
2015; $24.98; PG
We have been drooling idiots over Shaun The Sheep since at least 2008, when his little Limey pantomime claymation shorts first appeared in America on Disneyl. Here Nick “Wallace And Grommit” Sparks gives Shaun and his woolly pals free rein to run amok in the Big City, taking delicious pokes at hipsters, authority, and human society in general after The Farmer gets a nasty bump on the head and winds up an … international hairstyling sensation! If you were amused by that other recent too-good-for-kids movie of late, you’ll pee yourself over this. Hands down, our favorite movie experience of 2015.

GHOST STORY
1981; $21.98; R
Nearly lost amid all the slashings and razor-gloves of the early 80’s, this stands above as one of the best damned horror films we know. And it succeeds by sticking to classic tropes populated by some of the greatest actors in history: Fred Astaire, Melvyn Douglas, Douglas Fairbanks Jr., and John Houseman (sadly, all now deceased). They are the Chowder Society, an assemblage of rich, successful elders who tell ghost stories and share a diabolical 50-year old secret — which now demands otherworldly vengeance! Alice “Queen of the Borg” Krige is terrifying and hot! as the beautifully ghastly woman, with Patricia Neal and Craig Wasson along for the ride. Now on Blu-Ray; a must-own.

1971
2014; $17.98-24.98; UR
In this era of Edward Snowden and the NSA, we’ve forgotten that in 1971 eight everyday, run-of-the-mill Americans broke into a Pennsylvania FBI office and took every damned file in the place. Then, with law enforcement across America baffled, they mailed the top secret files to hundreds of news outlets, revealing for the first time the breadth of illegal, systematic abuses of power — including unconstitutional search-and-seizures, spying, intimidation and sanctioned murder in the name of (largely corporate) “national interests!” And no one ever discovered who the “Media 8” were. Until now, as they come forward in this thrilling doc that reveals not only the effect of their “crime” on the American experience, but how much worse the abuses have become. You should be furious.

BLOOD AND LACE
1971; $21.98; R
The Drive-In Era ended rather badly, devolving into cheezy porn satires and blood-soaked horrors with none of the wit and excitement of early 60’s fare. This culter was from those dying days, a prelude to the Jasons and Freddies to come, with former silver screen great Gloria Grahame (“It’s a Wonderful Life,” “Oklahoma!”) as the sadistic mistress of a crude orphanage. That’s where lovely Melody “F Troop” Patterson finds herself after her parents are brutally murdered by a hammer-wielding psycho — and now he’s after her! Watch for Vic “Alice” Tayback and Len Lasser (Uncle Leo from “Seinfeld”), plus Dennis “Django Unchained” Christopher.

NO ESCAPE
2015; $34.98; R
Pierce Brosnan has apparently given up making mainstream movies, now satisfied with low-budget cameo-driven crowd pleasers. Case in point: This family-on-the-run chase flick starring Owen Wilson, Lake Bell and child-stars Sterling Jerins (“The Conjuring”) and little Claire Geare. Wilson moves his brood to some poorly-researched Southeast Asian hell-hole for work just as a coup takes place — marking them all for death! They and Brosnan race for their lives toward the American Embassy as crazed gunmen take over the streets.

RICKI AND THE FLASH
2015; $31.98; PG-13
You must watch this movie. Why? Not because it stars Meryl Streep as an aging rock star; not because it was written by Diablo “Juno” Cody; and not because it’s directed by Jonathan “Silence of the Lambs” Demme. You must watch this movie because it co-stars Rick Springfield — and every minute that he spends making movies is one less minute he’ll be on stage somewhere pretending to be a rockstar! Read our lips, ladies: He’s a freakin’ actor. He’s just acting like a singer: The man couldn’t carry a tune in a freakin’ bucket, and if he wasn’t so damned cute you would never have heard of him. But we digress. Co-stars Kevin Kline and Streep’s daughter, Mamie Gumme. Good movie. Bad Springfield.

A FRENCH VILLAGE: SEASON 1
2009; $39.95; UR
Better known around the world as “Un Village Français”, this is an extremely popular French dramatic series set in the early 1940s, just as the Nazis were occupying rural France, setting those normally quiet, insular communities ablaze with undreamed-of turmoil. The various strategies the people used to cope with this intrusion informs every episode: some embracing the Germans, some fighting them, some trying to ignore them in hopes they’ll just go away. But in every case a life and culture that existed for centuries was shattered, and the people were left with only one fragile thing to ward off despair: Each other. A truly remarkable series; in French with English subtitles.

BLUE SPRING RIDE: COMPLETE COLLECTION
2014; $59.98; UR
We often praise anime for its ability to tell stories that are more real than reality, and this shojo (a story penned for a female audience) is a perfect example. A young girl and a very shy, retiring boy meet in middle school, then separate. They meet again in high school, but whereas the girl has simply grown and matured the boy’s personality has changed completely, to the point that he now seems wild and dangerous. Gloriously romantic nonsense with gorgeous, fluid artwork and a soundtrack you’ll be humming all day.

CAMILLA LÄCKBERG’S THE FJÄLLBACKA MURDERS, SETS 1 & 2
2012; $39.95; UR
You may recognize the name Läckberg, given that she is one of the most celebrated crime novelists of our generation, with many tales revolving around her alter-ego: mommy/crime-writing super-sleuth Erica Falck. Here Falck (Claudia Galli) returns to her idyllic coastal hometown only to find herself drawn into a dark undercurrent of human folly, often leading to murder. Simply terrific characters, plots and storytelling combine to make this collection of TV movies a standout. Example? Okay: In the first tale, “The Hidden Child”, a man appears on her doorstep claiming to be a brother she had never heard of! Before she can learn more he is murdered. Subtitled and simply terrific.

GATCHAMAN: THE MOVIE
1978; $24.98-39.98; UR
Five superhero ninja agents come together to fight as one in a future world falling under the domination of Galactor, an evil terrorist group possessing futuristic weapons and technologies, in this tale edited down from Japan’s “Gatchaman” TV series. A clever melding of live action and animation harking back to its predecessor, known in America as “Battle of the Planets” (aka, “G-Force”).

INSIDE AMY SCHUMER: SEASON 3
2015; $17.98-22.98; UR
We won’t argue that Amy is tasteless and offensive – hey, that’s why we love her! – but she is also quick, consistently brilliant, and rarely predictable. The definitive “big hot blonde”, she uses her trashy sexuality to lure you in, then smacks you over the head with … well, that ‘s the point, you never know what’s coming! She’s like the best date you ever had, though you pray she never calls you again. If we’re not making any sense it’s because we are gobsmacked by how inventive and just plain funny this is. A true original at the top of her form, history will celebrate her in the same breath as Richard Pryer, Robin Williams, and Jim Carrey. Get a front row seat.

INVADERS OF THE ROKUJYOMA!?: COMPLETE COLLECTION
2014; $34.98-59.98; UR
We absolutely love this anime series! At first it seemed to be just another “harem” fantasy: a lone, inexperienced young male becomes the servant/protector/friend of a group of comely, exuberant females, complete with oodles of harmless sexual teasing. The twist? The boy’s rented apartment, Room 106, turns out to be an intergalactic/interdimensional crossroads where extraterrestrials, ghosts, and demons routinely launch global chaos! Nice big-eyed-waif artwork and clever characters with chirpy little voices make this a guilty pleasure. Recommended.

JIMMY’S HALL
2014; $31.98-34.98; PG-13
British filmmaker Ken Loach (“The Wind That Shakes the Barley”) has made some of the most interesting, if unheralded, movies of the last 50 years. Here he follows ex-pat Jimmy (Barry Ward), run out of Ireland for running a – gasp! – village hall where people sang, danced, painted, wrote and shared whatever joy their lives held, something that the local vicar and his Fascist buddies found intolerable. Now older and wiser, Jimmy returns to Erin’s shores more determined than ever to continue his radical ways, finding that his opponents are also more determined to keep him out. Simply put: One of the best damned movies we ever saw: Lively, upbeat, exciting, joyous and profoundly sad. Don’t miss it!

LA CORDA D’ORO – BLUE-SKY: SEASON 2
2015; $59.98; UR
Most of the anime titles we mention are “Ecchi”: lighthearted, often playfully sexual in nature, usually based on manga/comicbook and computer games; loaded with action and weaponry. This one is different; it’s an “Otome”, with more linear, introspective storytelling and a focus on feelings and emotional growth. A young girl transfers to the prestigious Seiso music academy at the insistence of a childhood friend, where she plans to compete in a summer music competition. A gifted musician, she has secretly lost interest, and hopes the new school will help her decide what to do with her life. Will meeting new people and experiencing new ideas help her recharge?

THE NEW RIJKSMUSEUM
2015; $27.98; UR
Never heard of The Rijksmuseum? Us neither, but we learned that it’s considered one of the world’s finest museums. Located in North Holland, it contains what many consider to be the world’s greatest collection of Rembrandts, Vermeers, and Van Goghs (including his famous self-portrait). It went dark in 2003 for renovation, intending to open again in 2008, but inept and larcenous public officials, as well as a general populace who wanted the collection made free to the public once again, kept it shuddered, running up a half-billion-with-a-B$ cost overrun. This doc looks at the controversy and the collection, now that the museum has finally re-opened.

THE STORM MAKERS
2014; $17.98-24.98; UR
A documentary on institutionalized human trafficking in Cambodia, and how it feeds international sex-slavery – including American sex “tourism” – throughout Asia. One focus is on Aya, who at the age of 16 was sold as an unpaid Malaysian domestic. Two years later, after beatings, starvation, brutal toil, drudgery, and rape, she escaped with her newborn child – only to discover that she had nowhere to go and no one to turn to, just like an estimated 150,000 such slaves in Malaysia, Thailand and Taiwan. The other focus is on those often highly-respected ground-level kidnapper/procurers who profit from it all.